It’s Date night tonight and Himself and I are headed to the cinema to see “A Star Is Born”. 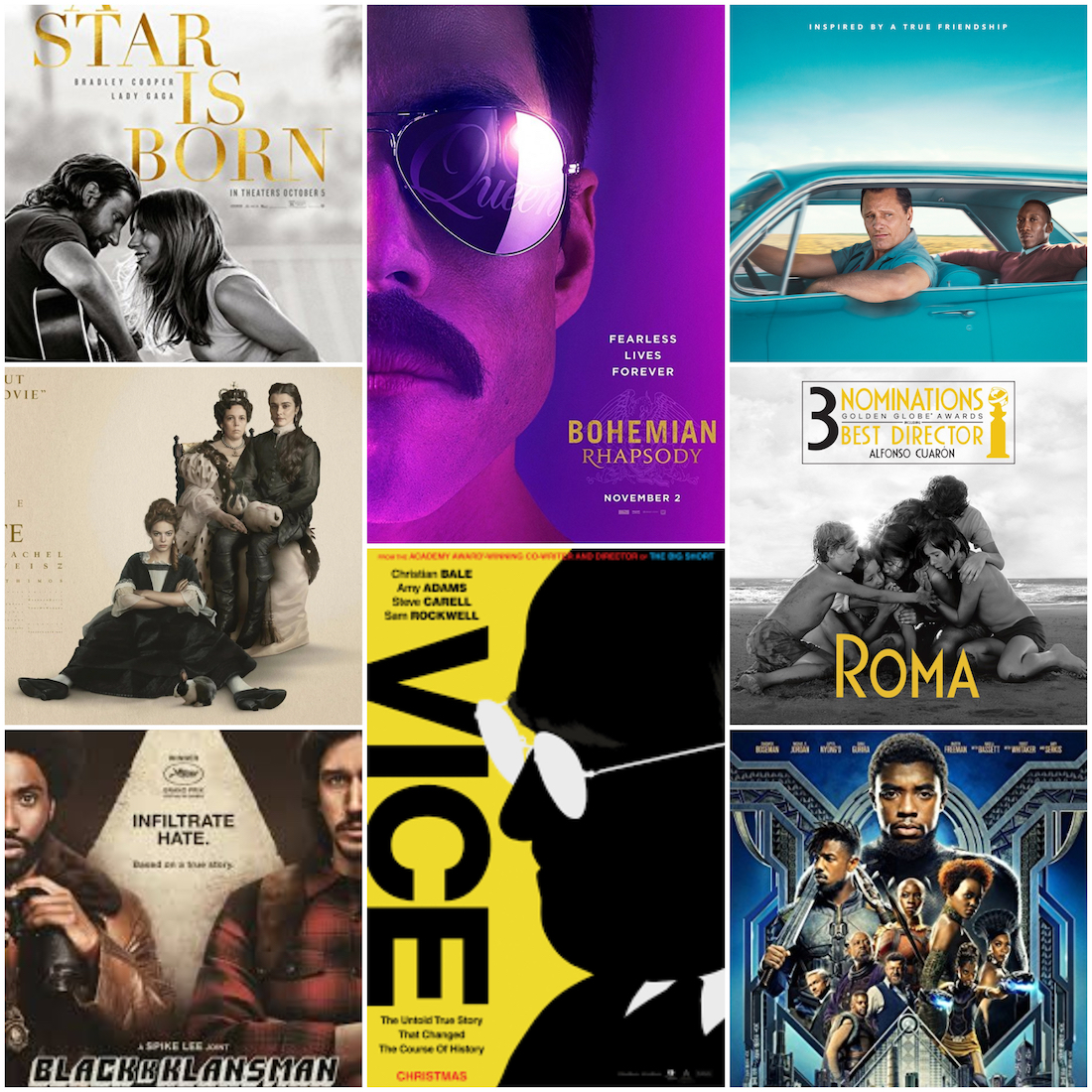 Getting ready for the Oscars requires one major thing in my book -> to have seen all the films nominated in the Best Picture category (it’s also vital as an Actress to be in the know of whats out there and to be able to talk about it!). Each year I do my best to see them before The Academy Awards night (which I stay up late for every year). Of the nine nominated last year, I managed to see eight beforehand. This year there are only eight nominations, so I am determined to see them all! I’ll be updating this post as I check them off the list, so come back again soon to see how I’m getting on and what I think of them – I’ll even name my top choice for the award after I’ve watched the eighth!

A STAR IS BORN

28/01/19 21:37
Oh gosh, I’ve been singing “Shallow” since we left the theatre and what a tour de force Bradley Cooper is – someone give this man an Oscar – I literally don’t care what for at this point but he’s just wonderful and should be recognised by the Academy in the not too distant future (…so like….February please?!). Both he and Lady Gaga were very watchable and I totally bought into their relationship. A completely heartfelt film.

04/08/18 10:30
Watched this on the plane to Portugal, really enjoyed it and can only imagine what a spectacle it was to watch on the big screen. Great performances by all, but I was especially enthralled by Danai Gurira‘s witty character delivery.

10/02/19 21:38
An African-American cop goes undercover with the assistance of a fellow cop (a Caucasian, Jewish man) in order to infiltrate the KKK in 1970’s Colorado. We are assured at the top of the film that this story is “based upon some fo’ real, fo’ real shit”. Brought to Spike Lee by “Get Out” creator Jason Peel, Lee’s Direction is deftly present within every frame and such a difficult subject matter is told with truth and honestly as it should be. There are also moments of real levity here which have again been deftly handled. Brilliant performances by John David Washington, Adam Driver and Topher Grace. Definitely one to watch.

17/02/19 21:00
Great film, thoroughly enjoyed it. Rami Malek is superb as Freddie, as are Gwilym Lee (Brian), Ben Hardy (Roger) and Joseph Mazzello (John) in their own respective roles. The recreation of LiveAid was my favourite section of the film and having watched a special featurette on the lengths everyone involved went to, to get things JUST right – I think it’s even more amazing. Also the music, I mean, it’s wonderful – always was, always will be.

04/02/19 18:30
Olivia Coleman is completely and utterly outstanding as the child-like, egotistical Queen. This film is not for the feint-hearted. It’s raw, it’s honest and it shows the worst of the monarchy in this fictional tale of what it really means, to serve. Emma Stone and Rachel Weisz make up the trio of this tale and all three are nominated for Oscars. If it was between solely between Rachel Weisz and Emma Stone, I think I’d be giving the gong to Ms. Weisz. Her performance is possibly the best I’ve ever seen her give (so far!) and I’m delighted to see she has been recognised at other award ceremonies in the lead up to the Academy Awards.

30/01/19 18:22
Wowza, beautifully shot, that opening sequence was a triumph in itself, I’ve never seen anything like that before, it was wonderful. The story itself took some time to get going for me, but I think that may have been because I was so interested in the goings on in the background of loads of scenes (that are stuffed full of supporting artists), so unless something whopper happened, I was a bit removed. That all changed 45mins from the end when there was sucker punch after sucker punch. All in all, this one is worth sticking with and it finished up quite as beautifully as it began.

22/02/19 20:00
Wowza – this film absolutely blew me away! All performances were excellent but for me it was the craftsmanship of the writing, the way in which the story was told and the Direction from Adam McKay. Just wow – honestly – I was not prepared to be as blown away as I was. But just wow. Go see this immediately!

My 2019 Best Picture is…TBC once I’ve watched all films!

Have you seen them all? Which film do you think will take home the award?