I have been to Aubaine in Green Park several times before but it doesn’t come close to Aubaine at Selfridges because here, the decor is something just a little bit special 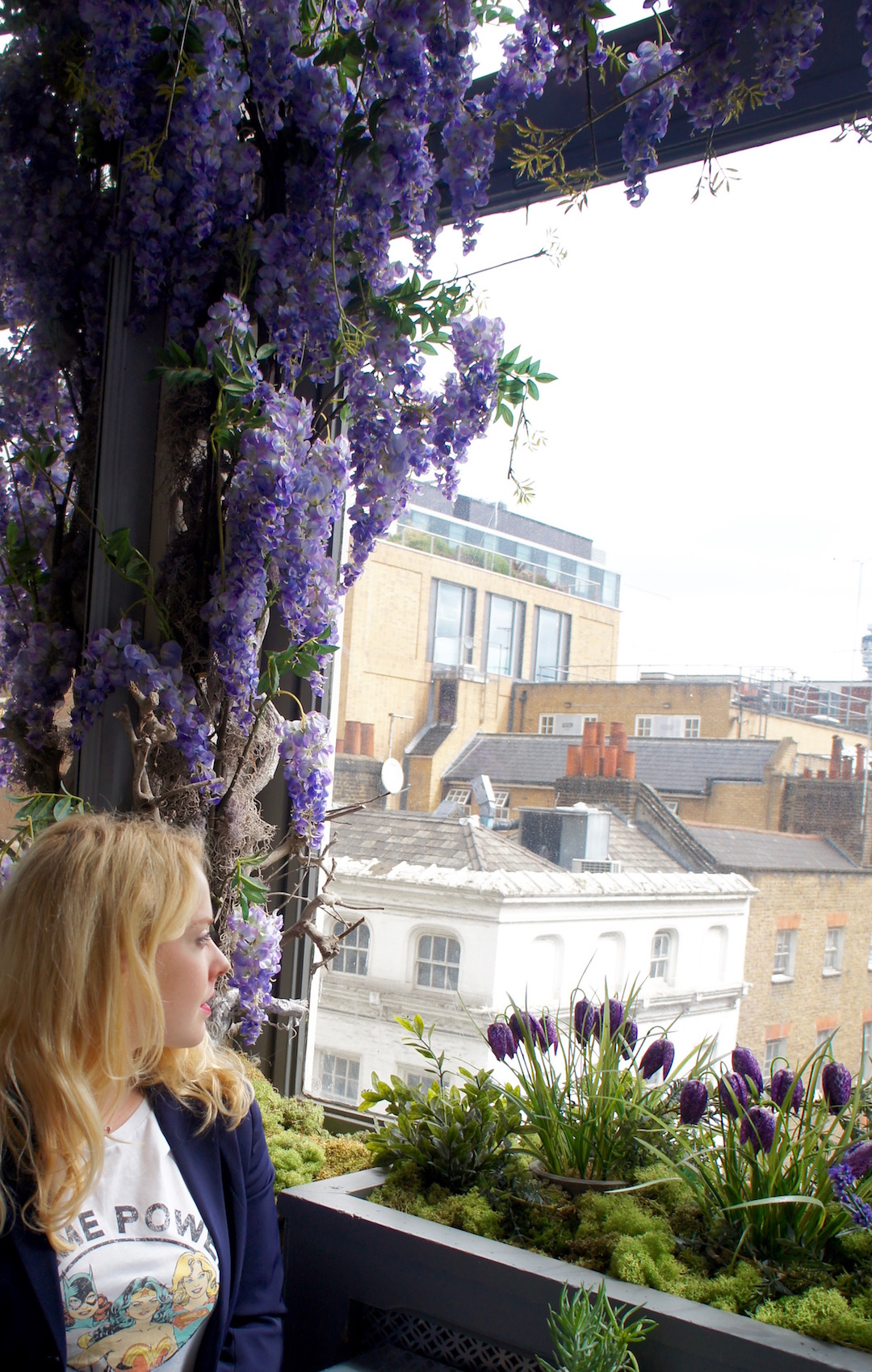 Another like minded individual is the gorgeous Betty, so she and I decided it was time we met up for a chin-wag and checked out the Instagrammable spot for ourselves!

Spoiler Alert: It’s a lot smaller than we thought 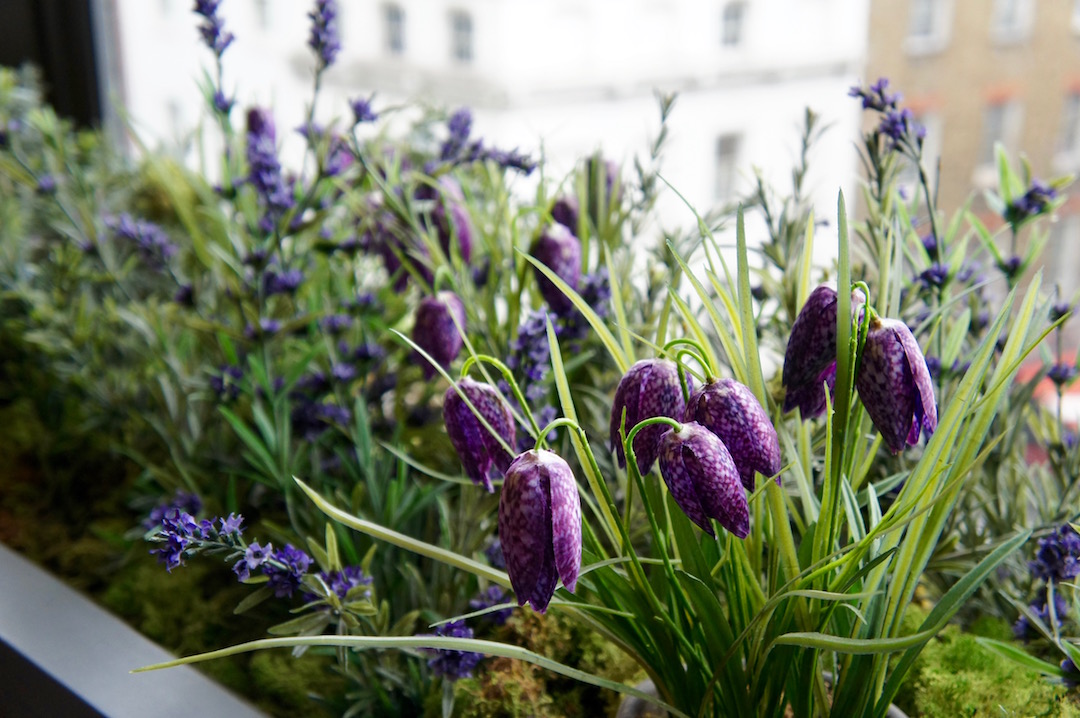 but gorgeous nonetheless, somewhat like stepping into a heavenly lilac marshmallow I reckon!! 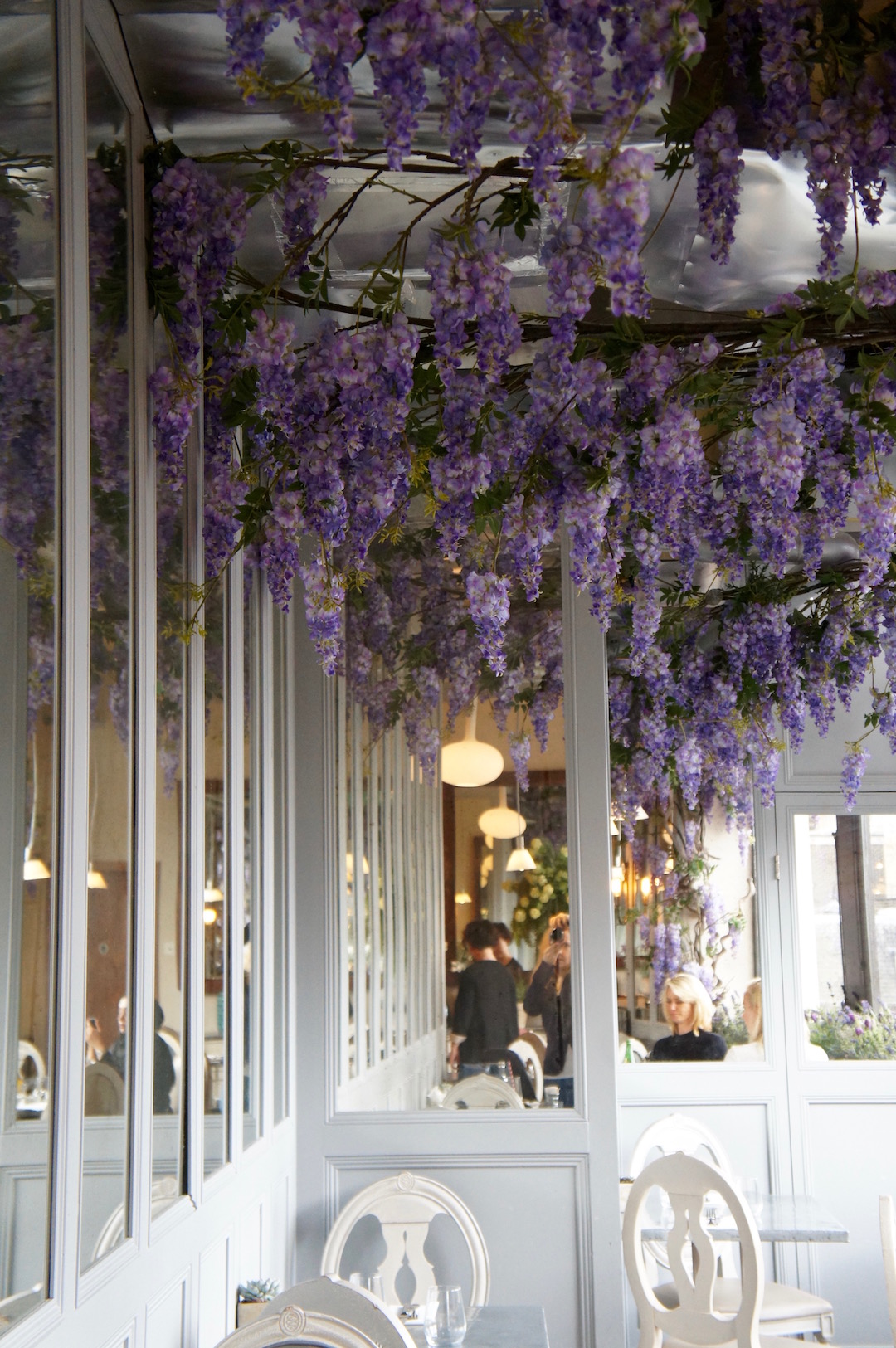 The tables are marble, the floor is tiled and the wisteria carpets the ceiling and some of the walls, so as far as breakfast destinations go, this place is pretty great! 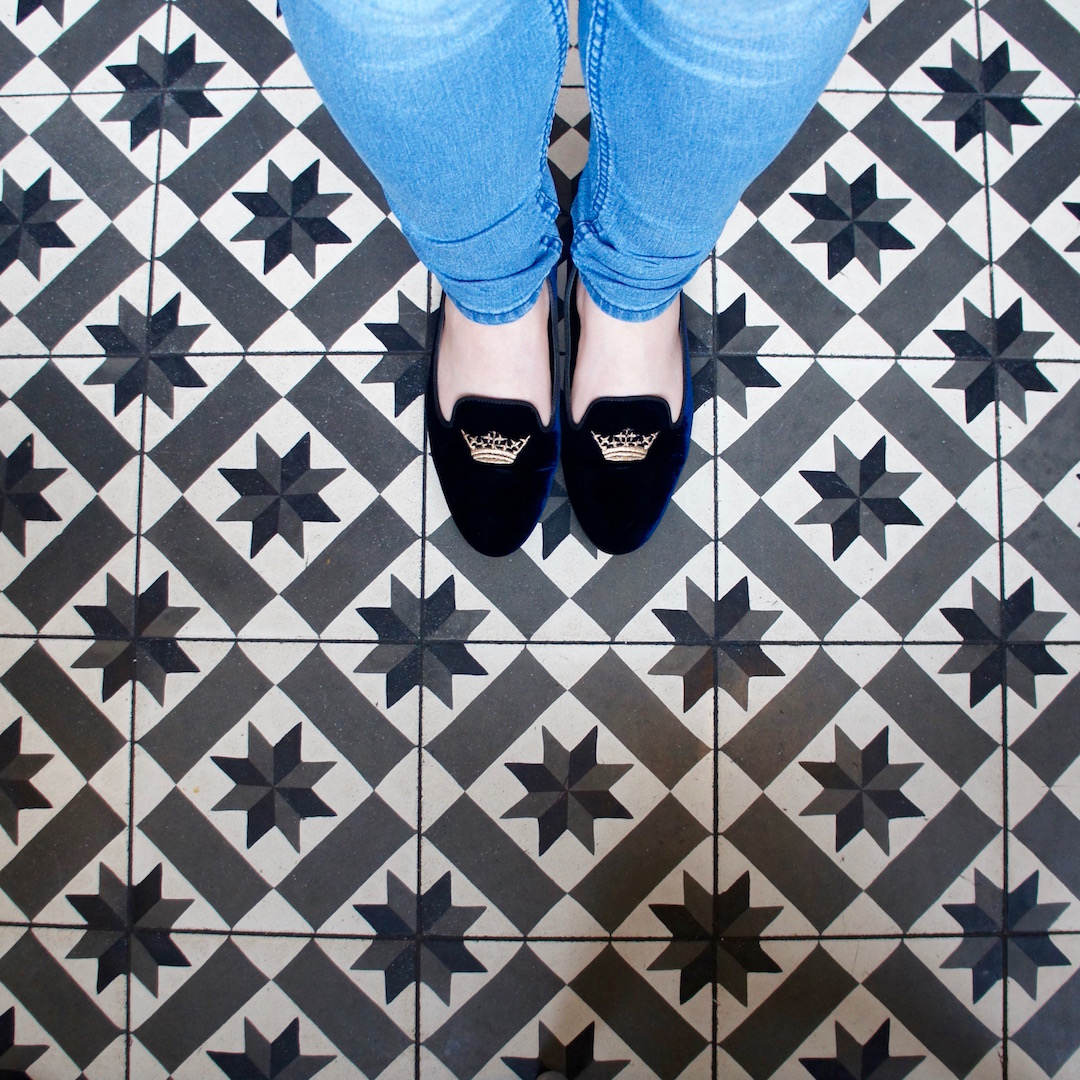 When we first arrived we had the run of the place – apart from two ladies who put my shutterbug-tendencies to shame. According to Betty who “caught the show”, they had poses, they had angles, they had a storyboard of looks and images, all to be captured before the light changed! 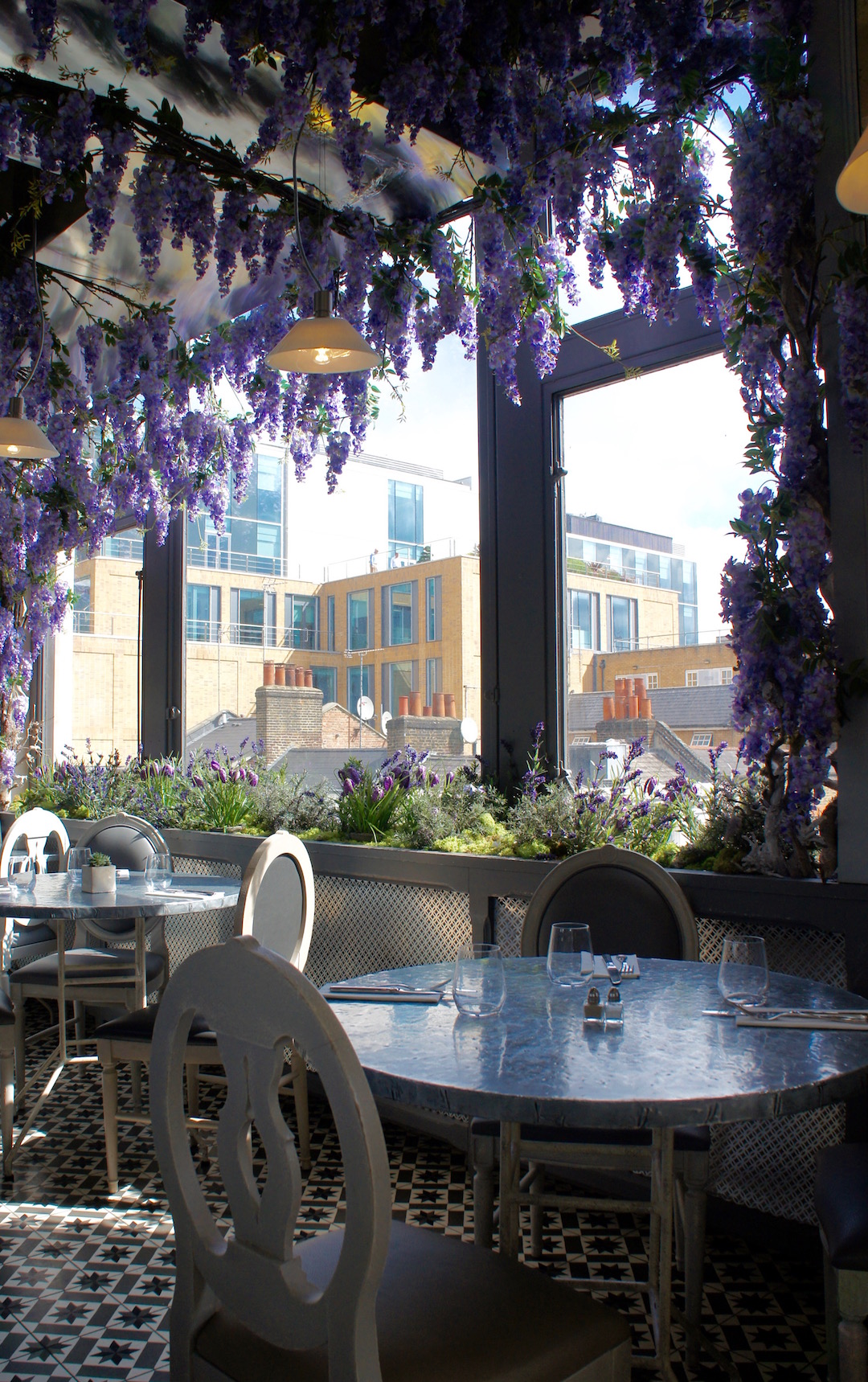 Meanwhile theres Betty and I, heads bowed, trawling through the menu, cause ya know…we have our priorities right! 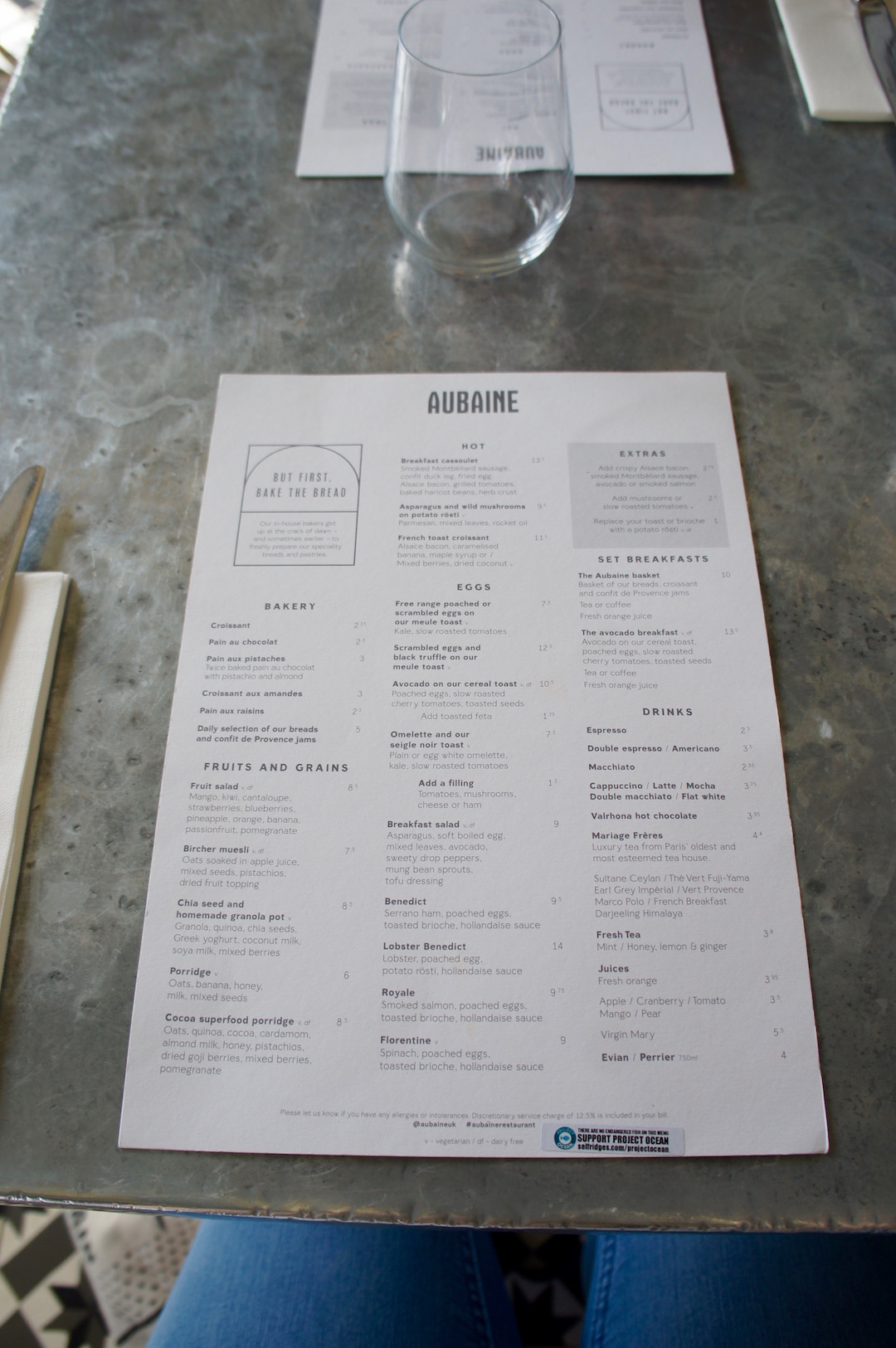 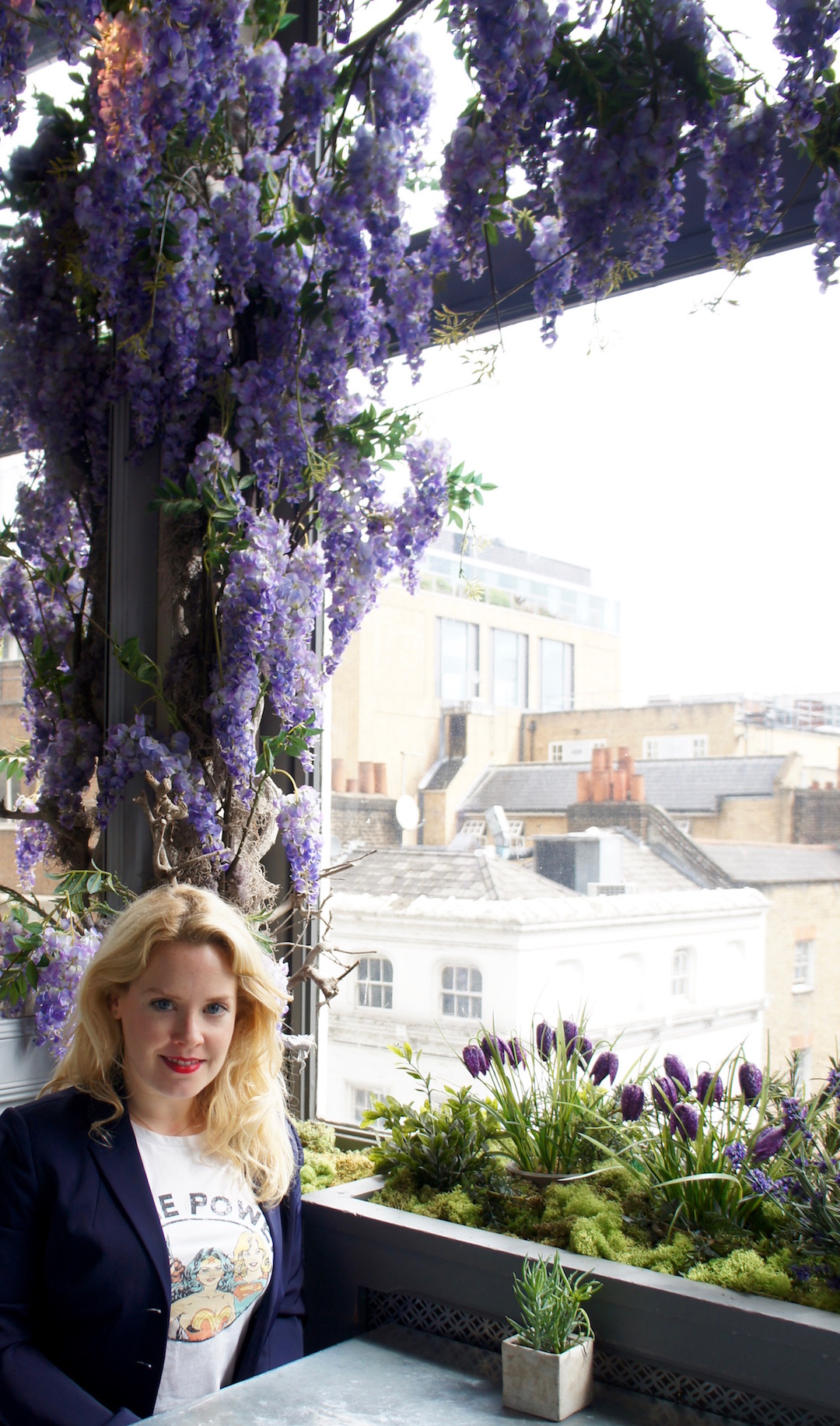 I went with one of their set breakfasts, so coffee (I ordered an Americano, but they had a shopping list of possible options) and freshly squeezed orange juice were brought simultaneously to the table to kick things off 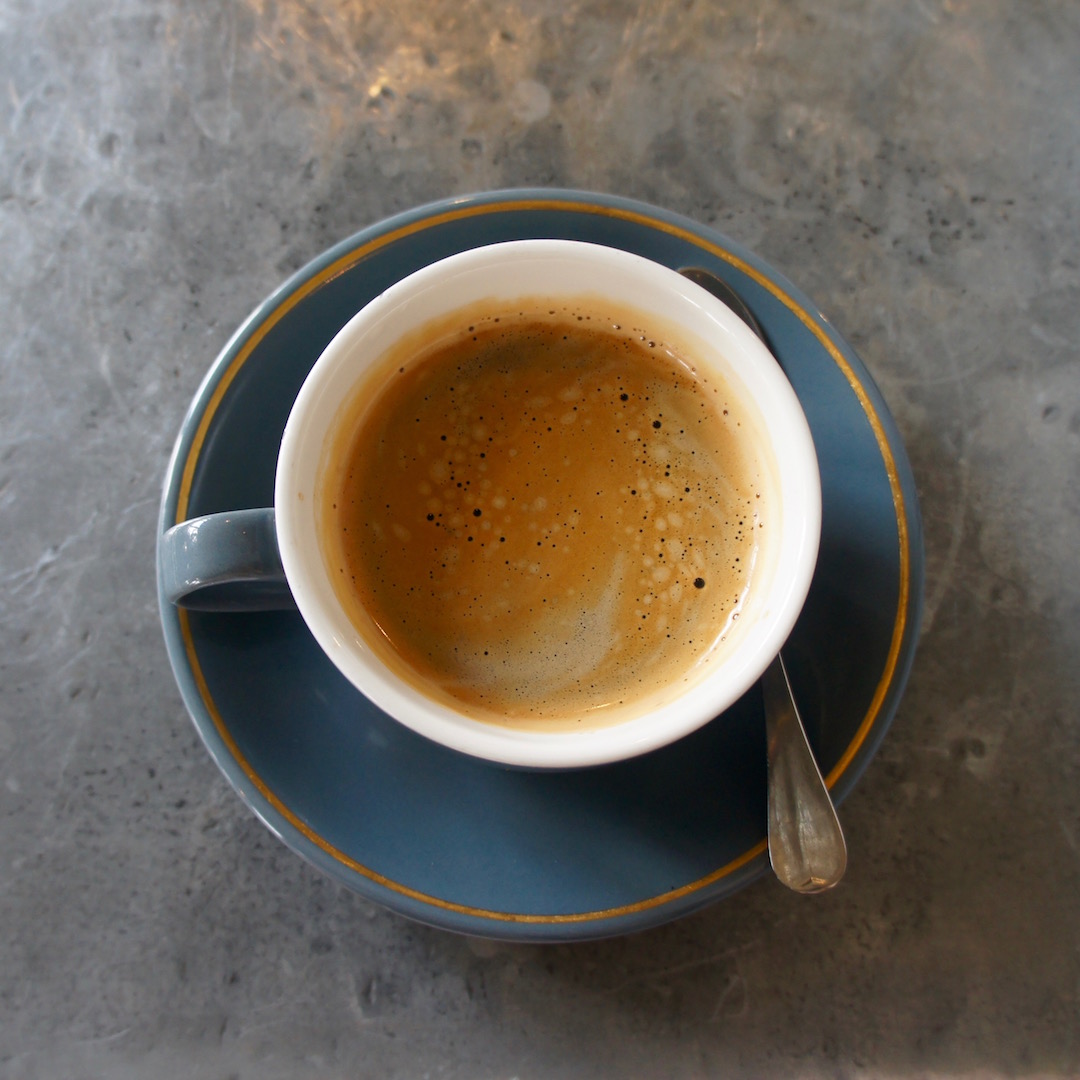 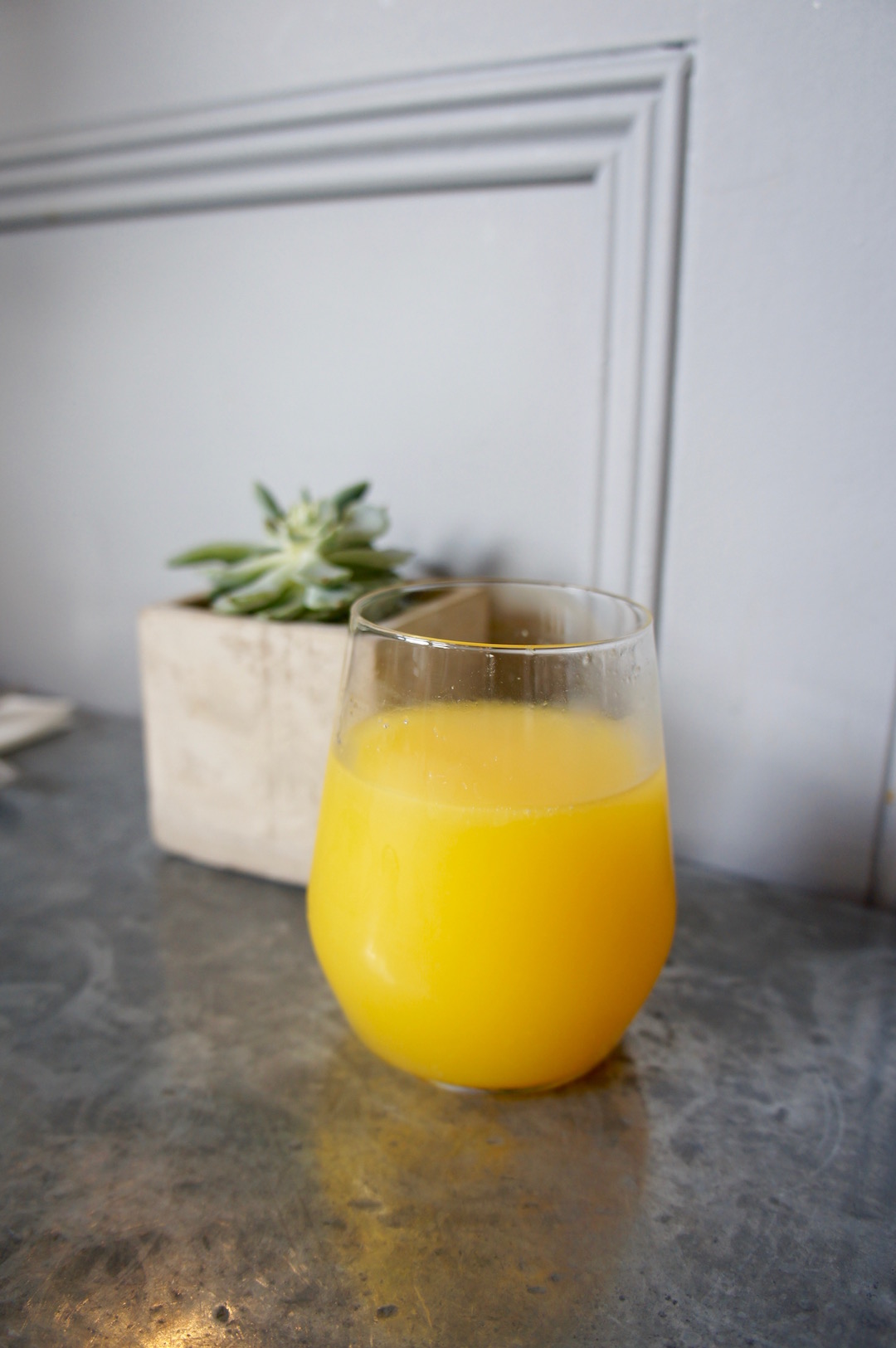 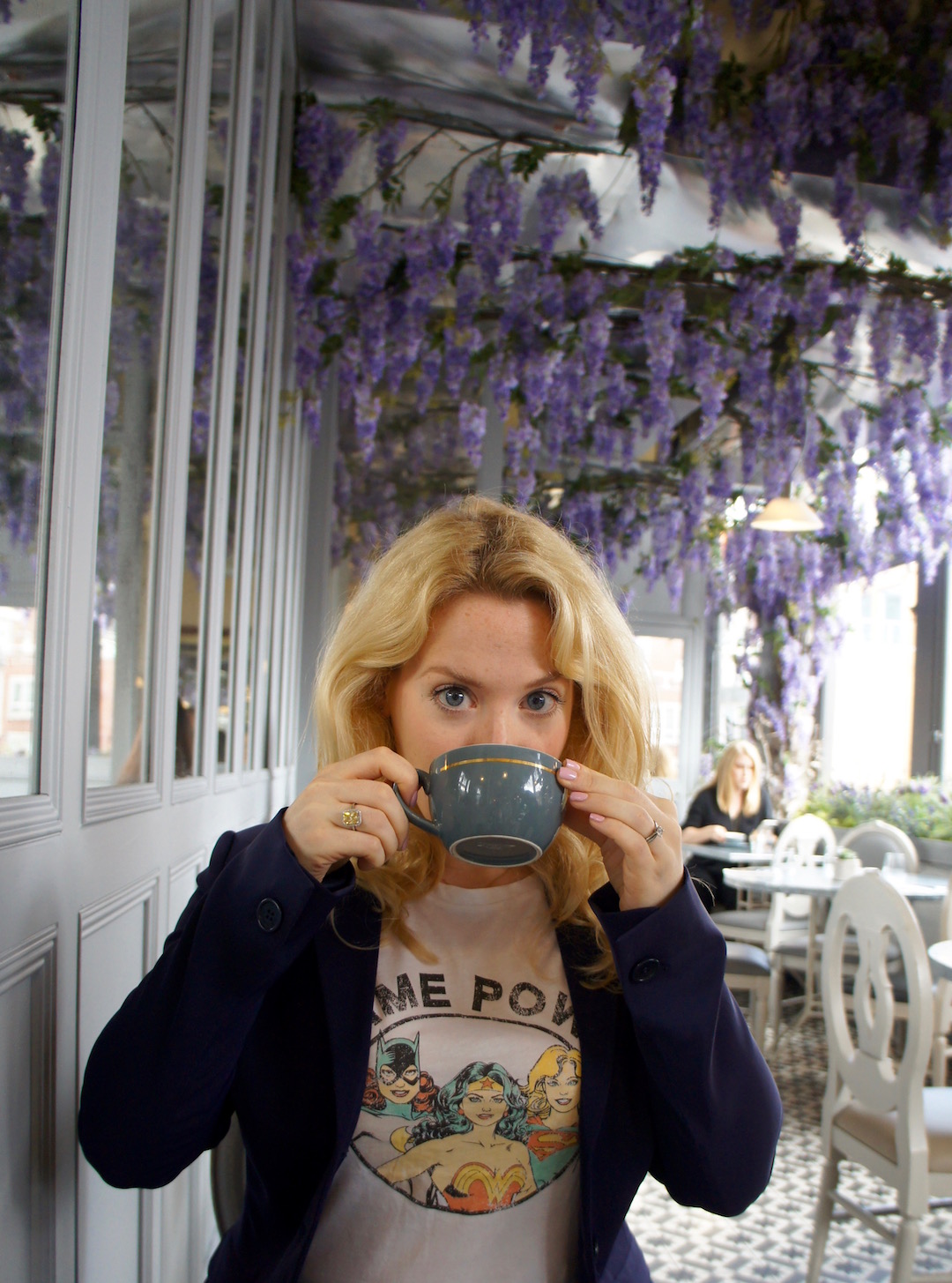 Side note: How great is this t-shirt? I fell absolutely and completely in love it when I saw it (a big thank you to Himself for spotting it!), I just knew I had to have it, wearing it with a blazer and killer flats had me feeling like a total boss all day long! Personally I’d rather if it had been fitted, I was wearing the XS and it was still very baggy but I can’t deny, it was SO comfy!! 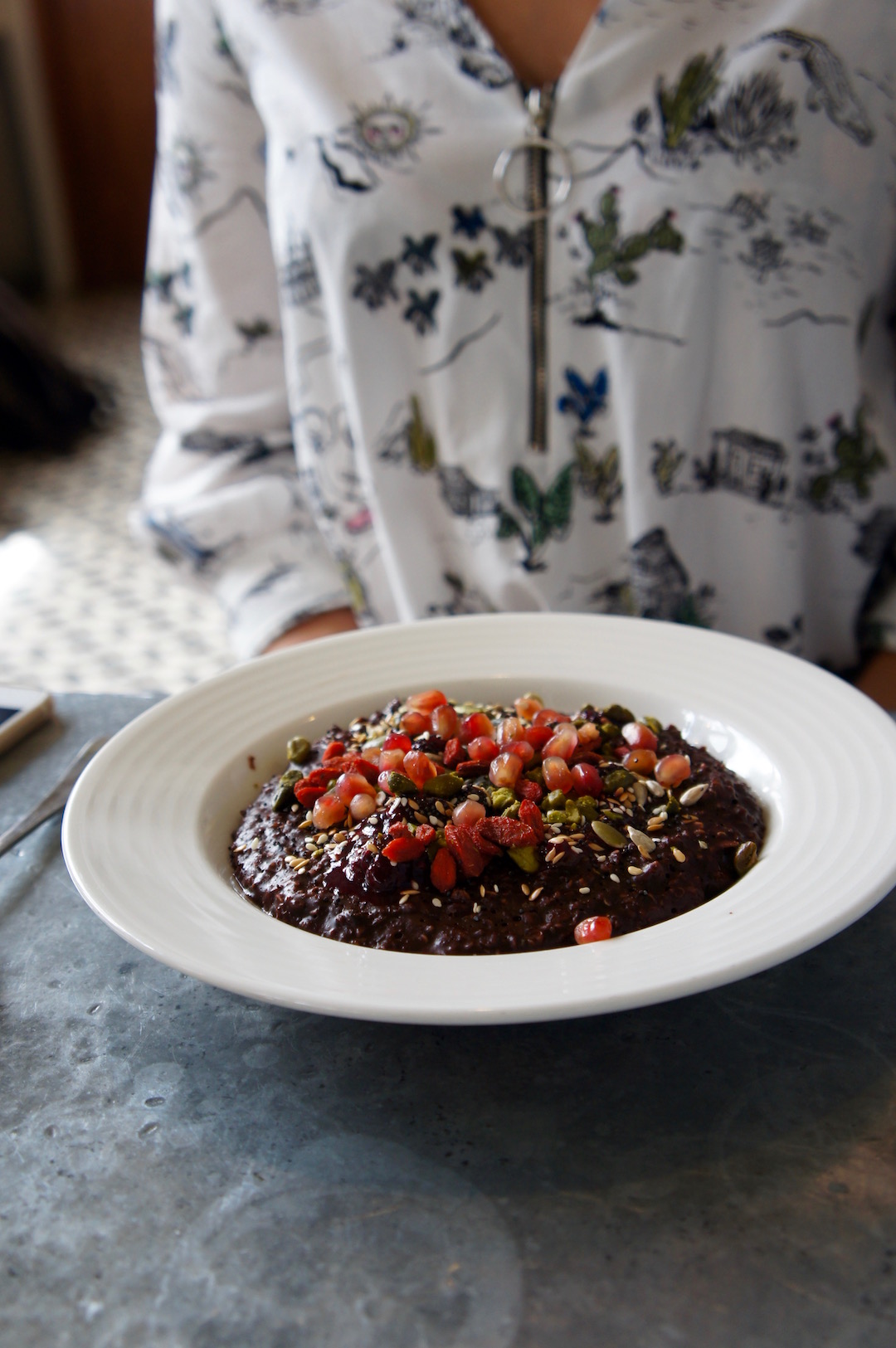 Anyway! Betty went for the Cocoa Superfood Porridge, which was packed full of oats, quinoa, cocoa, almond milk, honey, pistachios, dried goji berries, mixed berries and pomegranate with some cardamom to give it a kick. Meanwhile I, true to form, went for their Avocado on cereal toast with poached eggs, slow roasted cherry toms and toasted seeds. I mean – NOM! 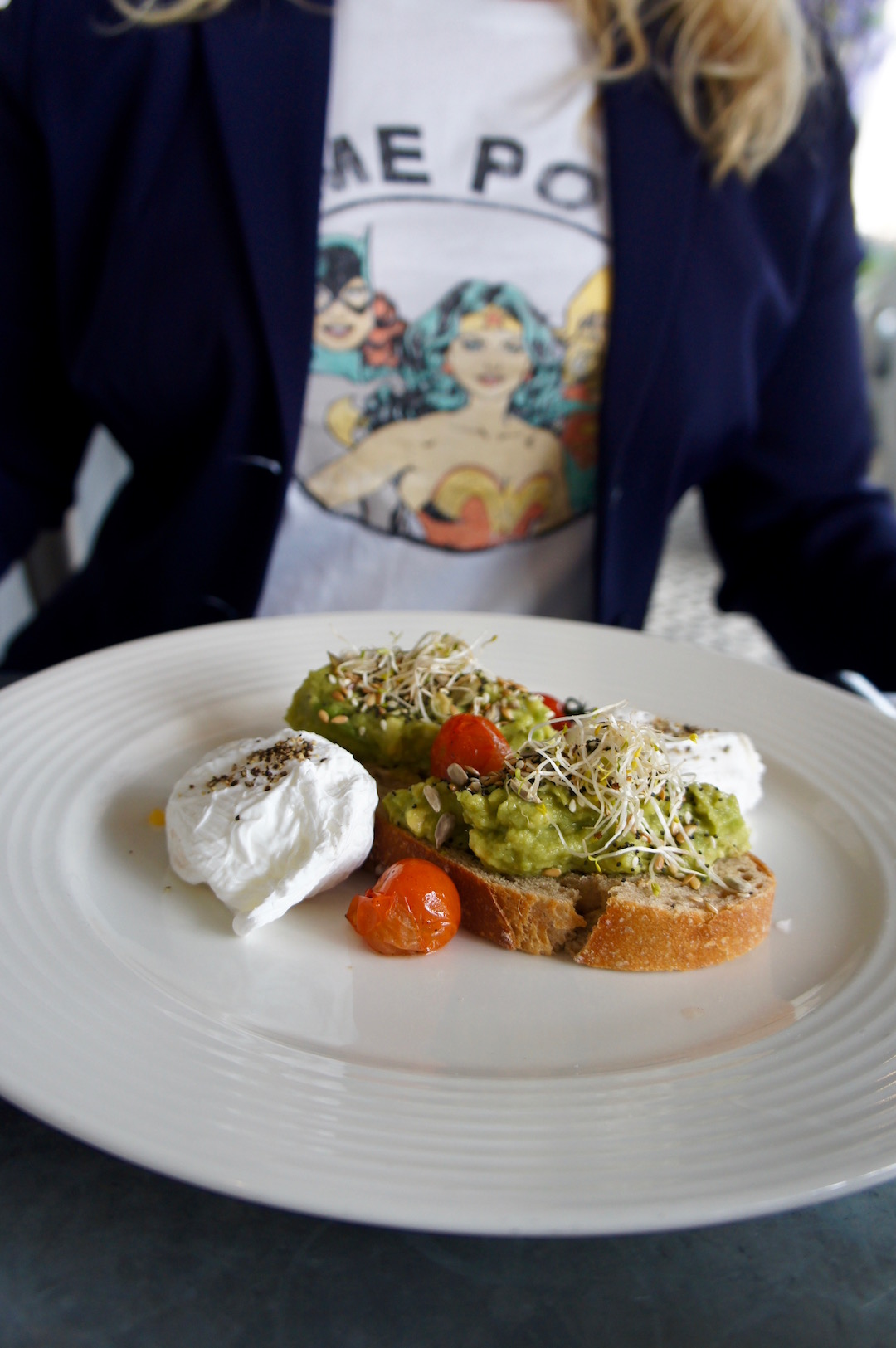 But seriously – I still don’t know what cereal toast is, I mean, I ate it, but it just tasted like normal sourdough bread to me…! Can anyone enlighten me on the difference? 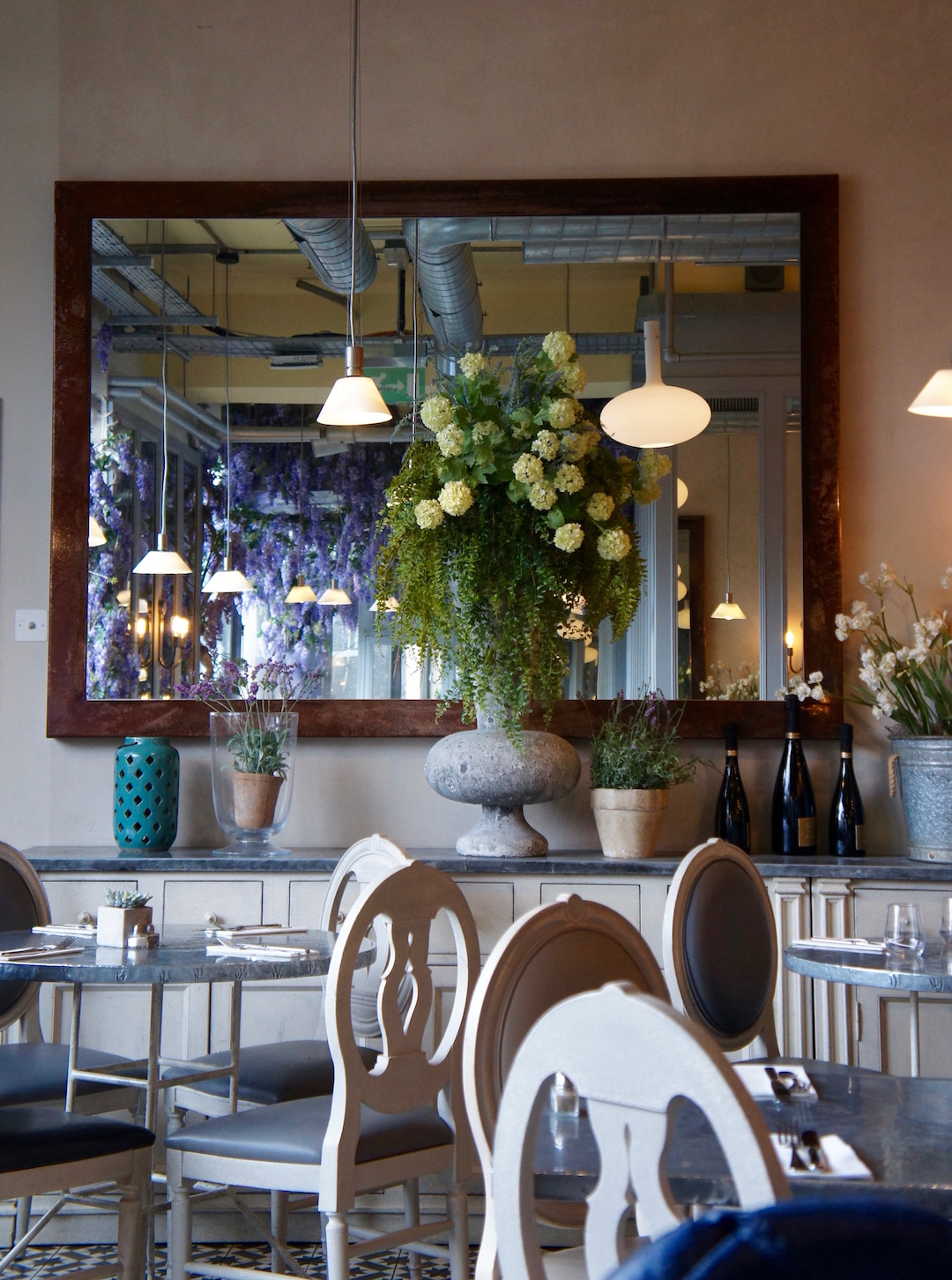 Also, can we take a second to fawn over my new glasses!?! They’re so different to what I’m used to (hello rectangular black frames for the past 10 years!), I felt like a change and these are definitely that – love them! 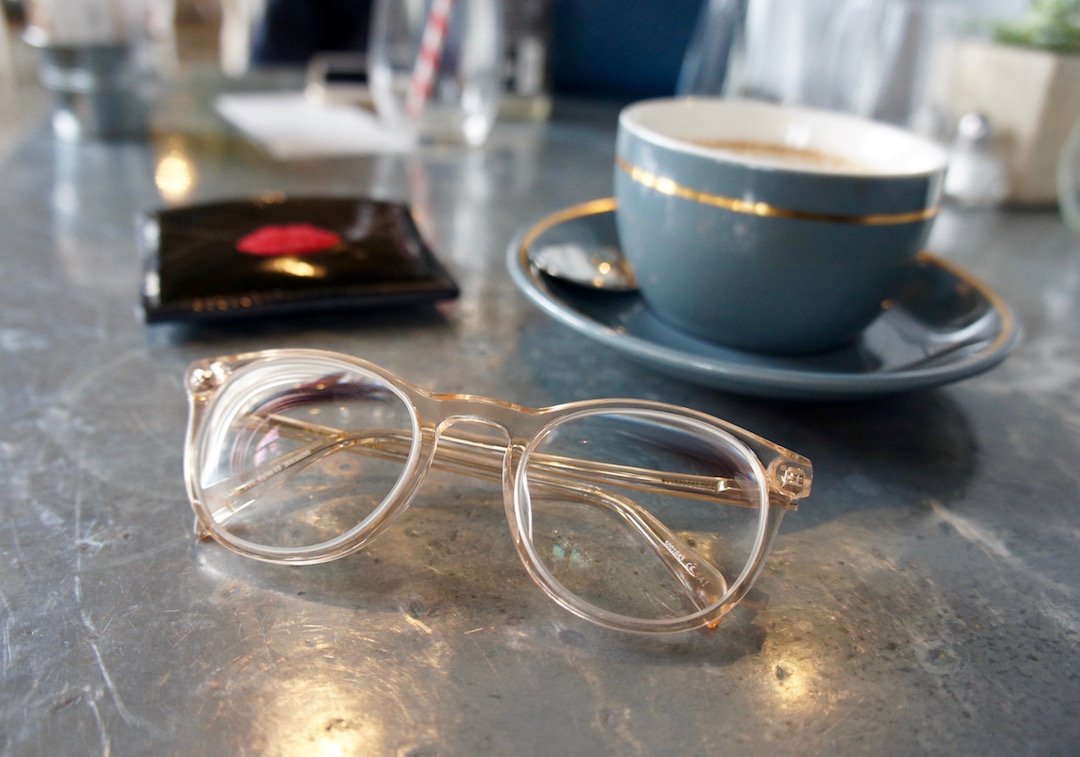 All in all we had a fab time at Aubaine, with such pretty surroundings I could imagine it being a perfect stop off on a classy Hen or birthday party, you can also hire out several of their restaurants which are dotted around London, so if you’d rather some privacy for your shin-dig, that’s an option! In any case, get down to Selfridges, have a nose around, buy yourself something nice and then head up to the second floor for some noms, you’ll be glad you did!