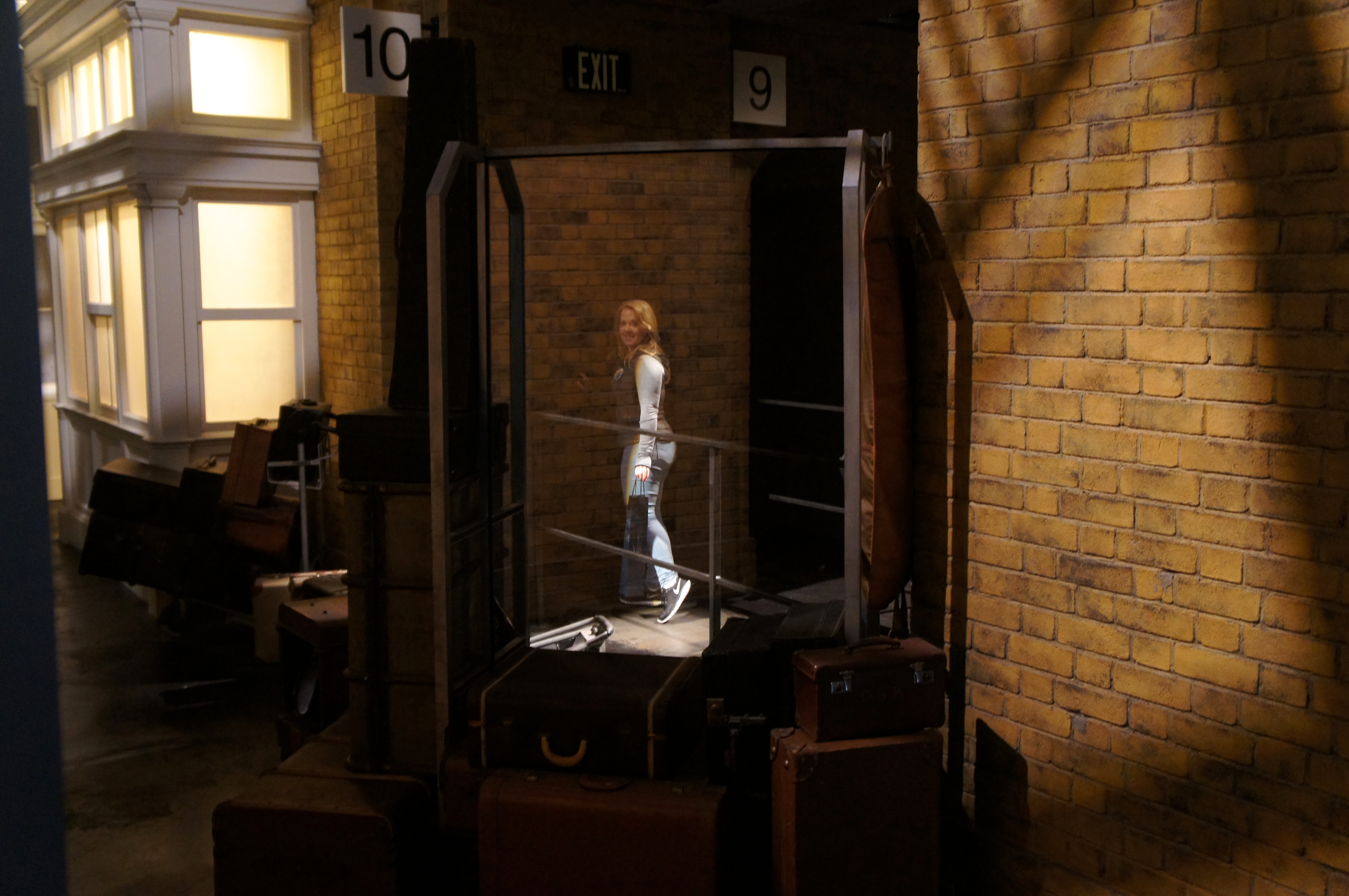 Again, being in Universal at a quiet time paid off massively here, because it meant (without getting in anyone’s way) that we could take photos of us passing between platforms 9 and 10

Throughout the queue there’s lots to look at, a personal favourite was this poster from the films 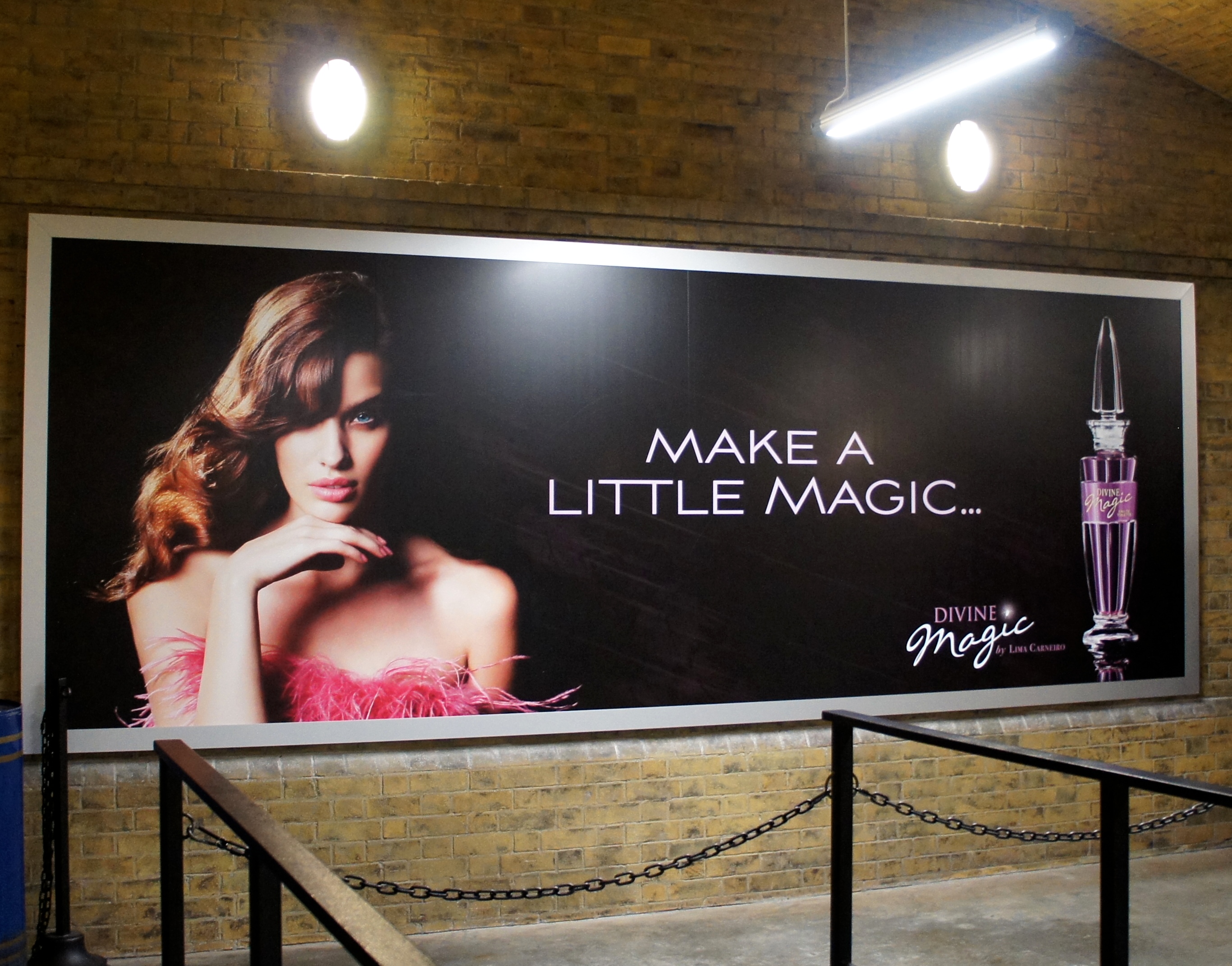 lovely and bright with that – so well described – iconic high ceiling

and Harry and Ron’s trolleys are there too! 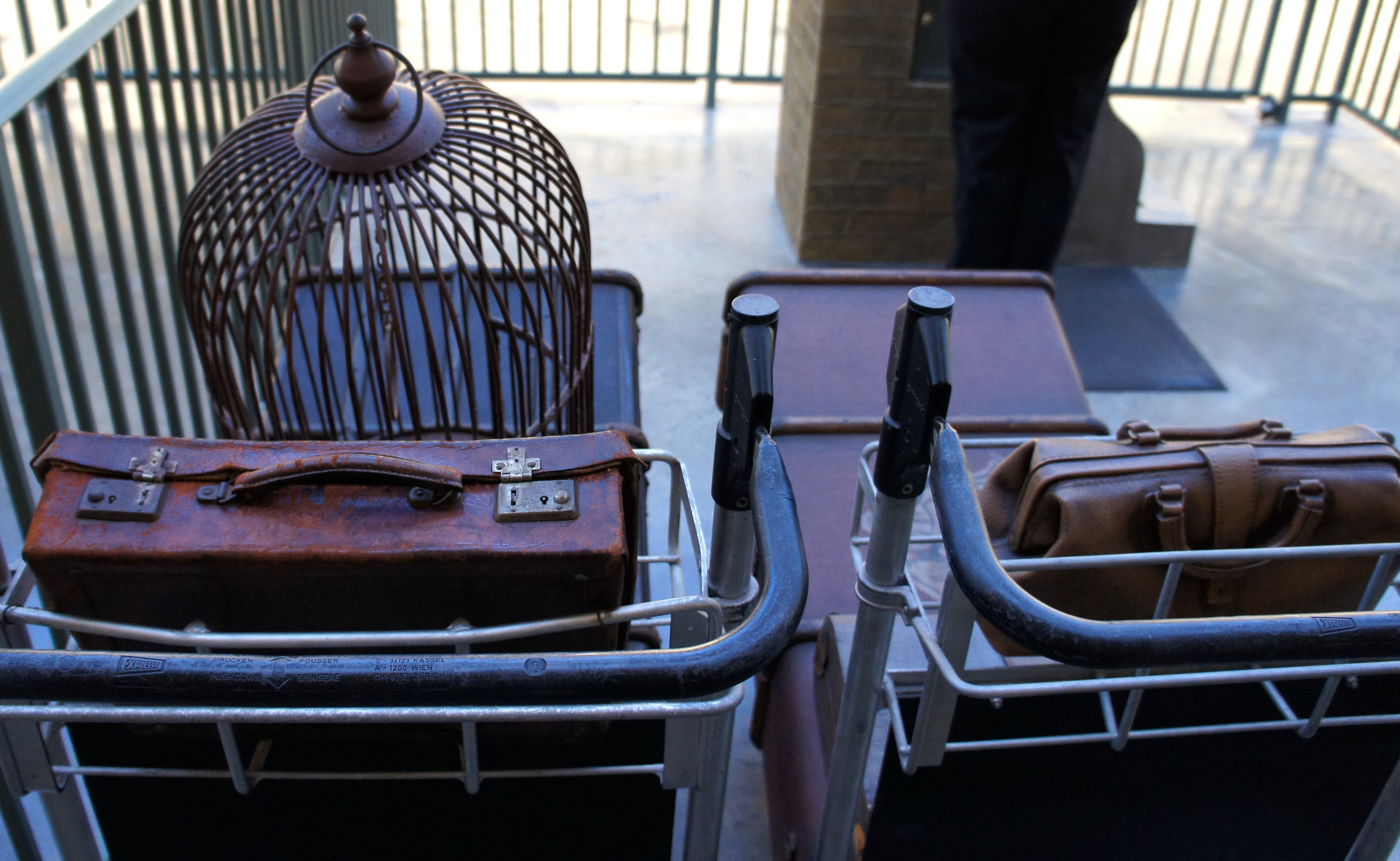 I was beside myself.

The doors opened and with a *calm grace, I made my way onto the train

*loosely based on a true story 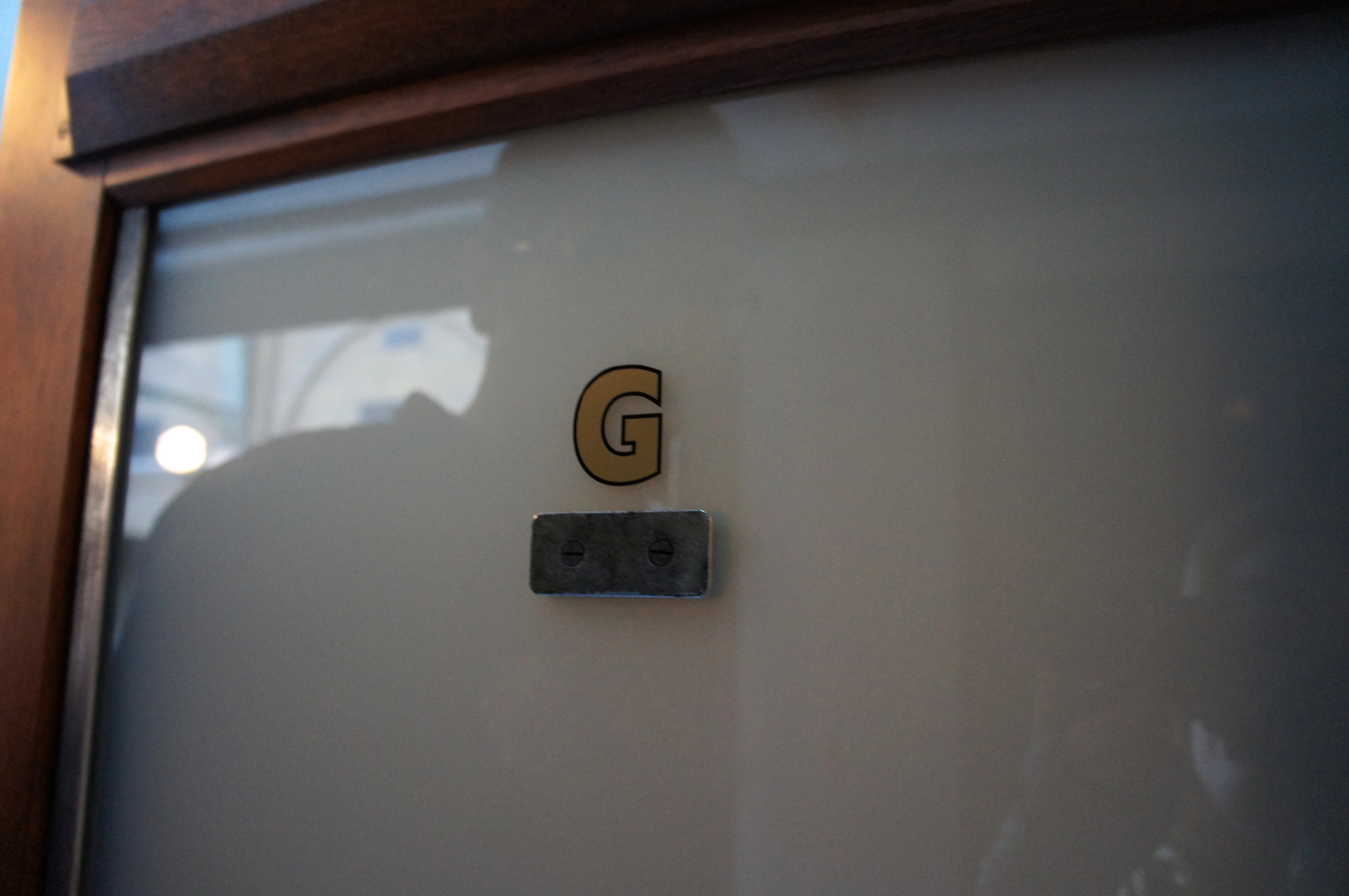 You sit up to six people per carriage (I was mentally assigning characters – Harry, Ron, Hermione, Neville, Ginny, Luna – I mean our group was perfect!)

On one side, is the door you entered through and on the other side is the “window”, which in actual fact is a curved screen to give the idea of 3D. The majority of the action is there, but every so often you get some visitors outside your carriage too

The journey takes no more than 10mins, it’s a lot of fun and one of the best parts is that if you use the train to travel from Hogsmeade back to Diagon Alley, you see and hear a totally different series of events 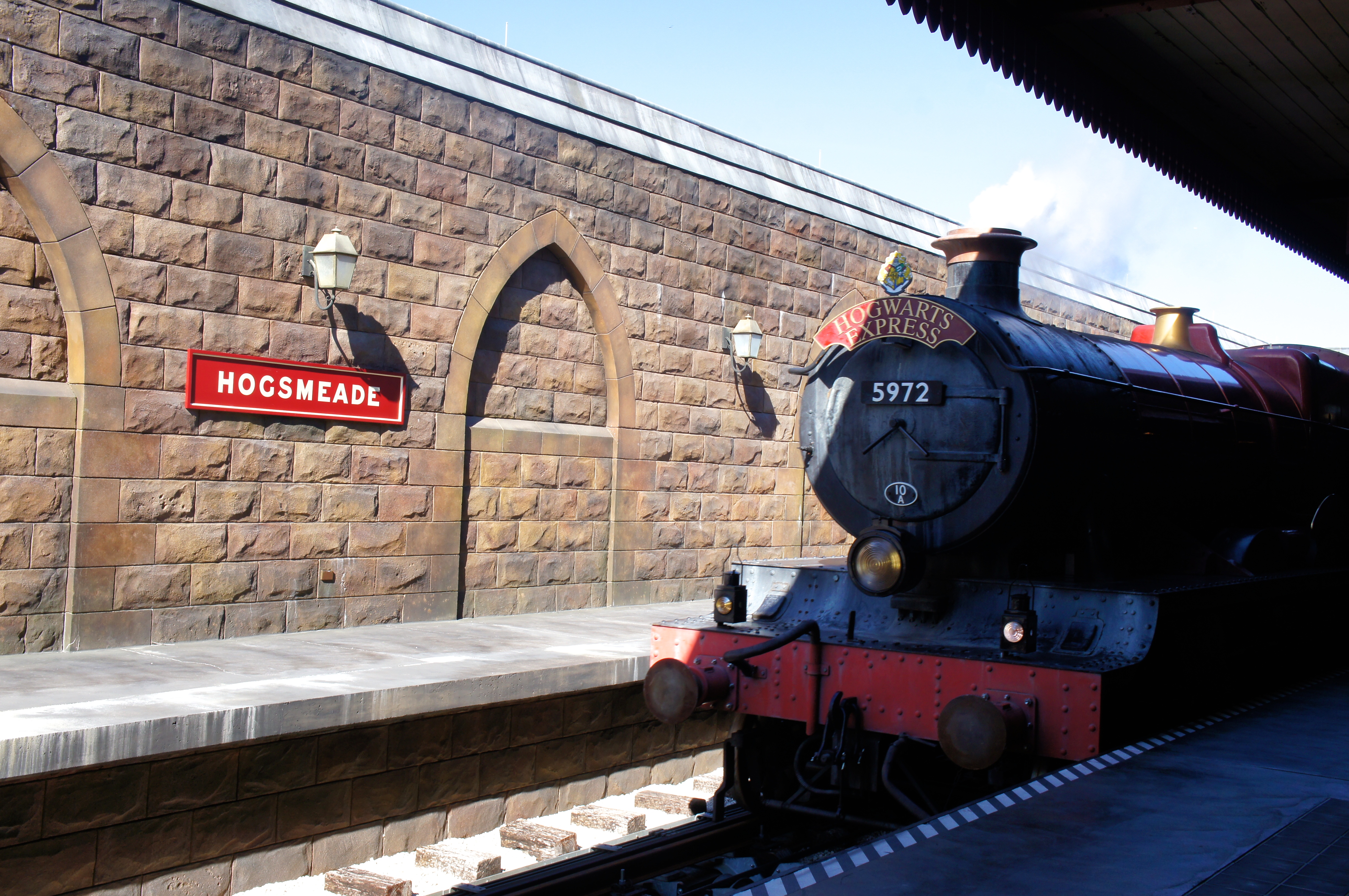 I got to meet the station master, he’s pretty fantastic and simply marvellous for a chat and a giggle, I’m pretty sure we became bestfriends 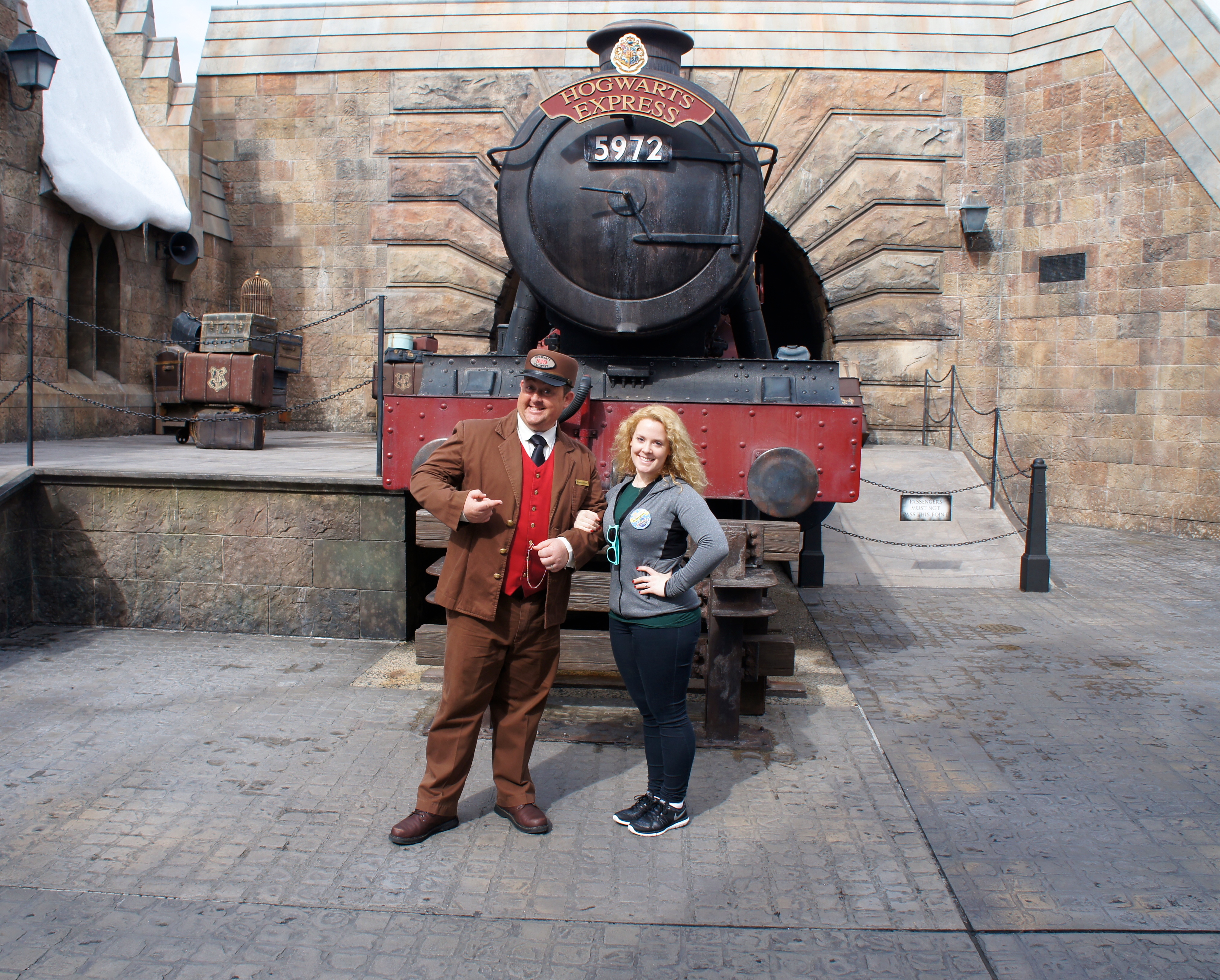 I asked if I could see the station pocket watch, his whole face lit up and he said “who told you about that!?! Let’s have a look”

Bit hard to see in this photo, but engraved on the front is “Hogwarts Express” and underneath it says “5972” 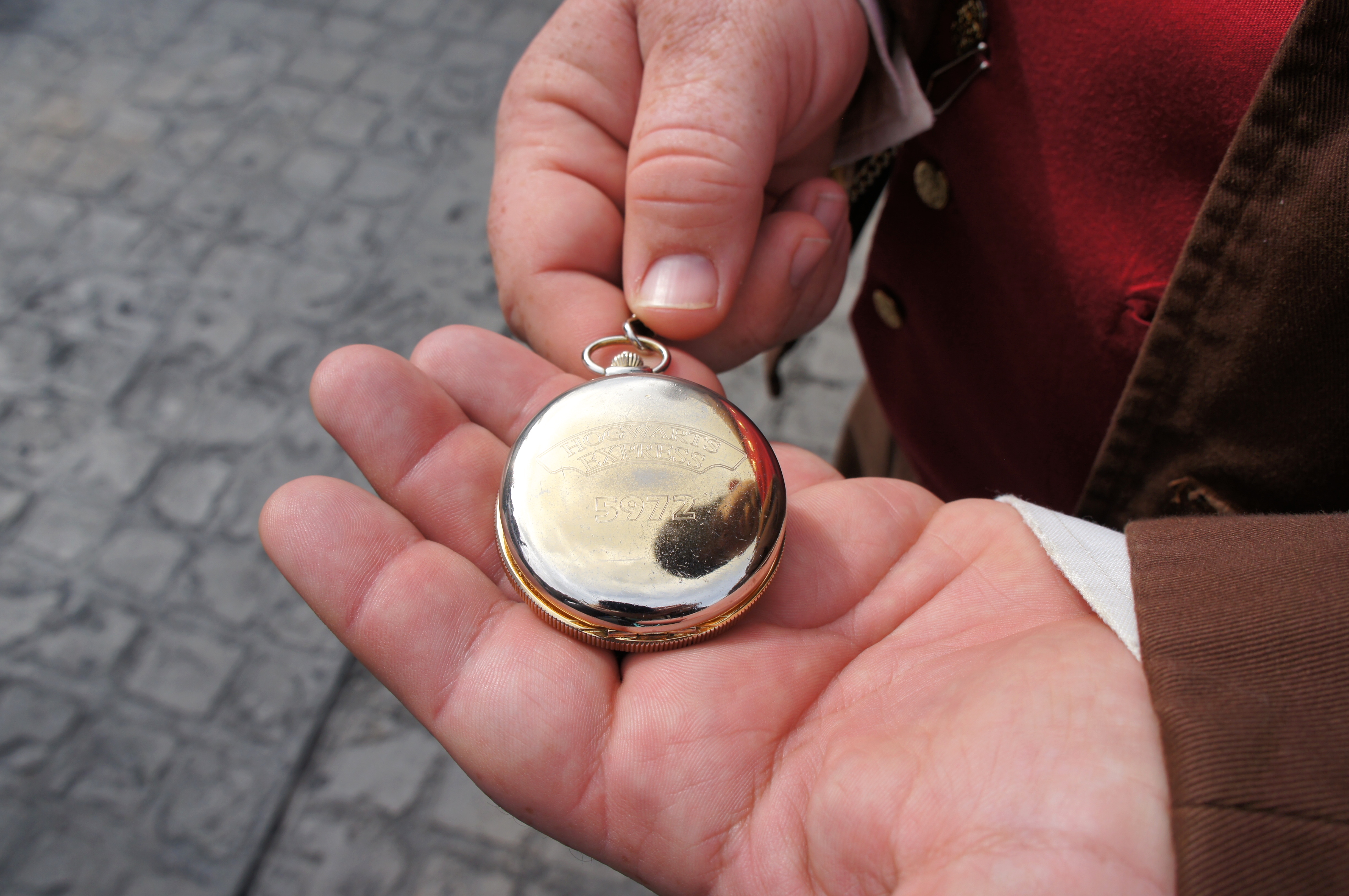 I just LOVED the inside, had they been available, I totally would’ve bought one. Although, I think the fact that they weren’t on sale, made getting to see it even more special 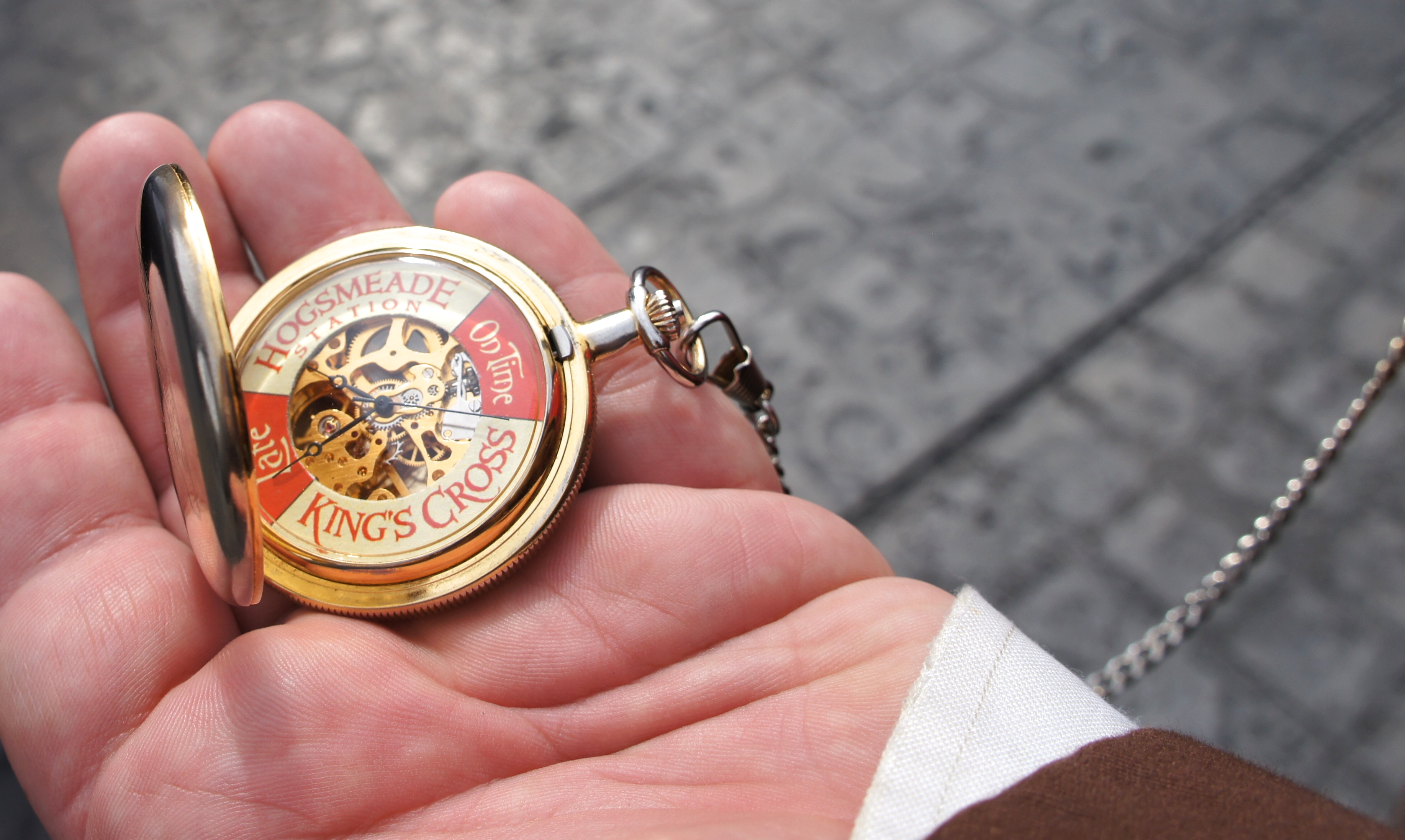 I was about to leave it there when my new friend said “wait, you’ve got to take the back too!” and there engraved in all it’s glory was the Hogwarts crest and motto “Draco Dormiens Nunquam Titillandus”

It means, “Never tickle a sleeping Dragon”, which I think is a very good motto indeed! 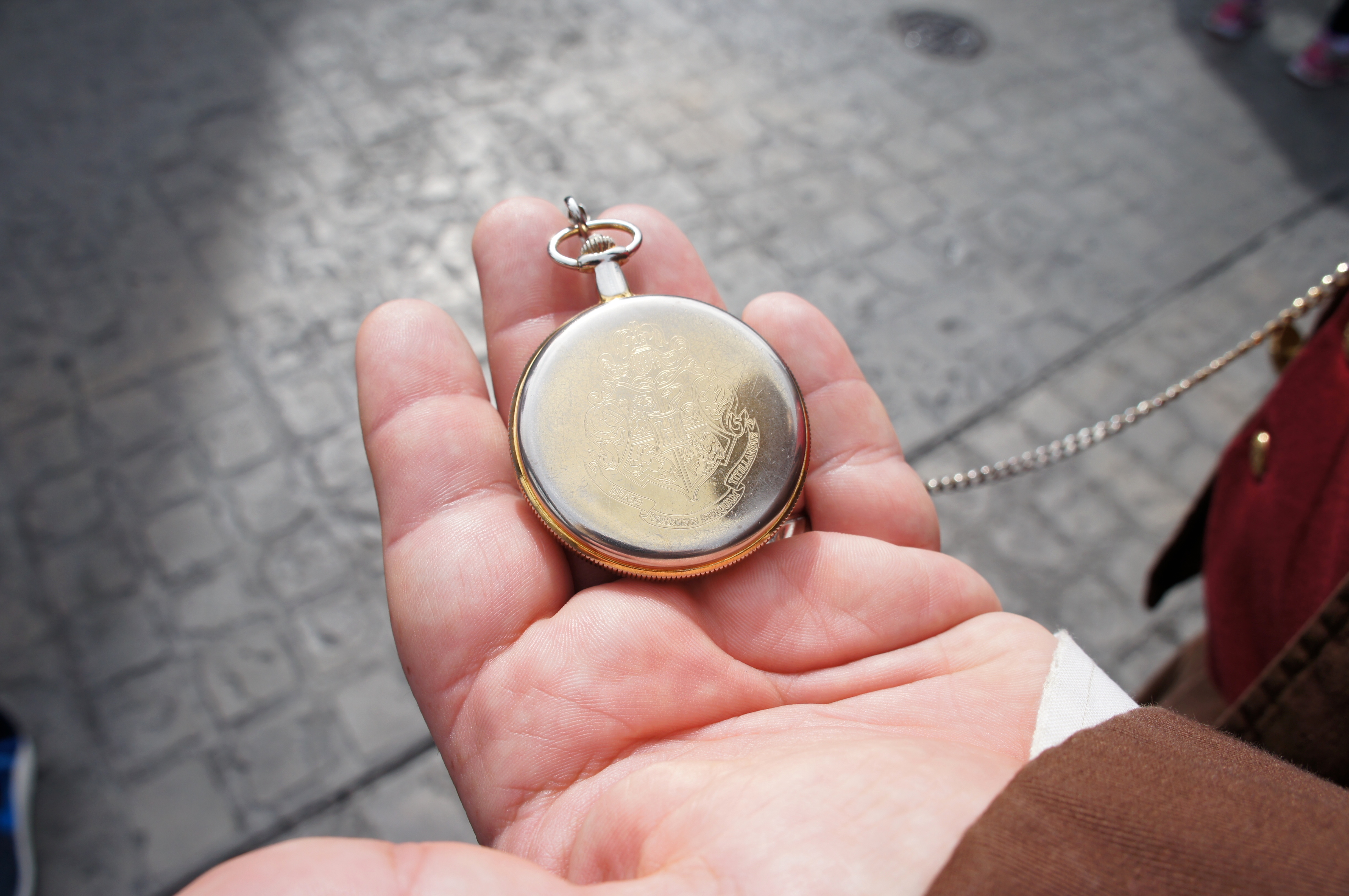 With a wave, we thanked the station master and headed towards Hogsmeades official entrance – yay! 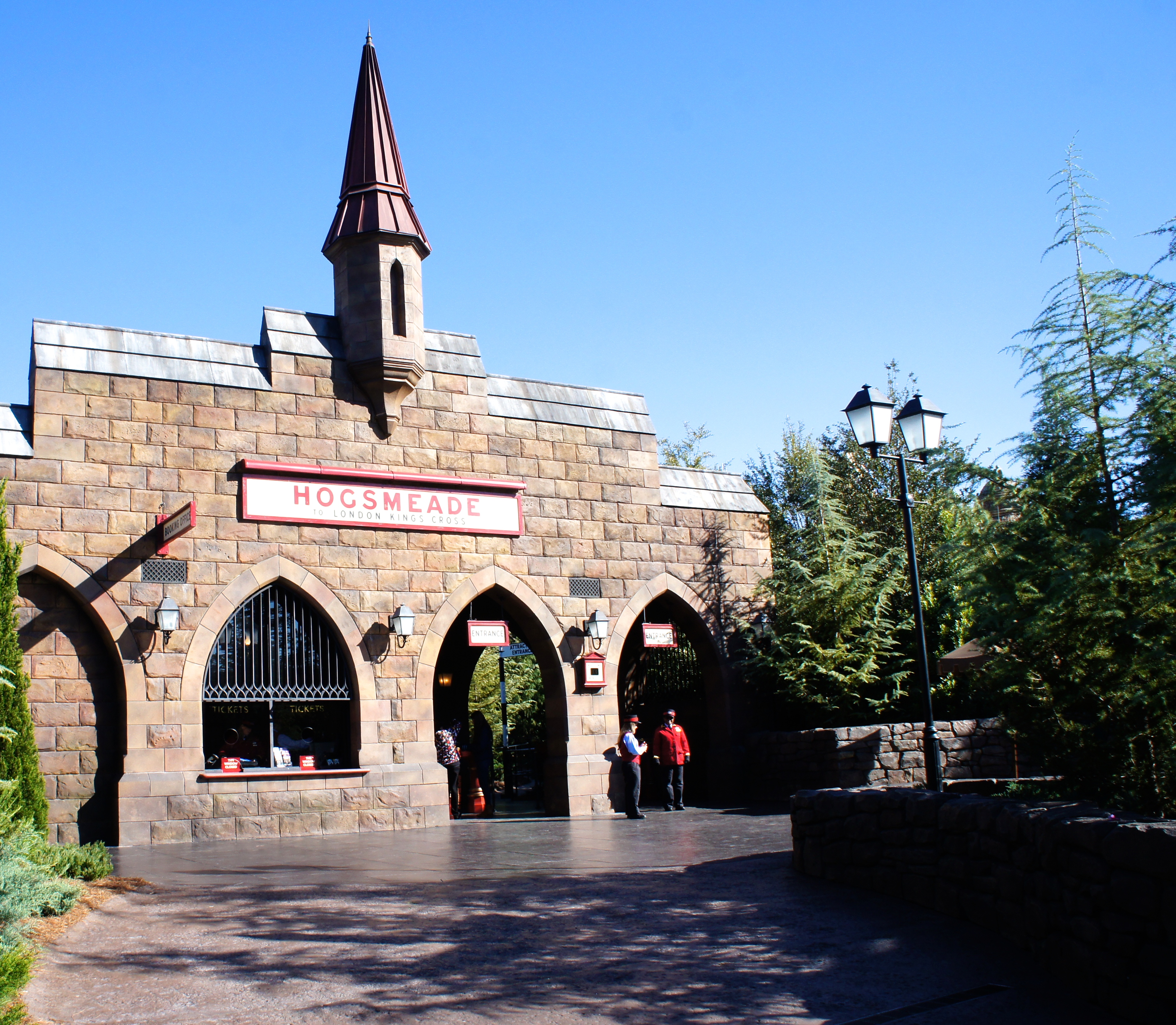 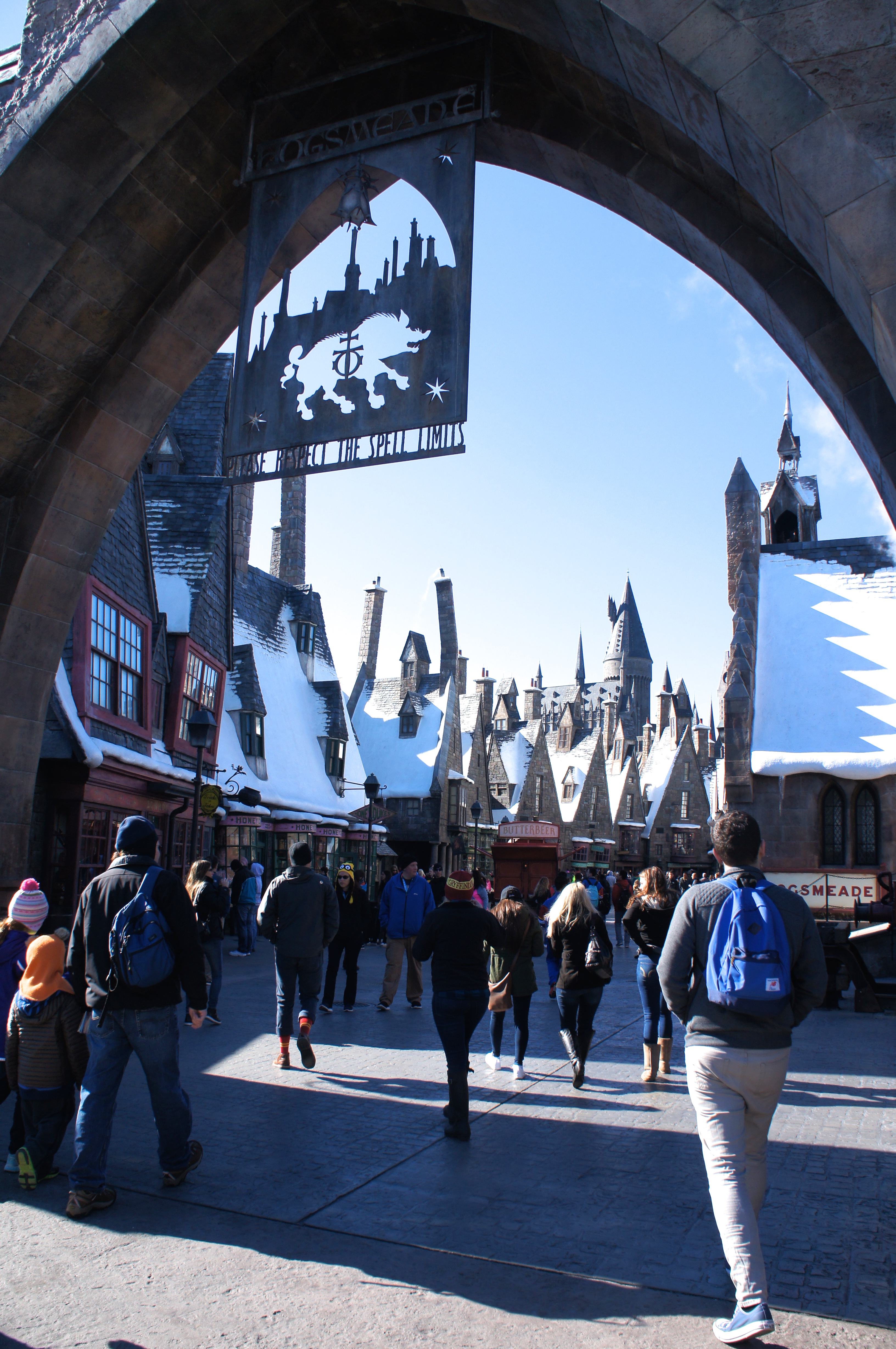 With roof tops all squiggly and covered in snow, it was picture perfect 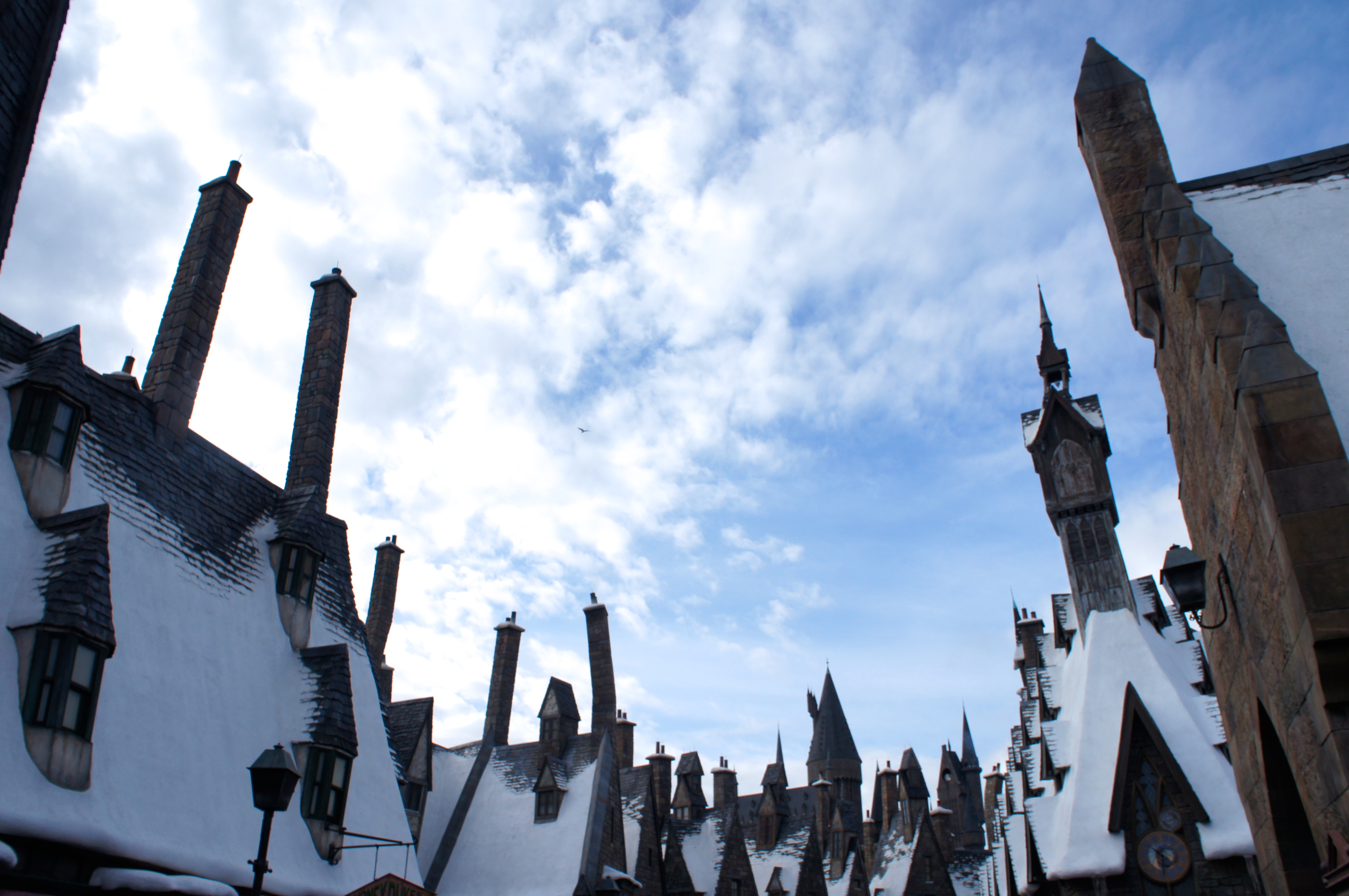 I did a little bit of wand work only for this fella to appear with his tongue sticking out at me – the cheek! Although I did love his wicked giggle 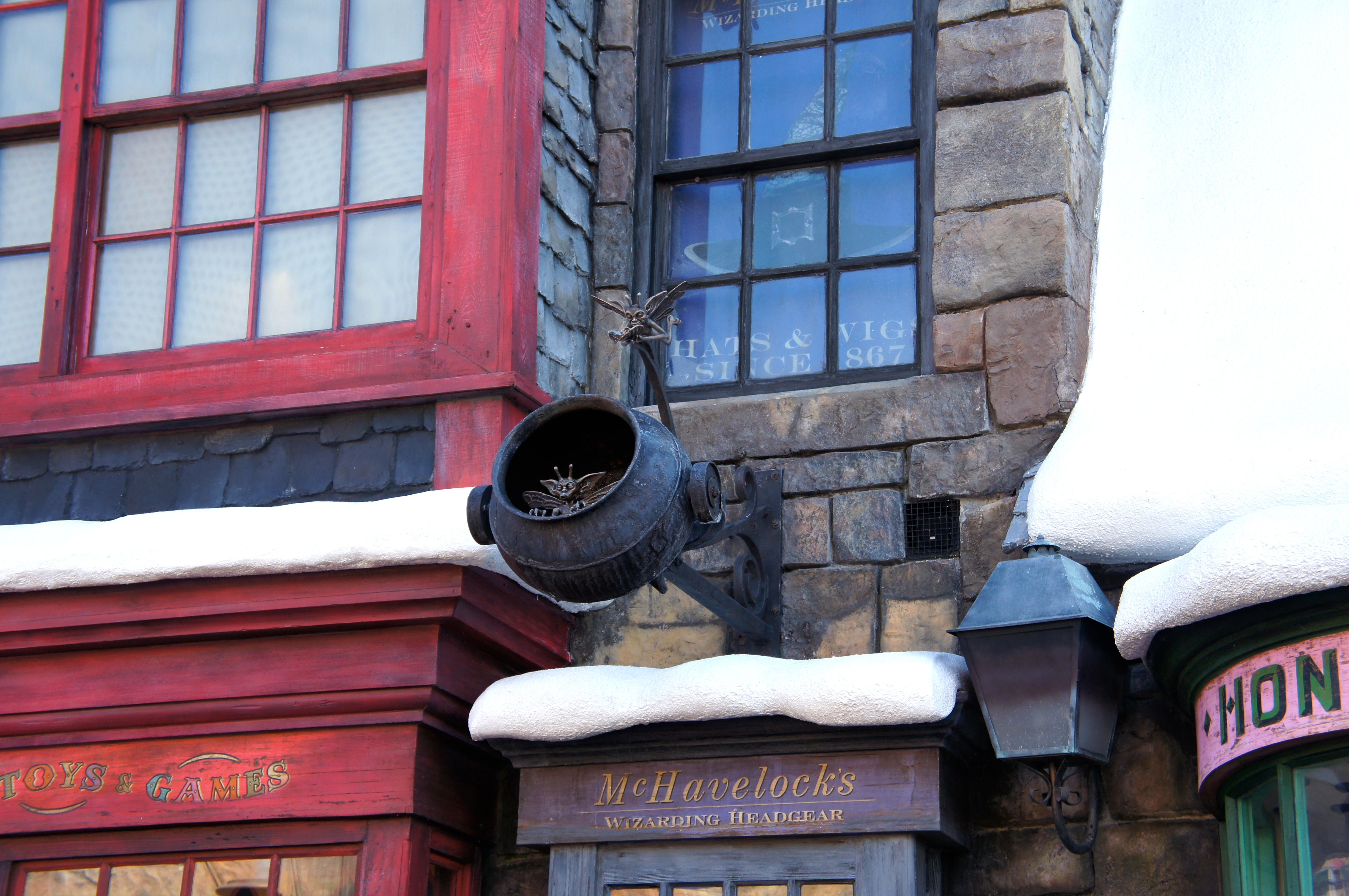 The Three Broomsticks, just like in the books, became our safe haven of warmth, it was bitterly cold by now and made Hogsmeade feel all the more real because of it! 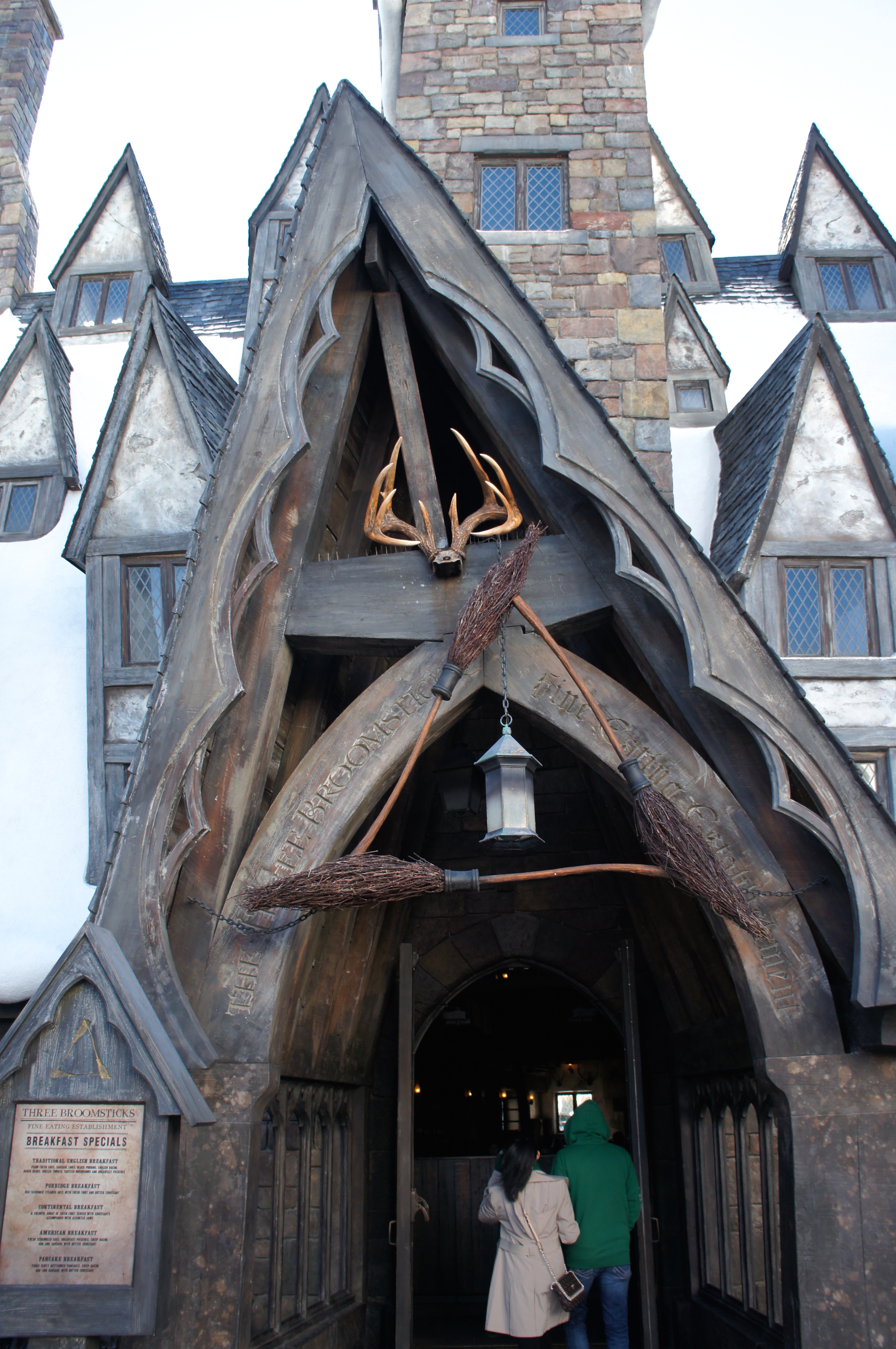 The first ride we went on in Hogsmeade was the one in the castle, called “Harry Potter and the Forbidden Journey”. We loved winding our way through all the different rooms while we queued. I think there was a little too much hype about the ride itself, because while we enjoyed it and it was good fun, I didn’t like how reliant it was on you watching a screen so that was a bit of a shame.

There are three other rides in Hogsmeade, the “Dragon Challenge” (there are two choices here so I’m counting them as two) and “Flight of the Hippogriff”, this one is largely for the littles, but you get to see Hagrids house and Buckbeak, so I enjoyed that! I had a favourite dragon, the Chinese Fireball – the Hungarian Horntail was good too, but I just had more fun on the Fireball

Himself informs me I’m wrong and that they were pretty much the exact same….(they weren’t!) 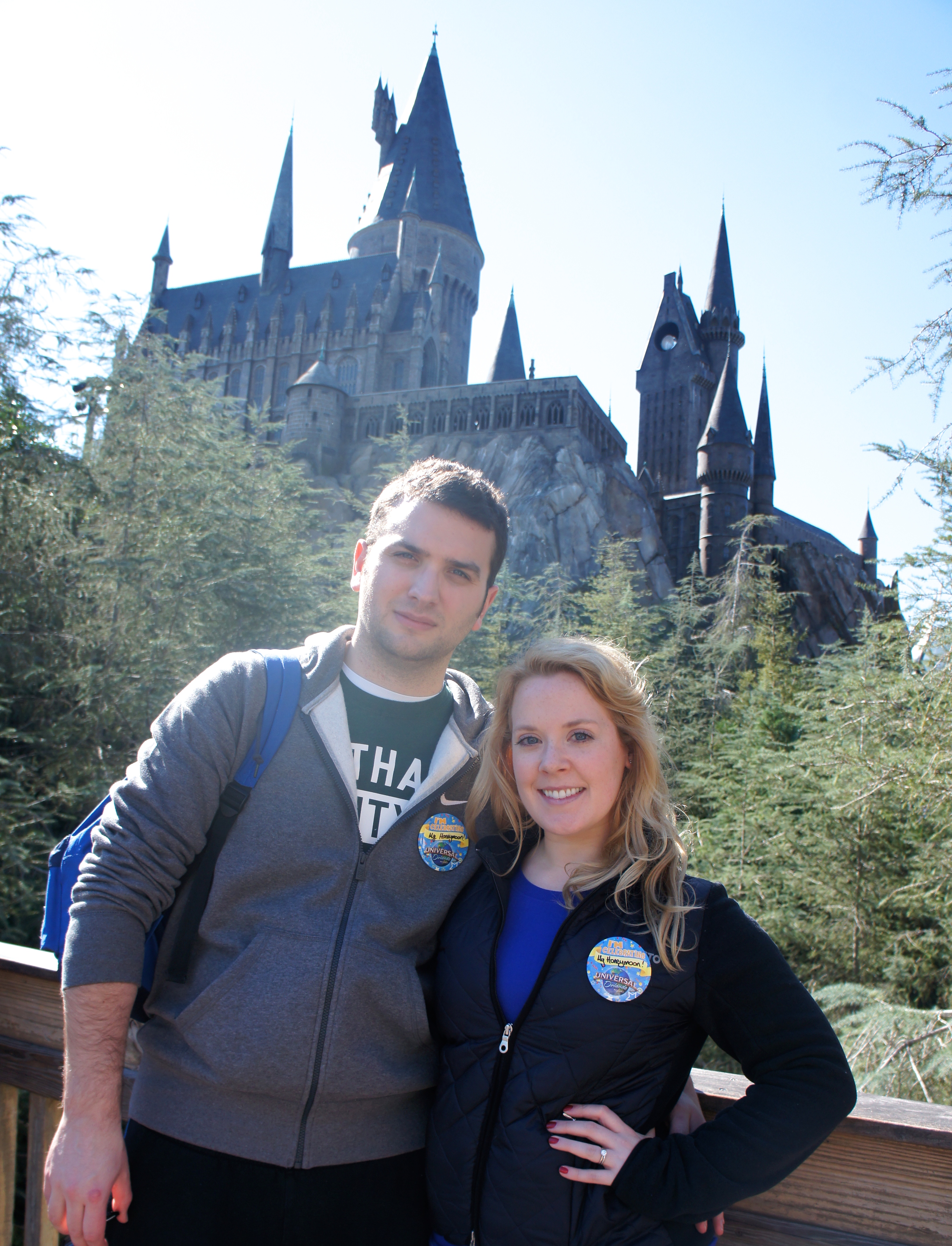 We meandered through the town, taking in all that we could, but once I saw this sign, I made a beeline for the post office! 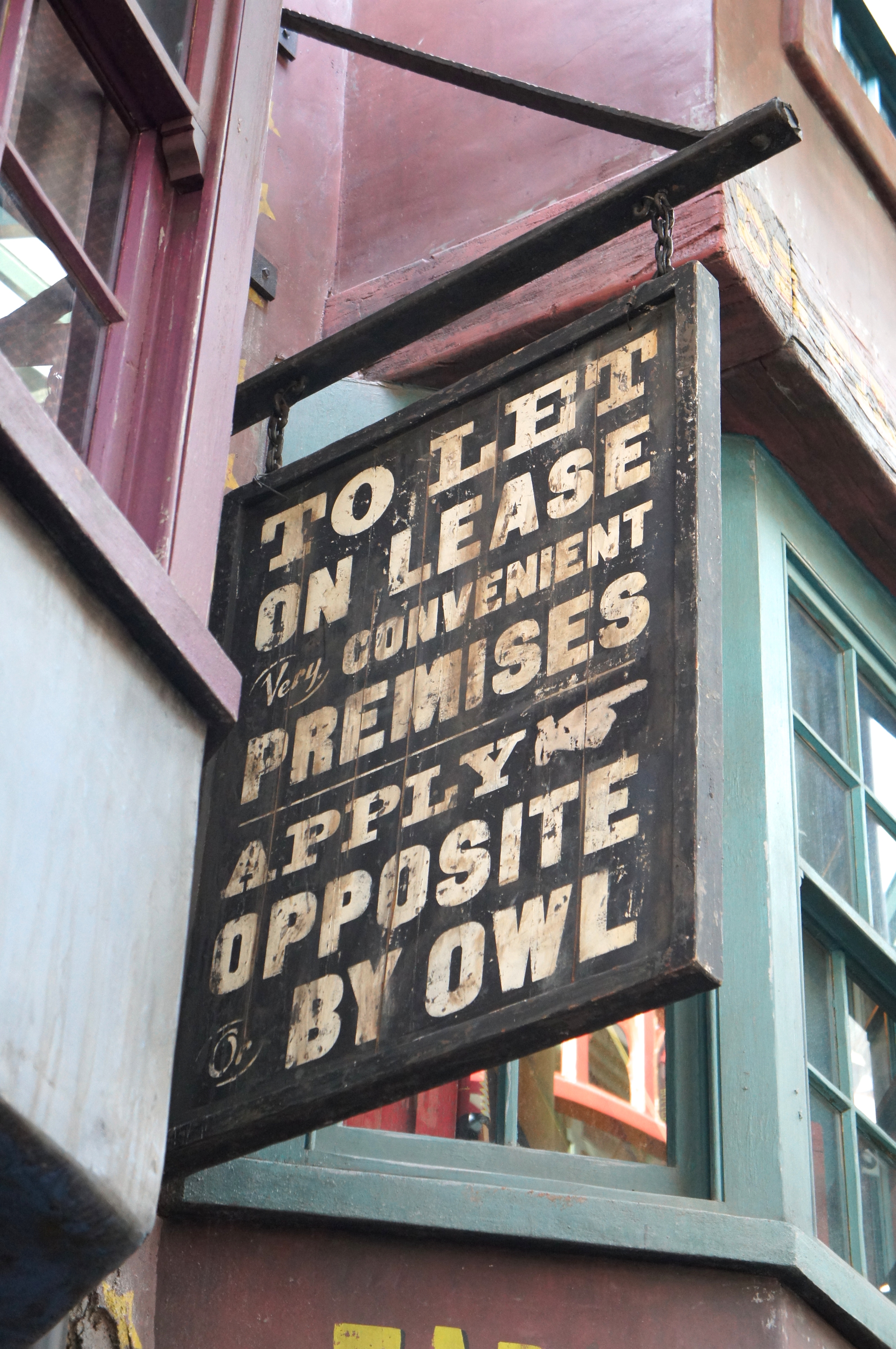 Now in actual fact it’s another shop, but they have it decorated brilliantly, I really loved seeing all the packages and owls awaiting selection 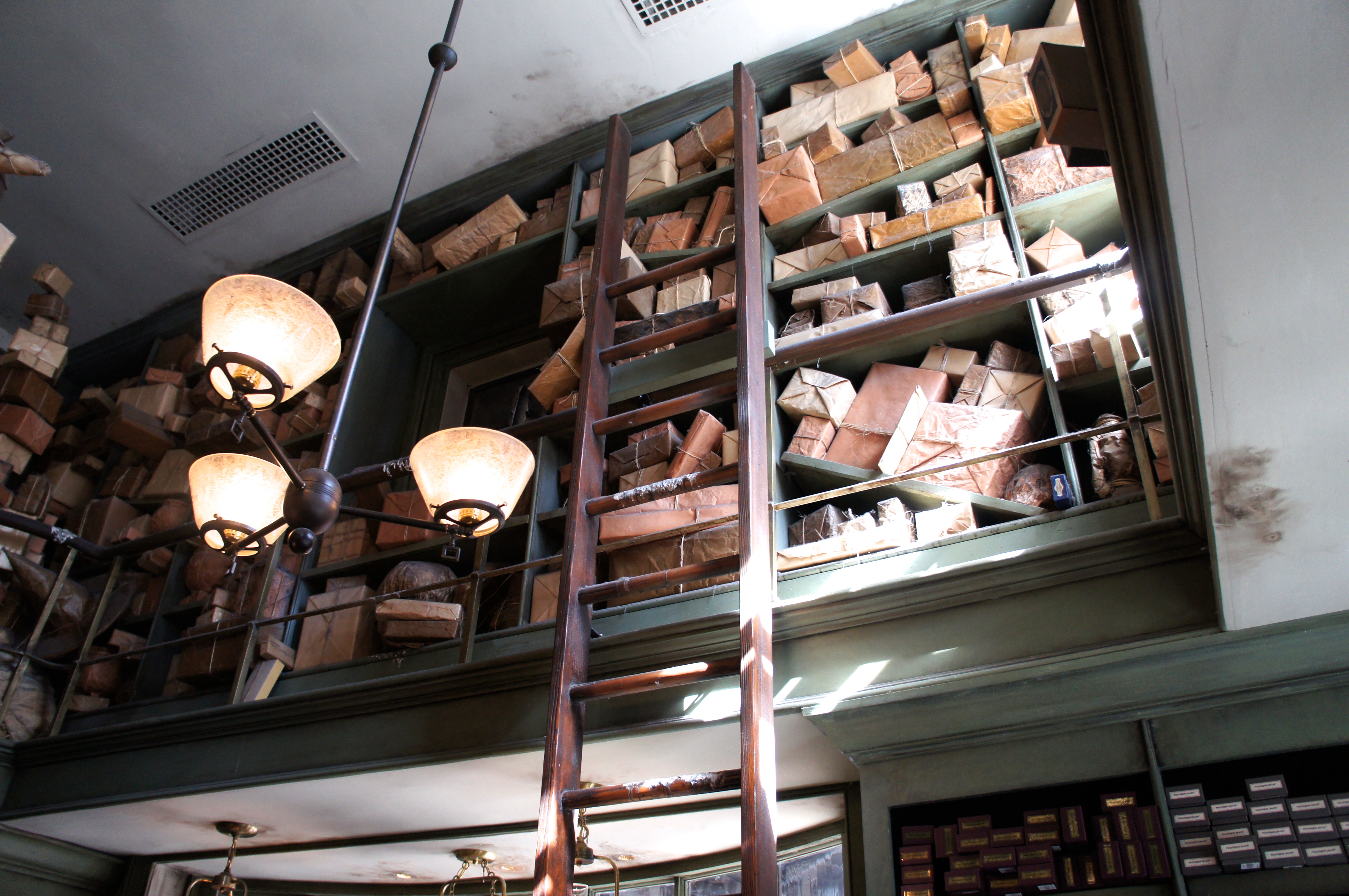 We had a good root around the post office, coming away with a Howler for Mom, who has loved the books almost as long as I have. Unfortunately, when we went to record our message a week or so later, we discovered it was faulty, I was so disappointed, especially seeing as it wasn’t cheap! (And before anyone asks, no we did not remove the tab before trying to record our message, I was just the poor soul who happened to pick up a faulty one!)

My advice, if you buy something like that when you visit, make sure it works before you move on, we had already left Universal by the time we realised. 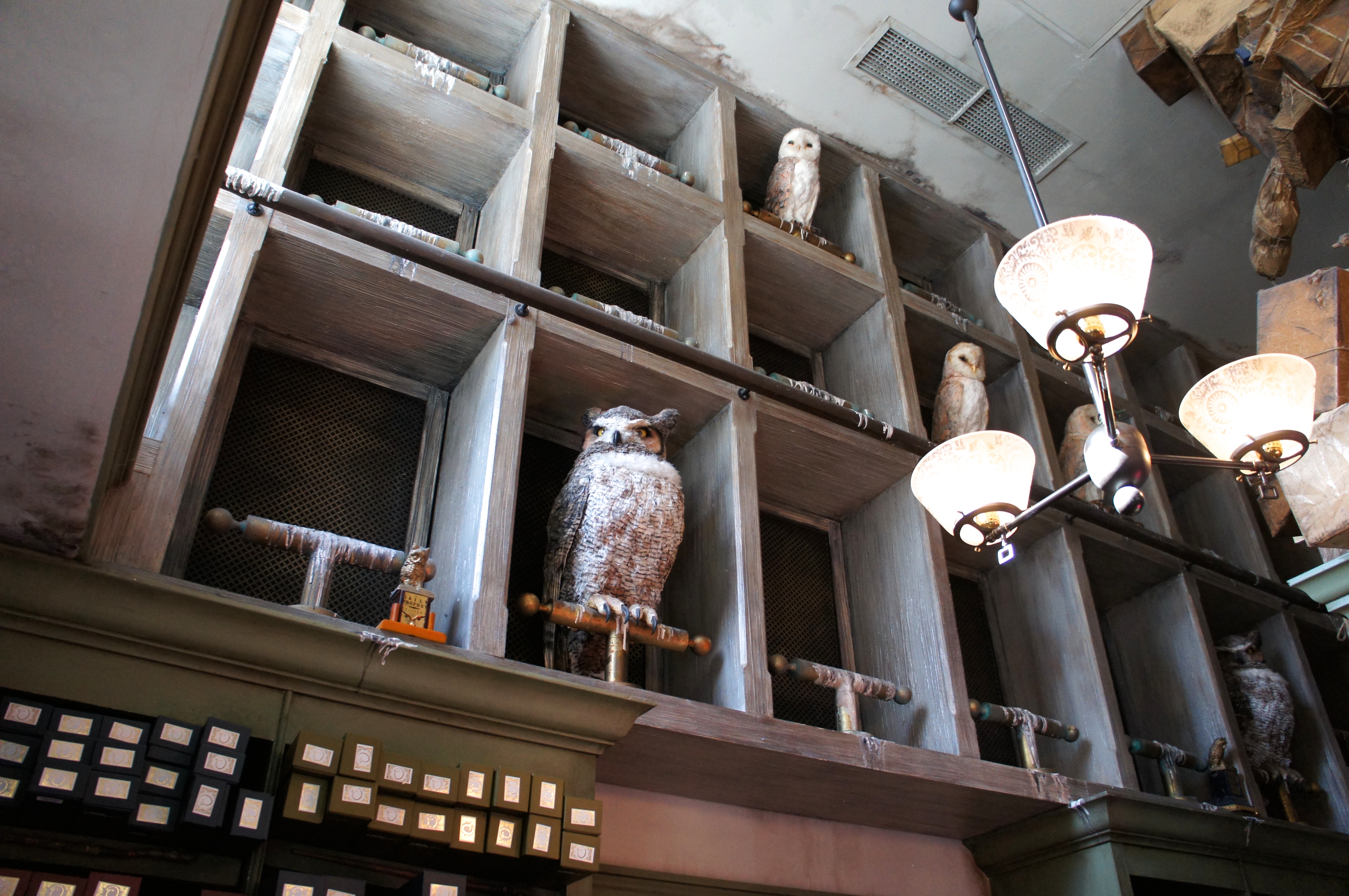 My favourite shop to visit in Hogmeade, hands down, was Honeydukes! 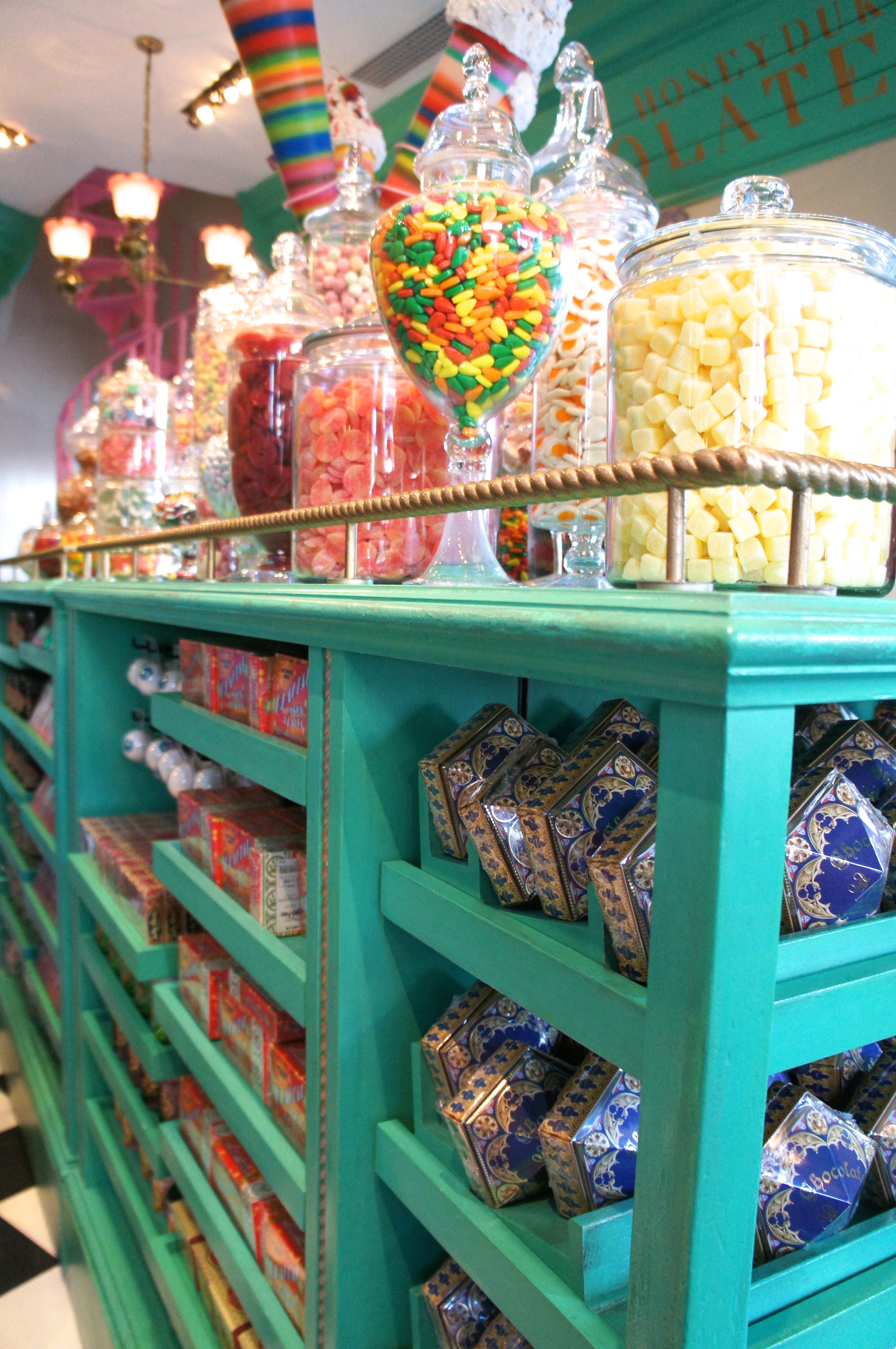 It is completely joyous to look at. It couldn’t be more of a juxtaposition to everywhere else in Hogsmeade if it tried!

There were rows and rows of sweets, some from the books and some new and all looking positively delectable!

But the day was made, when I found these! 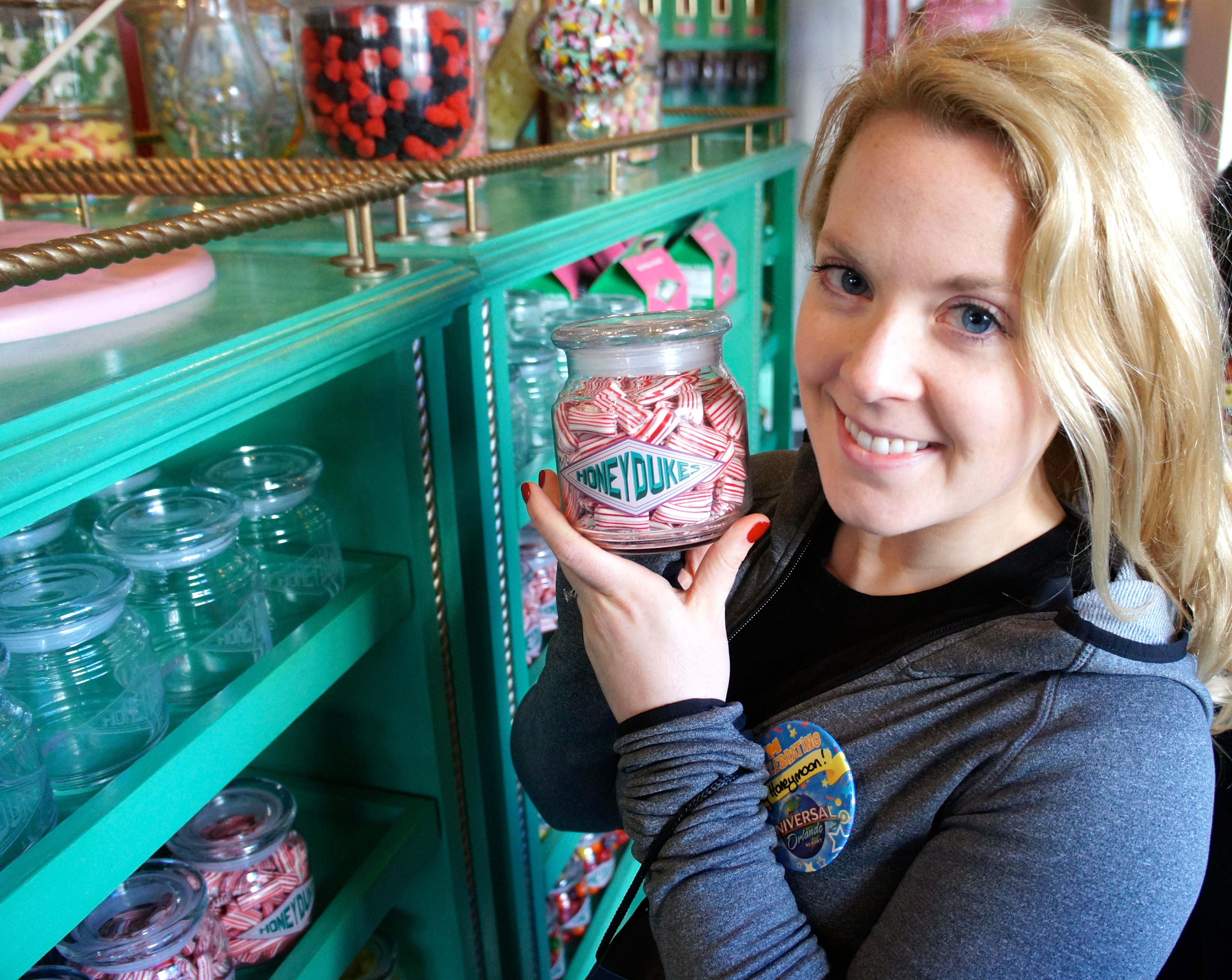 Peppermint sticks with a surprise smooth lick of chocolate inside – they are the tastiest things in the world and I can tell you, that jar is most definitely, not that full anymore!

Everyone seems to love them…makes me wish we’d bought a second jar! 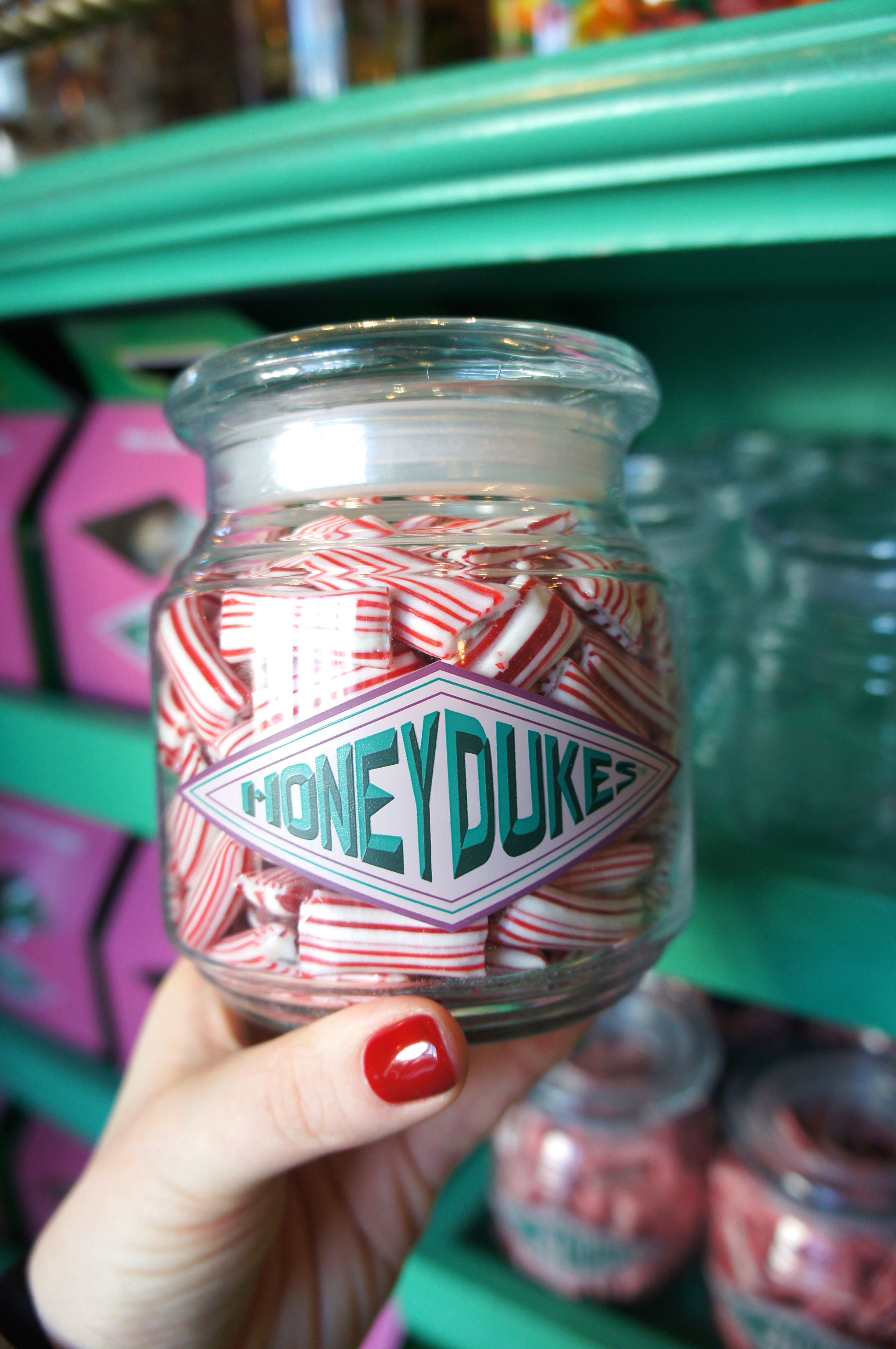 The chocolate frogs are out in full force, like their very own little army! We bought one of these because, well in all fairness, talk about being synonymous with the franchise!

Fair warning though, it is literally a solid block and is a little inferior to other items on sale because it’s not actually the same frog you see in the films, the detailing on the mould just isn’t as good. The chocolate itself is ok, but not great, although I honestly think that has more to do with American vs European chocolate than anything else 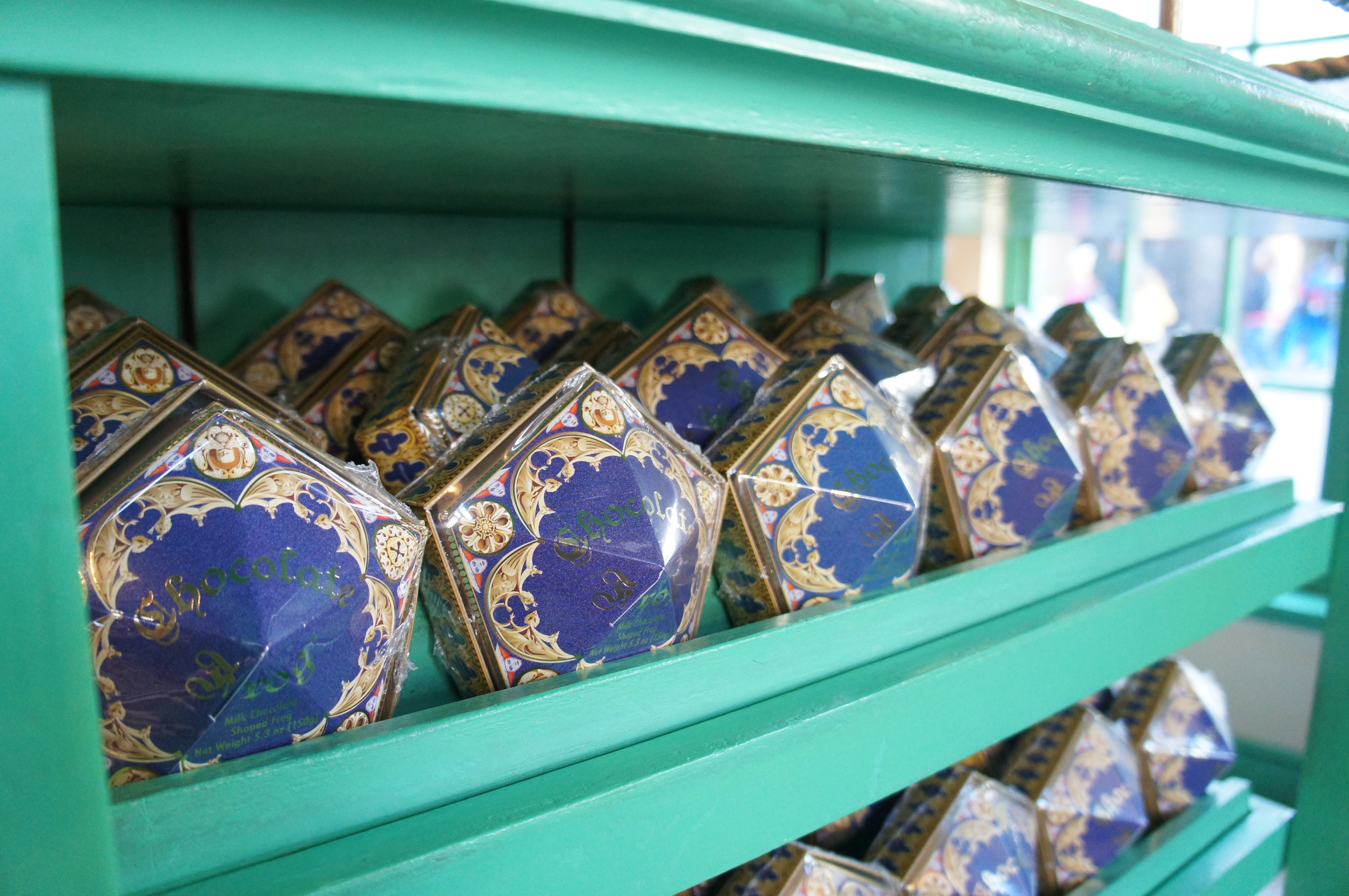 I could have been VERY dangerous if left to my own devices – I wanted to buy and try it all and the beautiful packaging really didn’t help matters either! 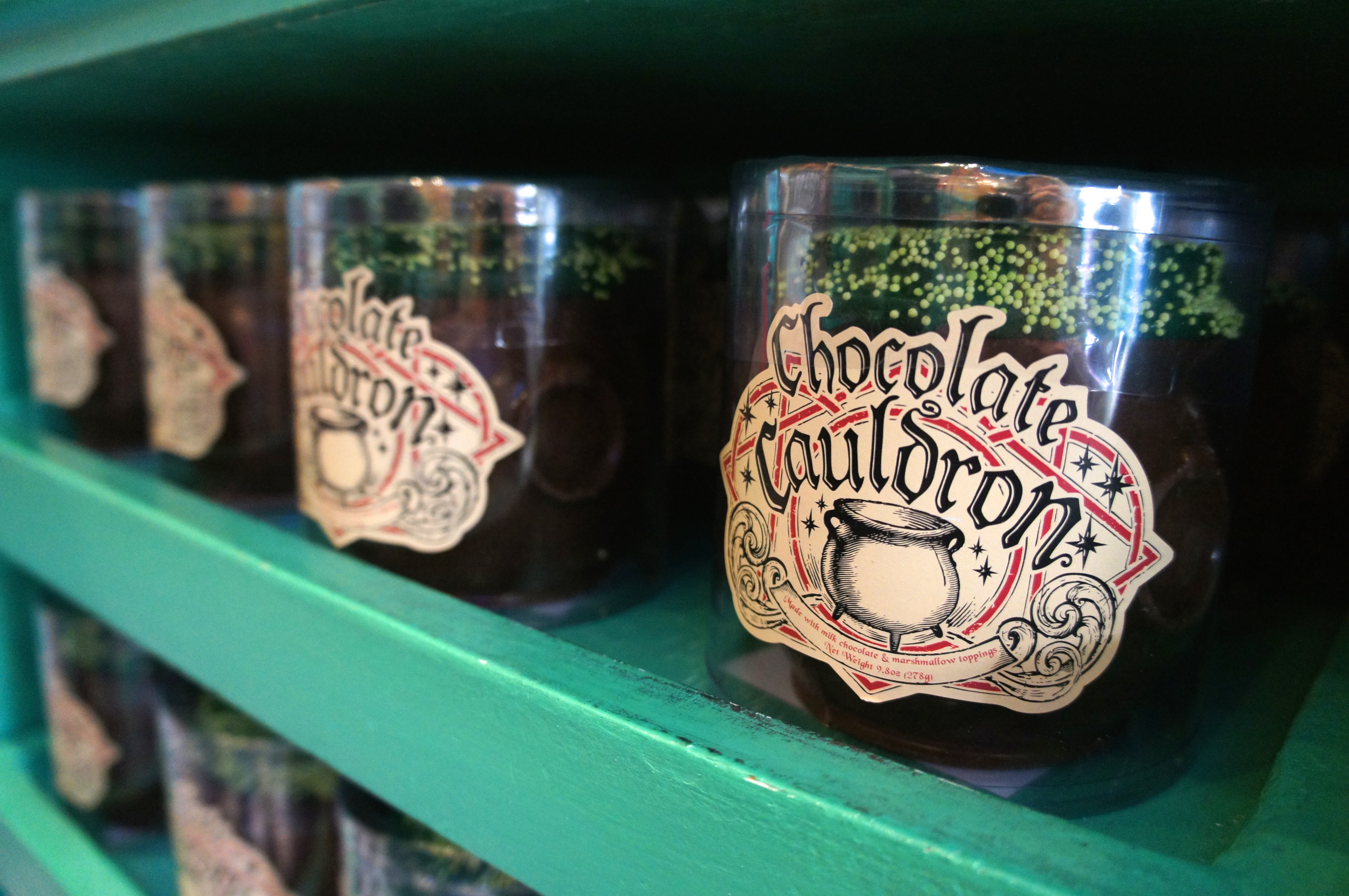 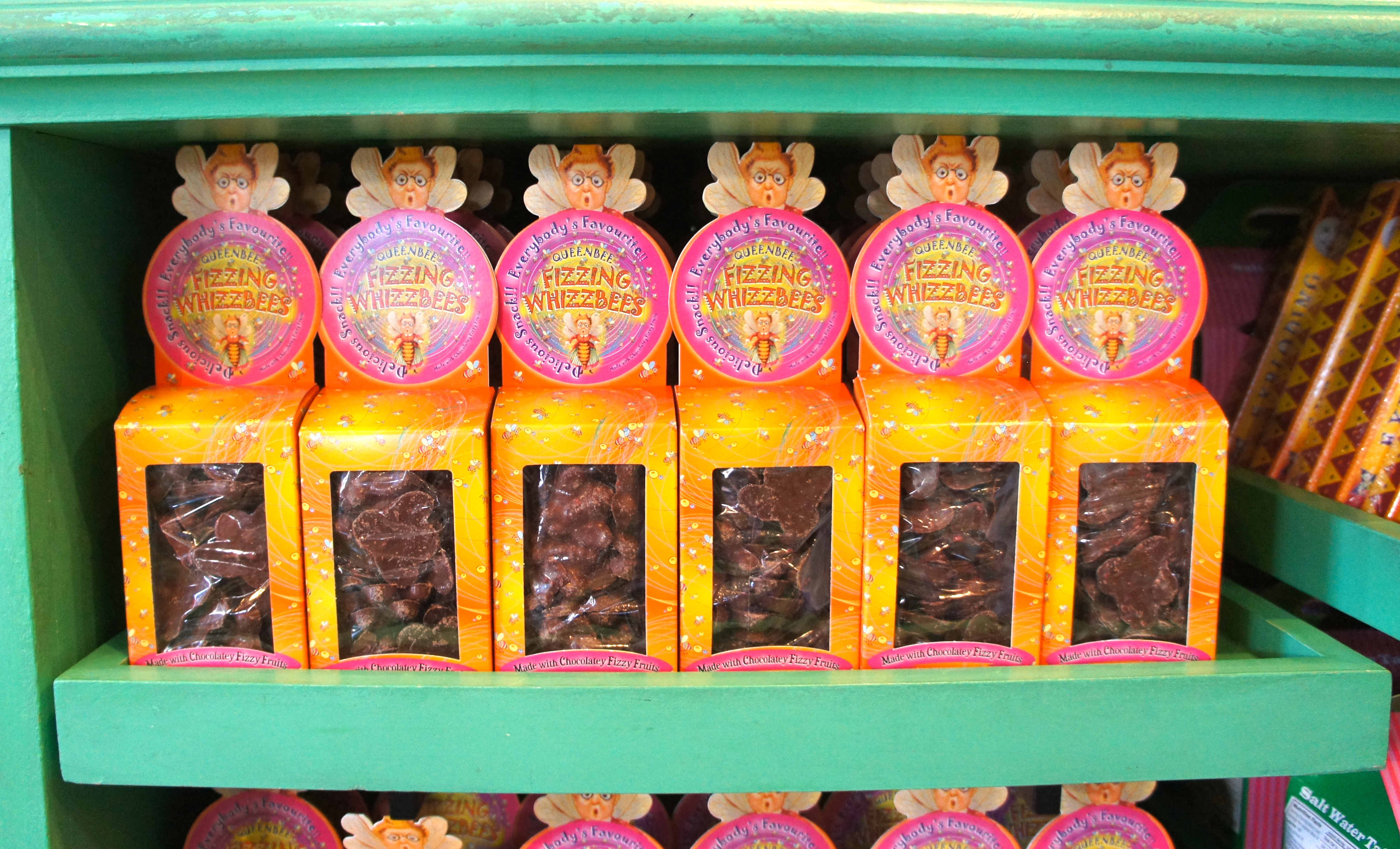 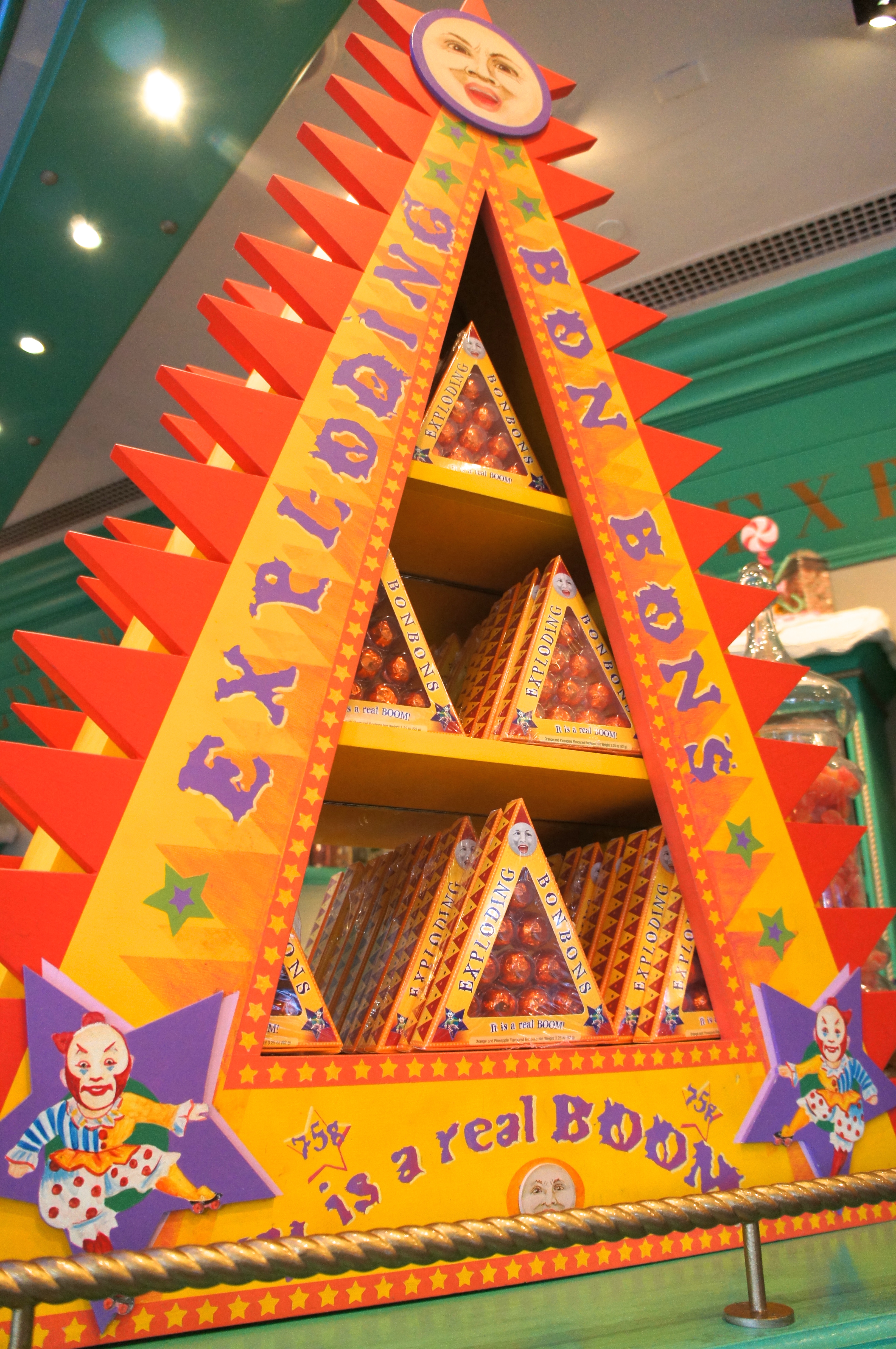 We didn’t get any of the Bertie Botts Every Flavour Beans, I had a bad experience with one of them when we tried them in Leavesden Studios and thought it best to call it quits!

I didn’t buy it myself (because I wanted to try new things), but if the Honeydukes milk chocolate bar, is even half as good as the one we bought at Leavesden, I urge you all to buy it for yourself – so, so good! 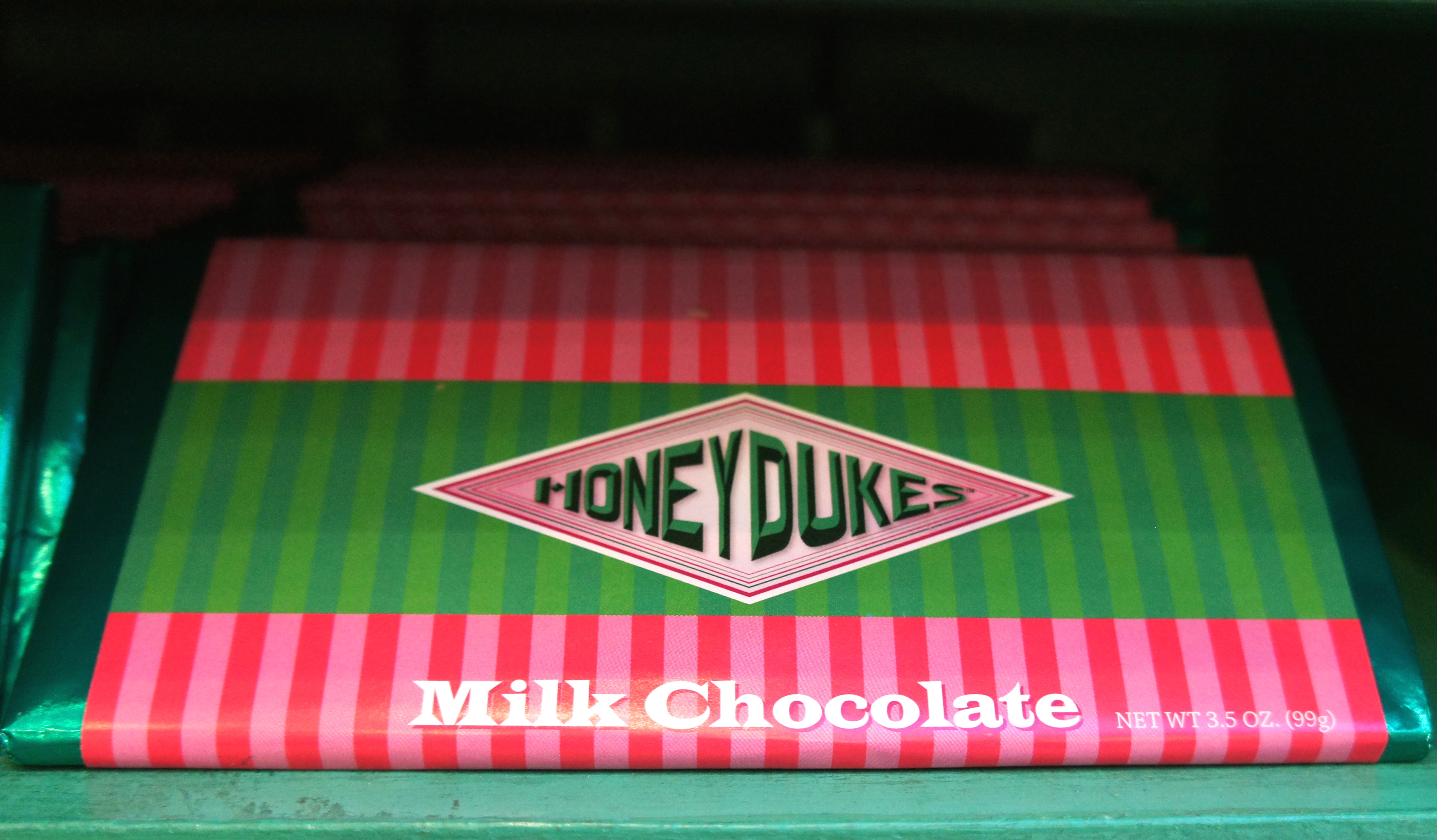 Overall, my heart was won by the pretty pink staircase that led to nowhere, with endless imaginative possibilities springing to mind, I think my surroundings were rubbing off on me! 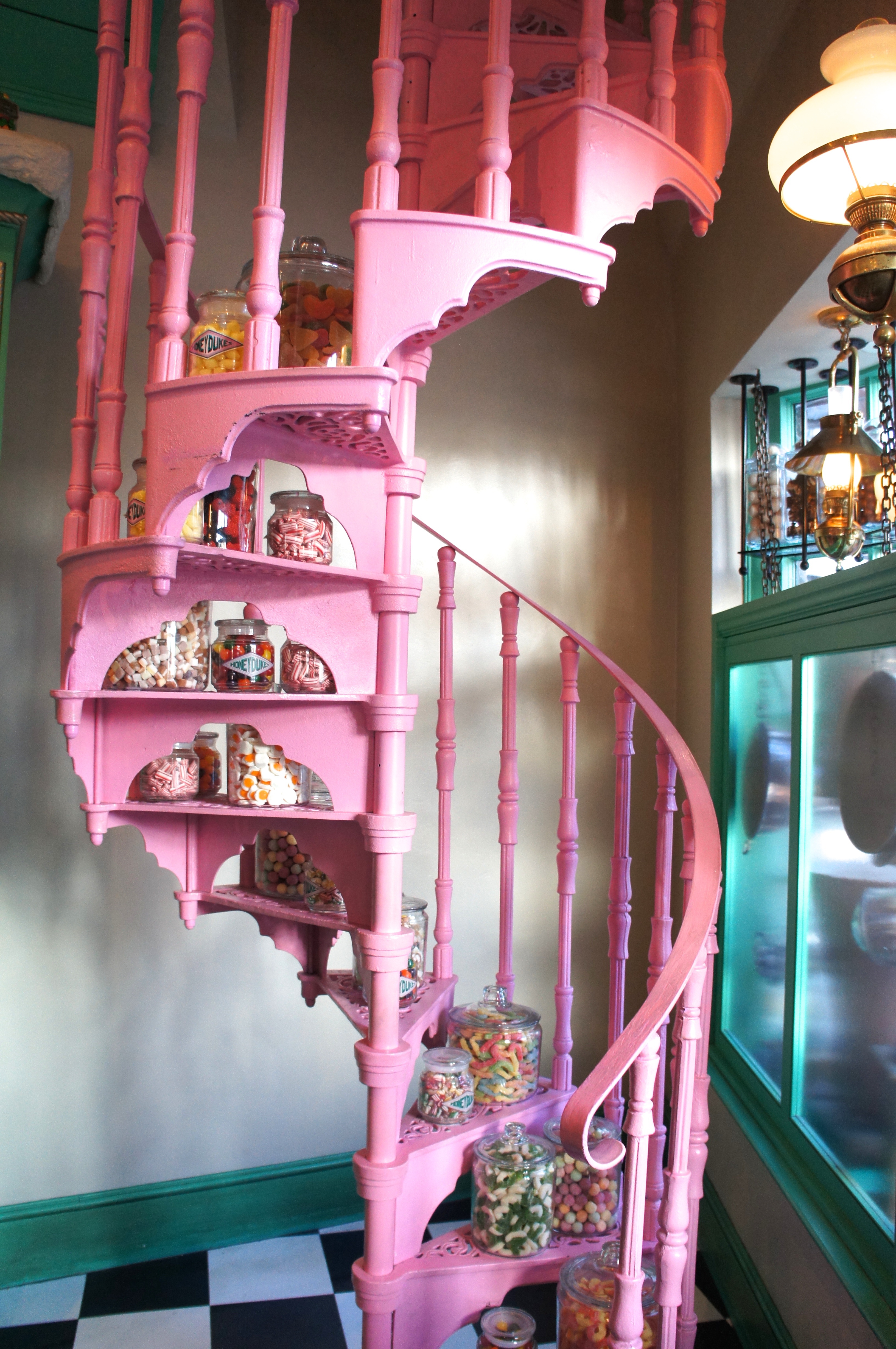 To be honest with you, as much fun as we had, I was far more excited to get back to Diagon Alley the next day than I was to return to Hogsmeade. I know Diagon Alley is newer, but I think they’ve completely out classed themselves when you compare it with Hogsmeade.

Having said that, visiting Hogsmeade is still a lovely, fun day and not to be missed for the avid fan!

….”Escape From Gringotts” is still my favourite ride!