At the tail end of last week I had the privilege of being swept away to dine at Ramusake, the newest Japanese restaurant / late night club worth talking about in London. Residing in South Kensington, it’s neon sign calls to it’s elite members like the bat signal calls to the very man himself. 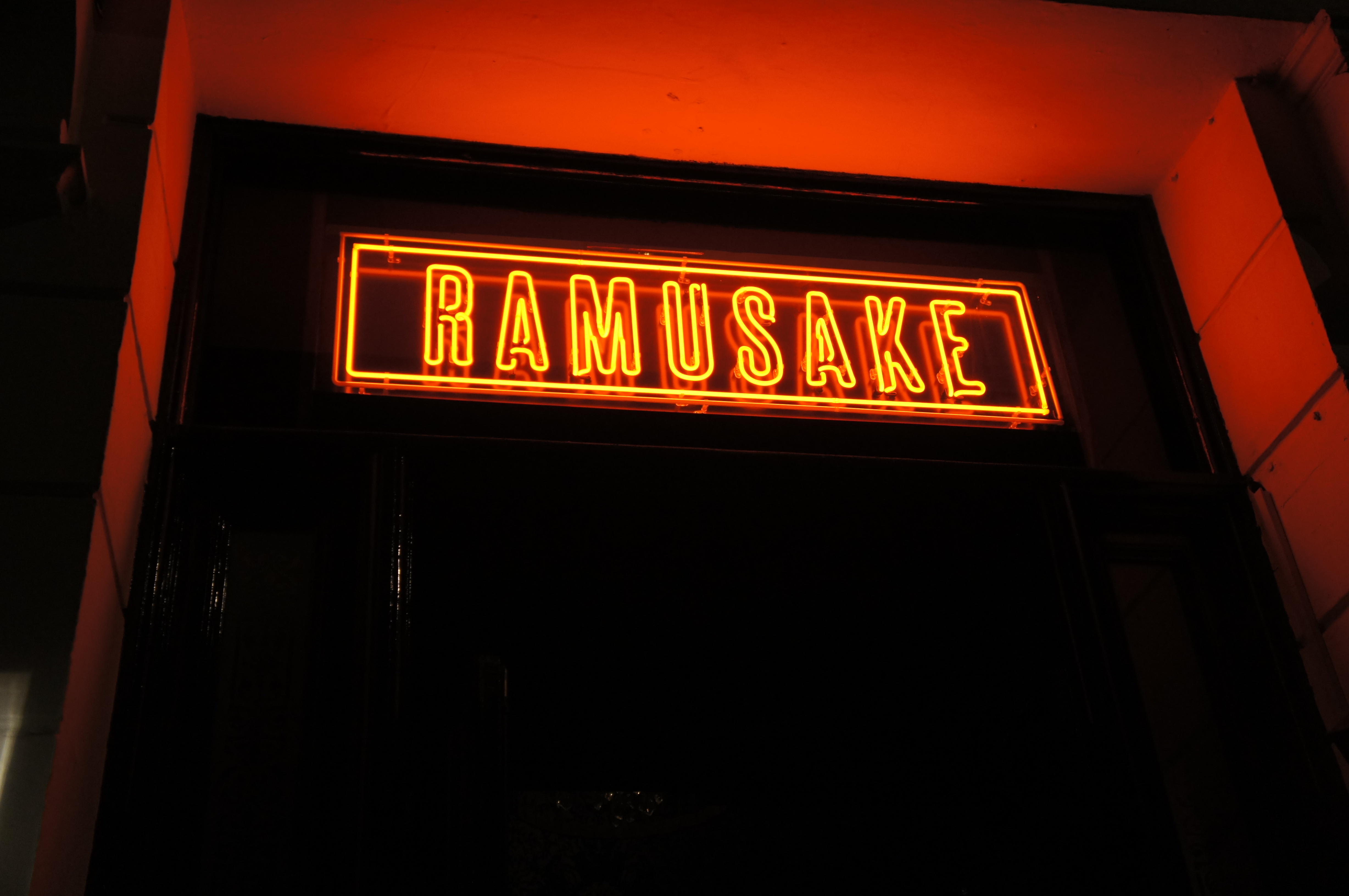 Upon arriving, we were met by friendly staff who welcomed us wholeheartedly, dressed in black and while our coats and scarves were being stowed, I took in the small corridor in front of us, carpeted, wallpapered and lit all in an enticing and – gosh darnit – very alluring way too – they had a chandelier inside a bird cage for goodness sake! 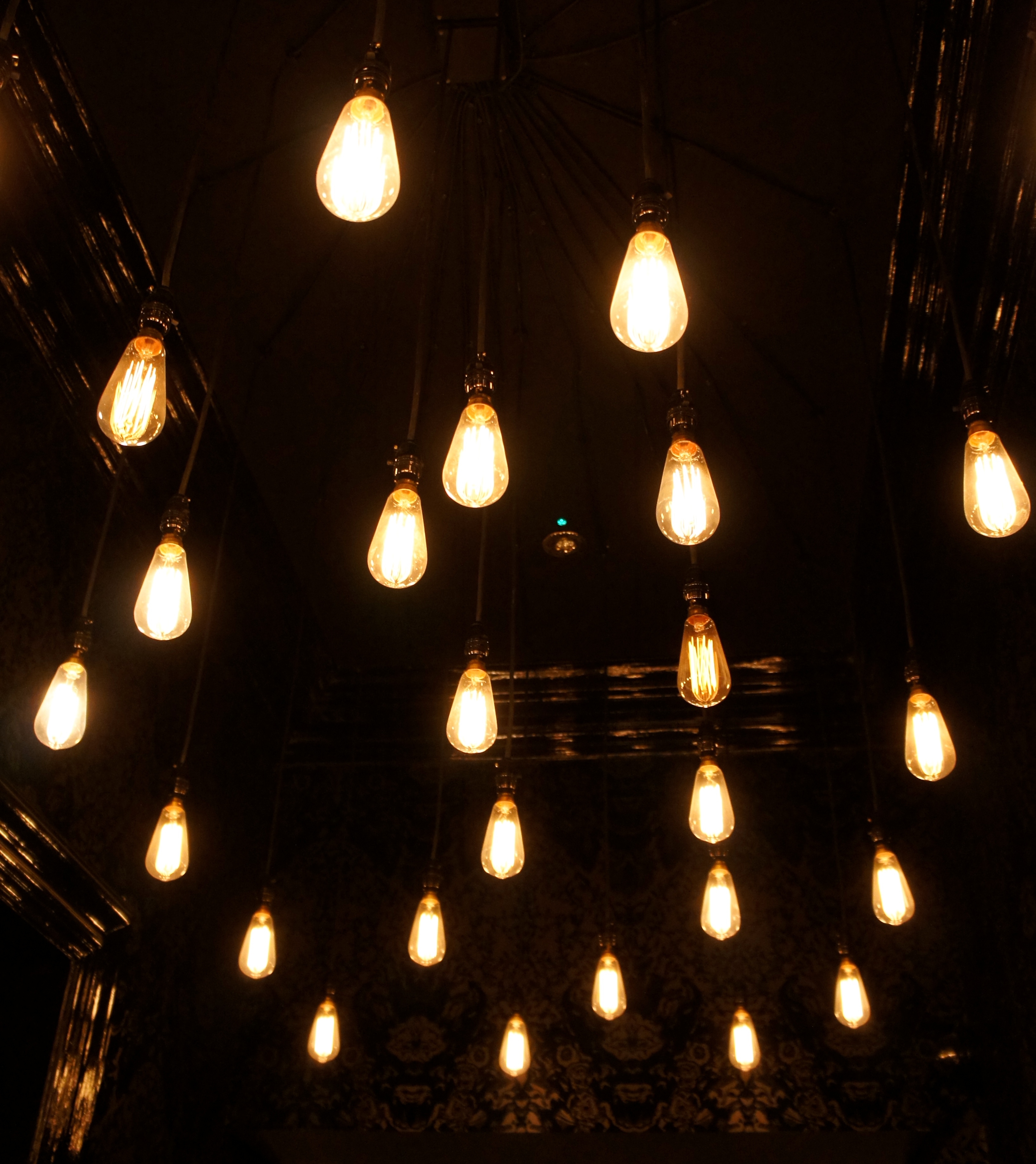 Lights guided our way from the friendly coat check girl down the dark and secretive stairs where, walking passed the lounge area and through the restaurant we were seated in Roscos domain – the bar. Rosco made my night, he chatted away to me like we were long lost friends, full of banter all the while whipping me up an incredible cocktail which was his own invention

I was promised sparkles – our friendship was affirmed

While he twirled behind the bar, pouring a bit of this and a dash of that into the mix, checking it, swishing it, rechecking it, then shaking my drink into oblivion, I realised there was such artistry to what he was doing, the bar was his stage and he was one of the most graceful dancers. He also had the good sense to ignore the fact that I was mesmerised by his moustache – it twirled up at the edges people! 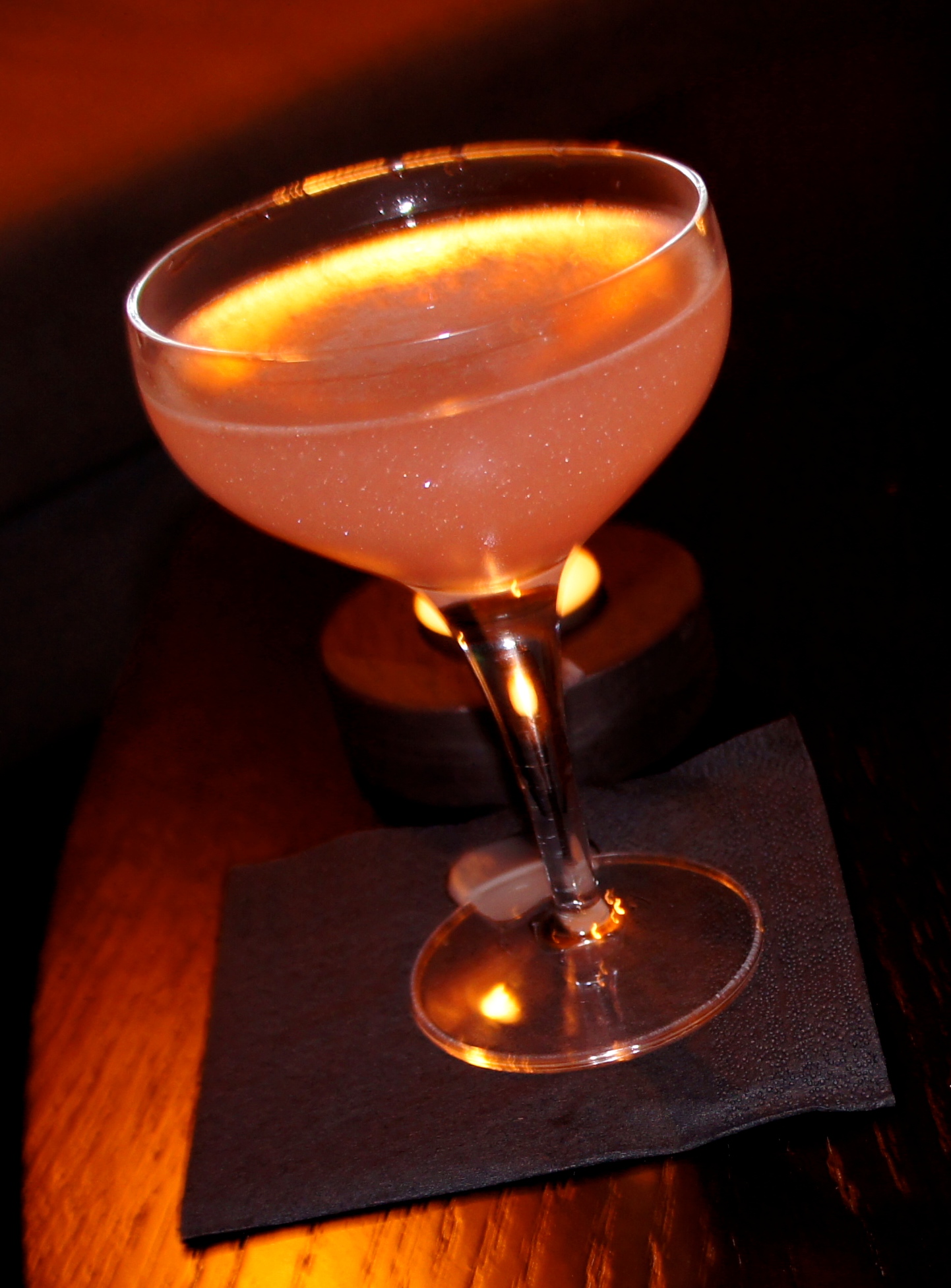 I was presented with Roscos creation and was not disappointed in the slightest, not only did it sparkle as promised – it was pink! I was in heaven, it tasted like more and that’s probably the highest compliment I could give him 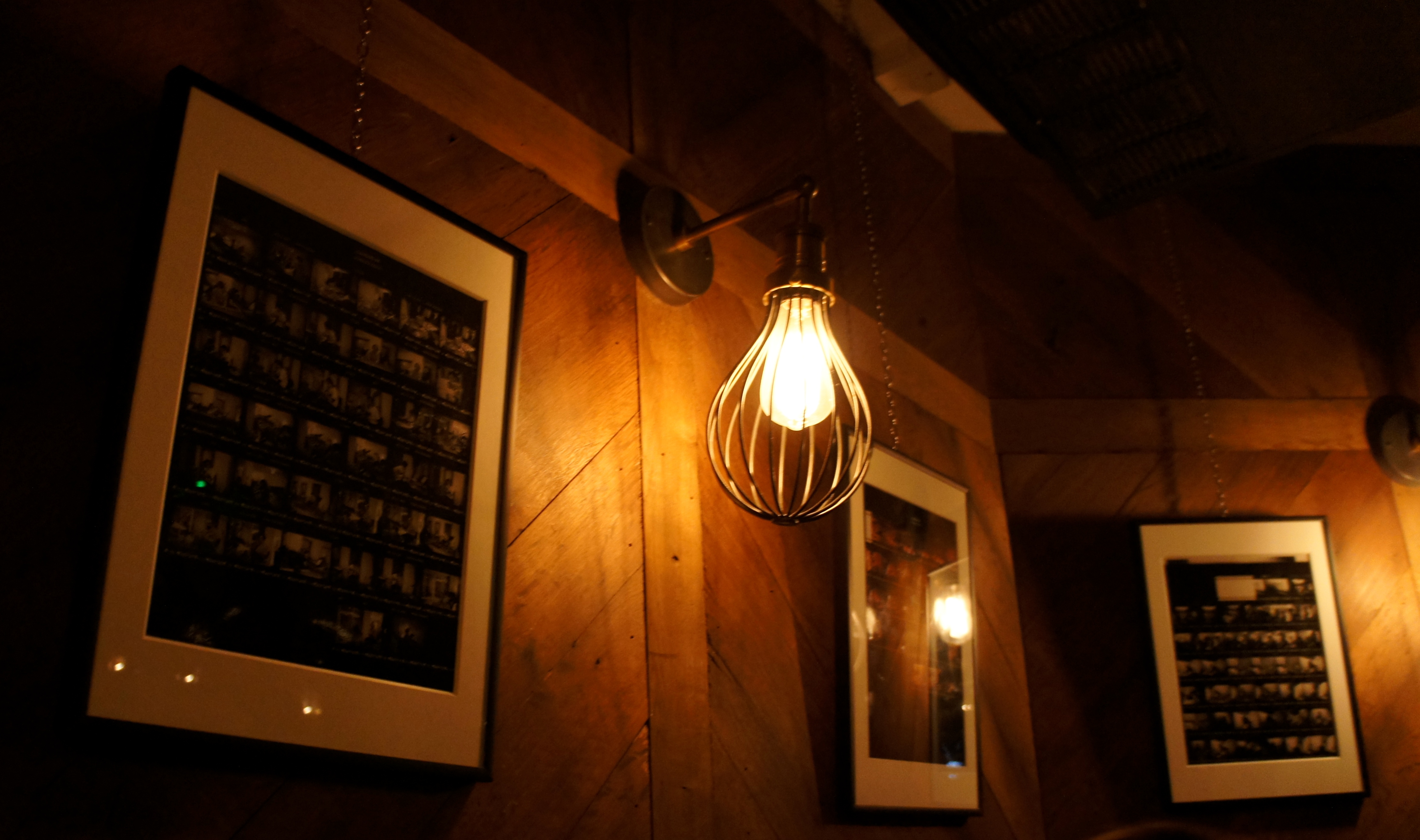 Along the walls of the seating area in the bar are framed contact sheets with two loupes hanging either side for viewing, a nice touch I thought 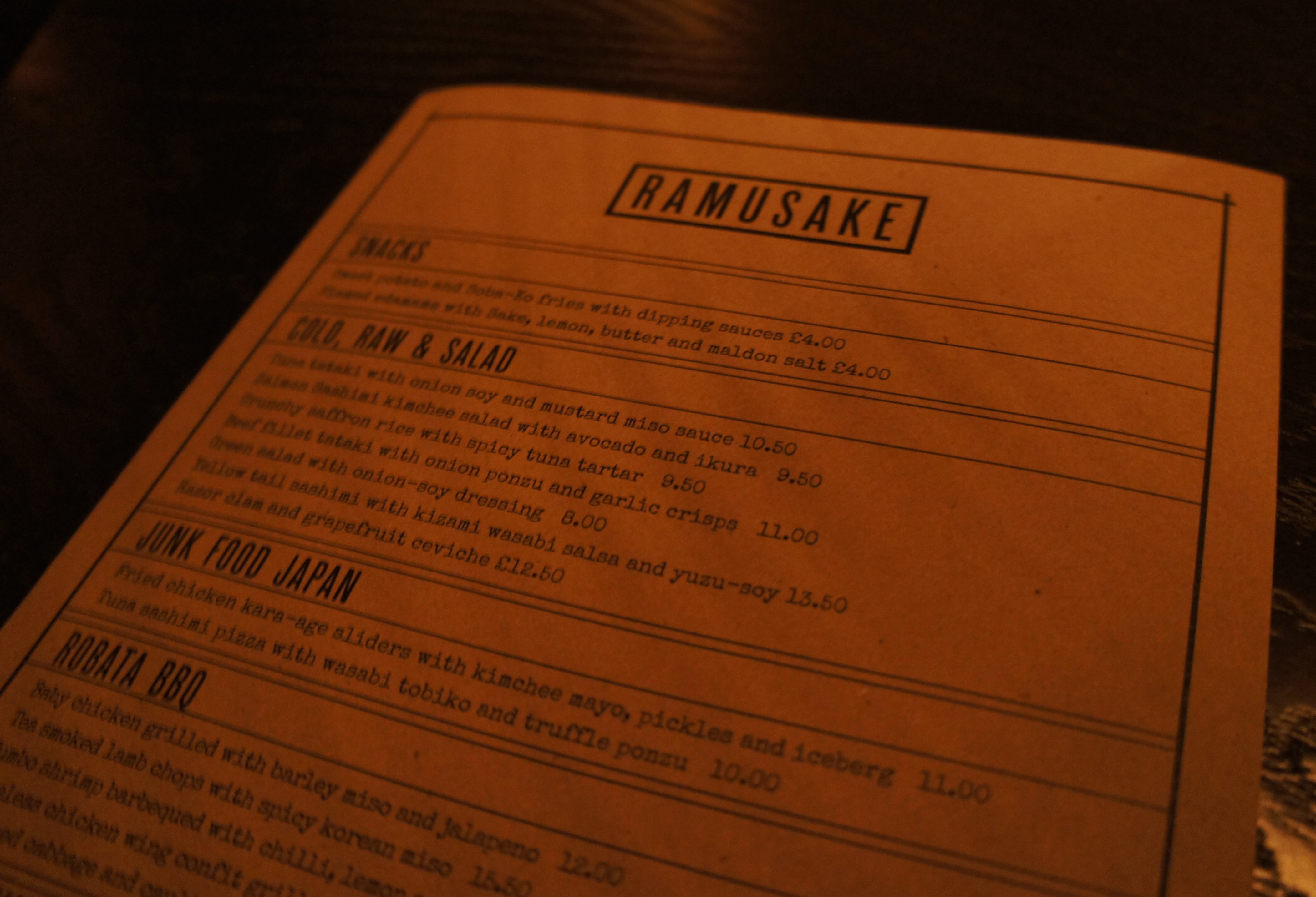 After Roscos cocktail, we were lead into the dining area and presented with the menu. While it isn’t extensive, it still has more than enough to suit the most adventurous – to the more shy of sashimi/sushi eaters amongst you (me included here!) 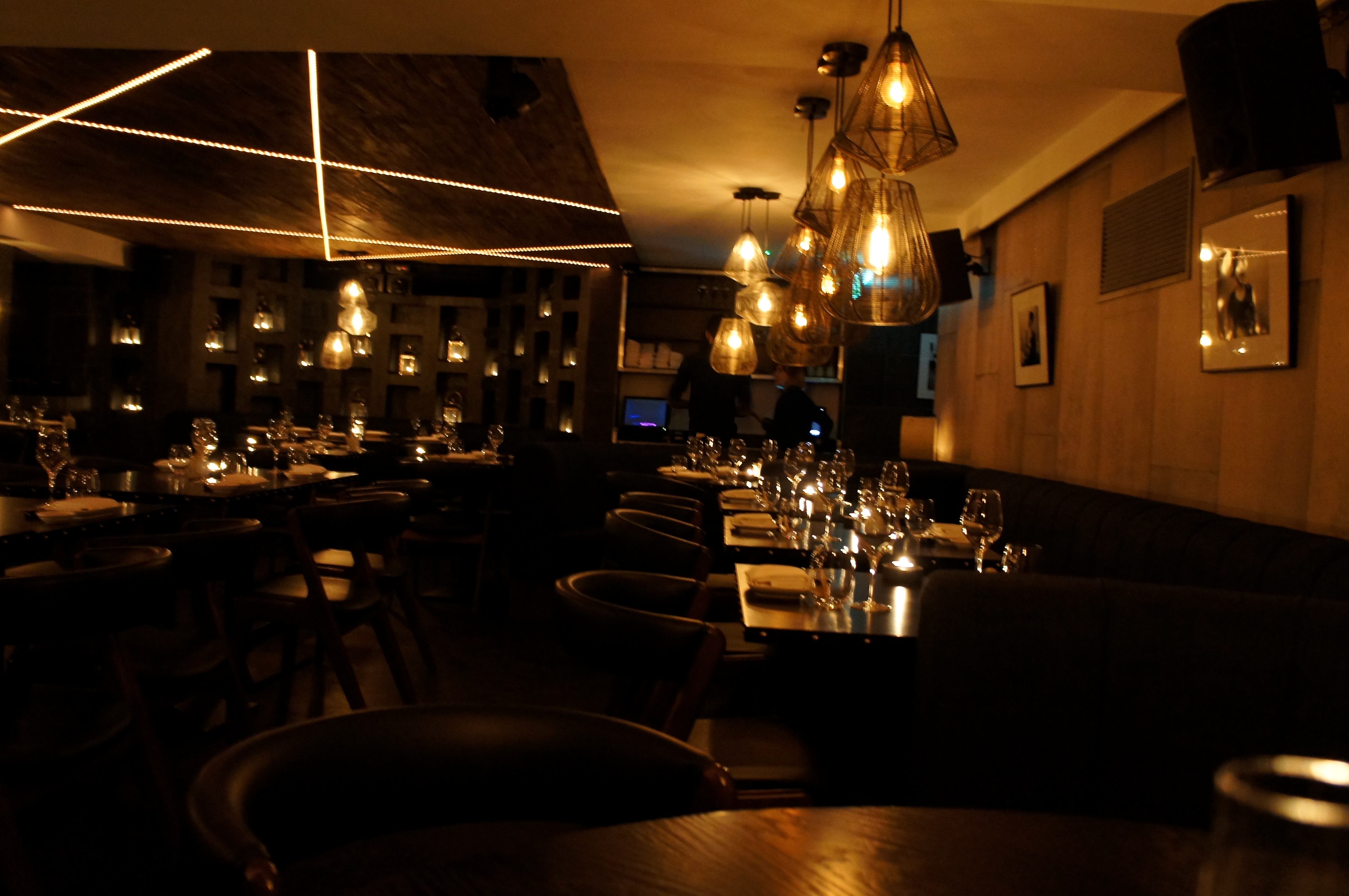 We were given the best seat in the house for people watching, a veritable whos who of Chelseas darlings were chatting and enjoying the certain anonymity which is afforded to them due to the ‘members only’ nature of Ramusake – plus it’s so dark it’s a shutterbugs nightmare to get a good snap! – all the same, I for one, don’t kiss and tell! 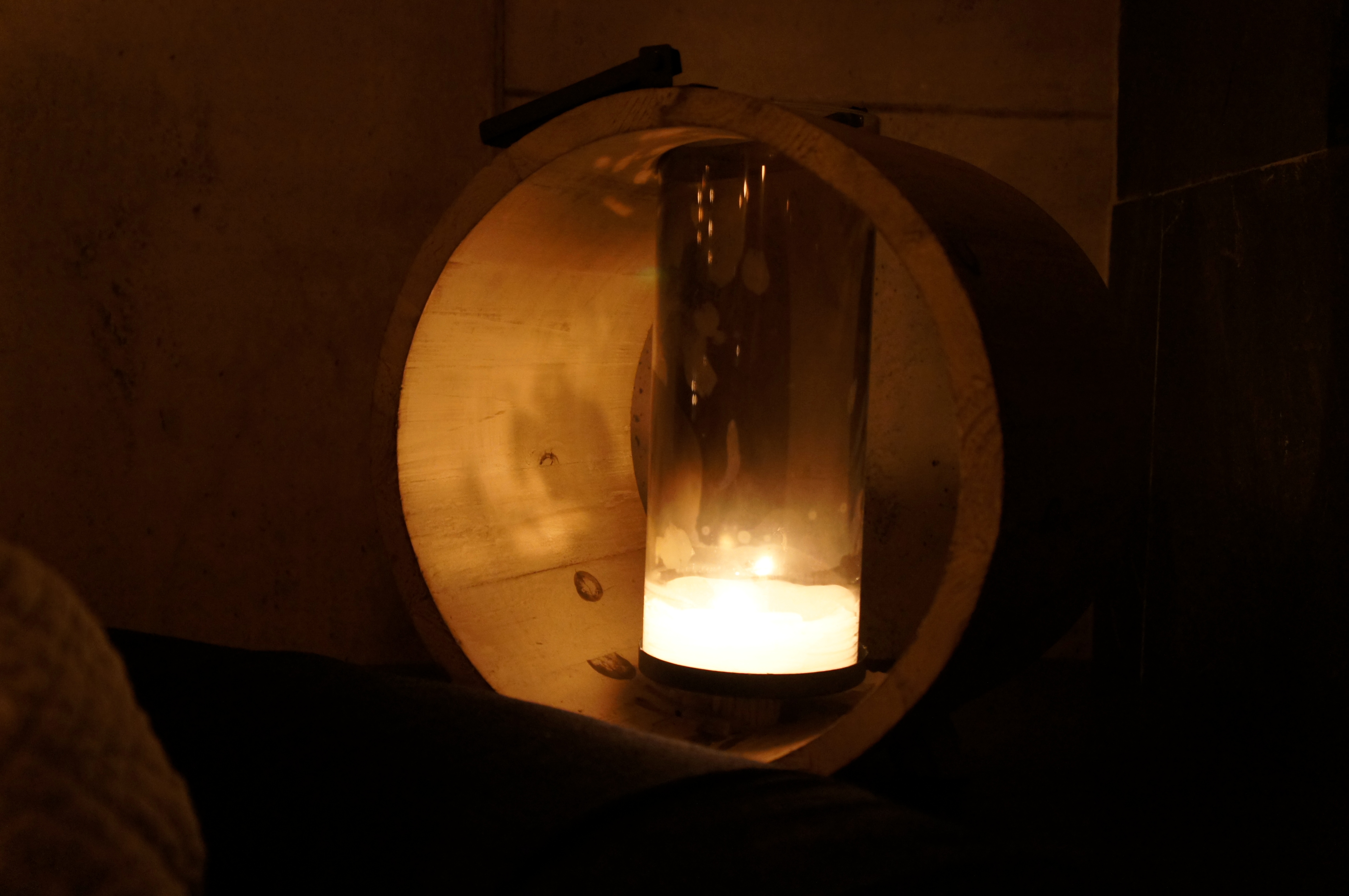 The decor is edgy but understated and as an avide candle lover, I was particularly happy with the amount of them dotted around the rooms 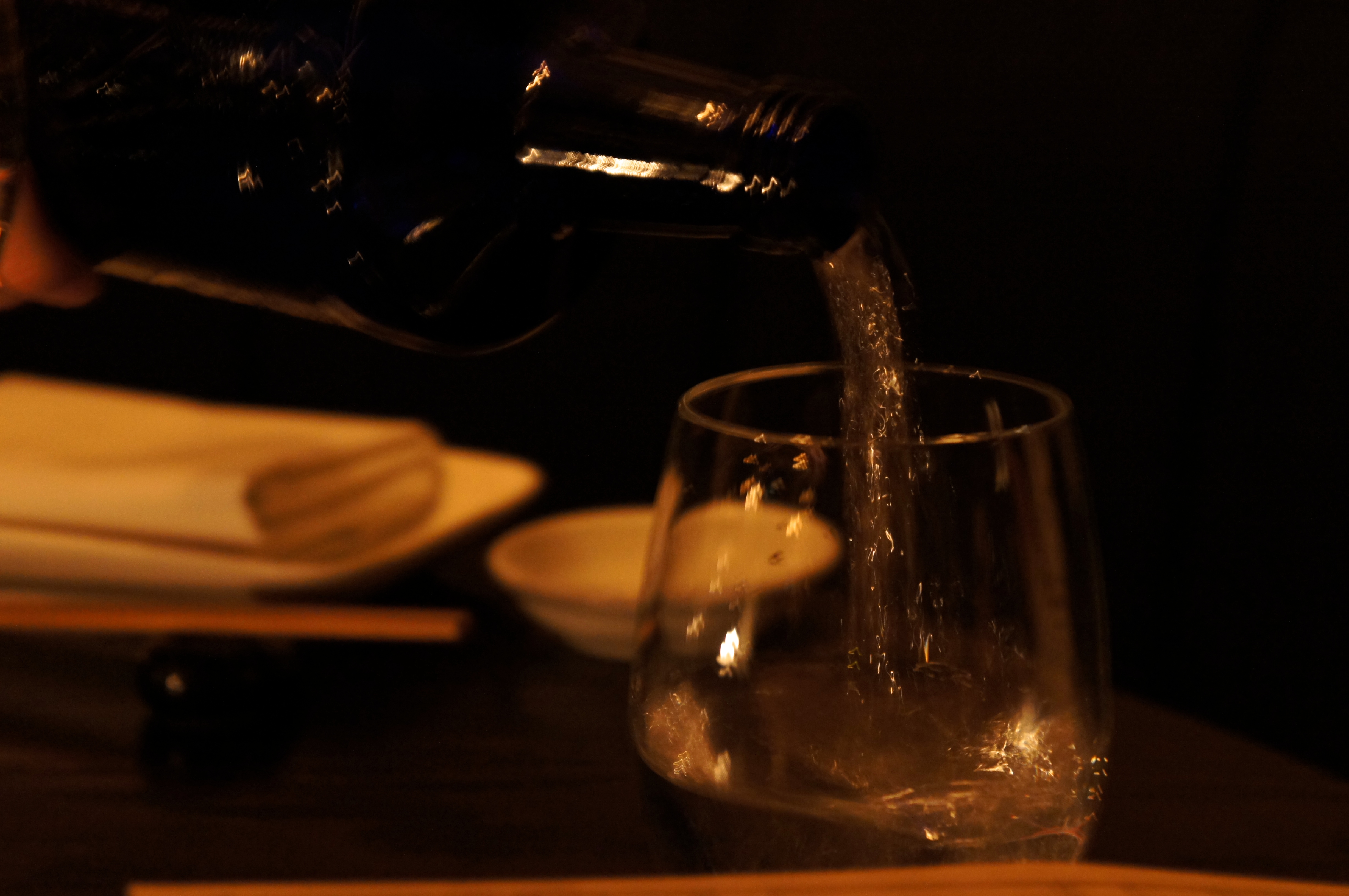 All the wait staff we came into contact with were smart, efficient and very friendly. They’re happy to assist with explanations of the menu and to answer clients random questions – like how long it took for one lady to get all her tattoos (just one of them took 20hours – FYI – I quite nearly passed out from the thought) 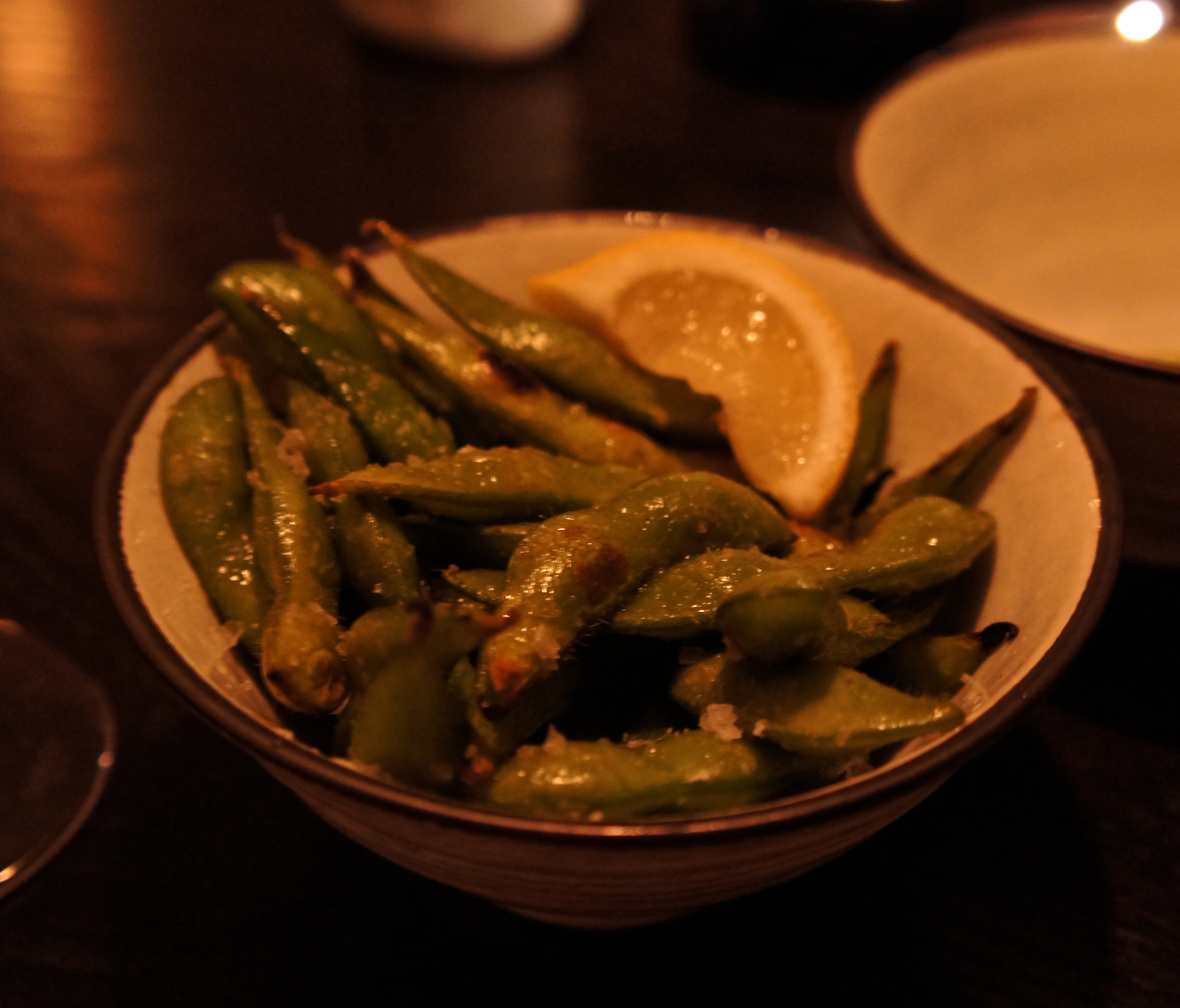 We began with edamame beans, they were drowned in sake, butter, lemon and maldon salt – in other words, they were perfect 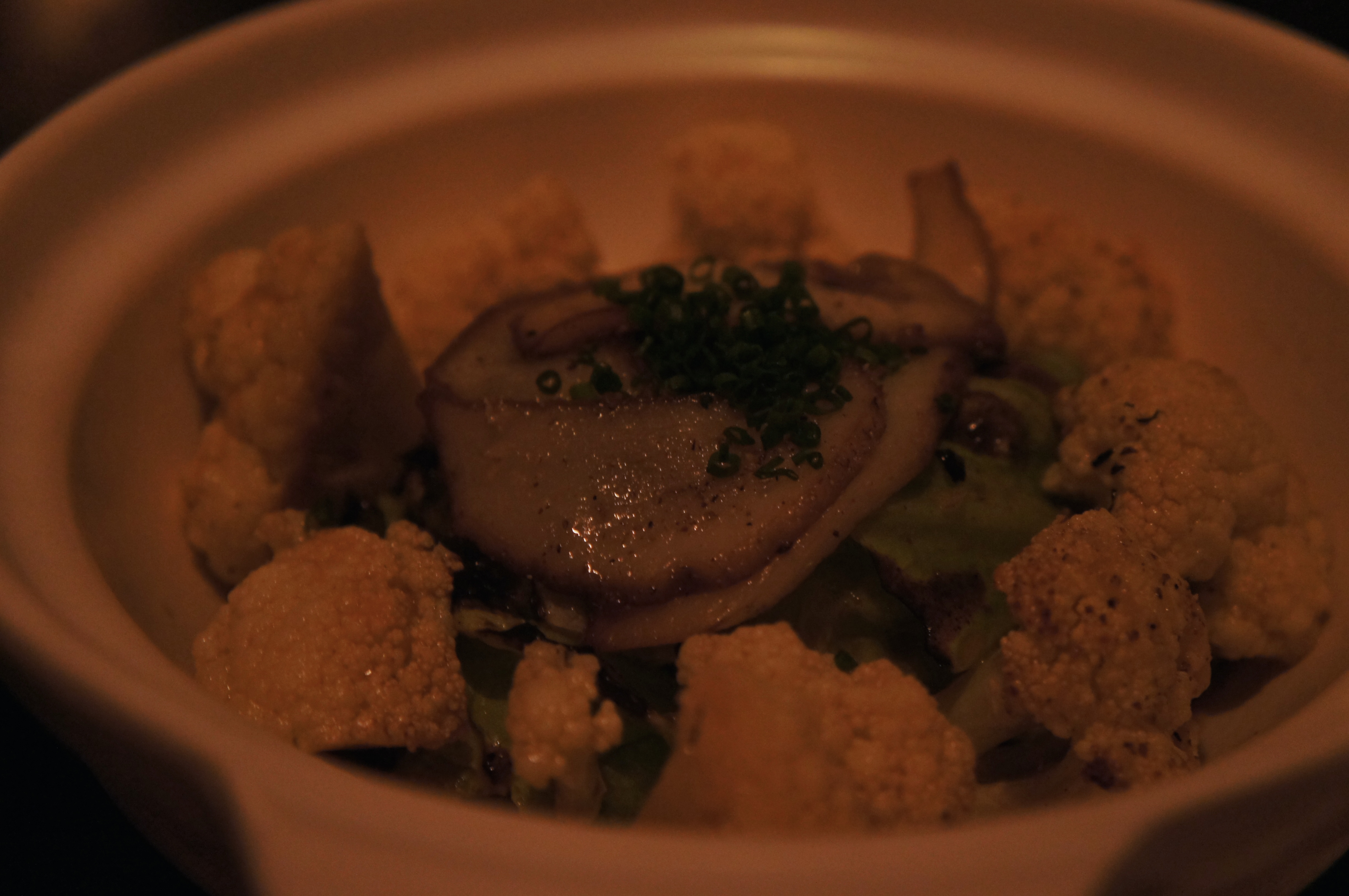 Next we were brought cauliflower and mushrooms with cabbage in a soy sauce (did I mention this place is dark?!), I am sure there is a much MUCH fancier way of describing this dish, but no matter, it was delicious and the sauce just set the whole thing off – if a spoon had been in sight, we would’ve lapped up every last bit 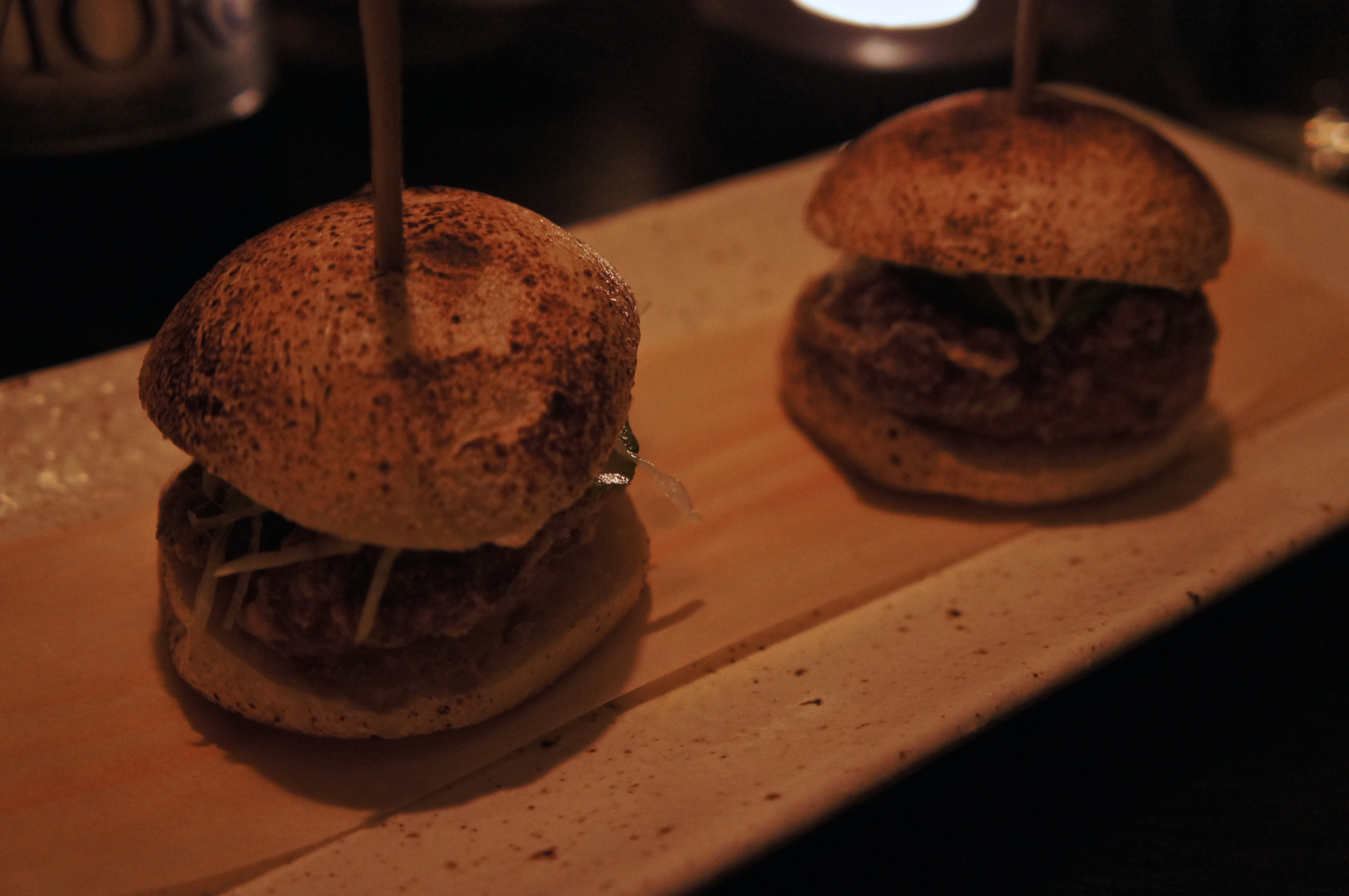 On the menu these next yummies are listed under the “Junk Food Japan” section, they’re fried chicken kara-age sliders with kimchee mayo, pickles and iceberg. For the non fishie diner, these are your go to on the menu and you’ll probably be requesting a second plate, ours were devoured thoroughly, not a crumb spared – oh I do think they’re worth another look don’t you?! 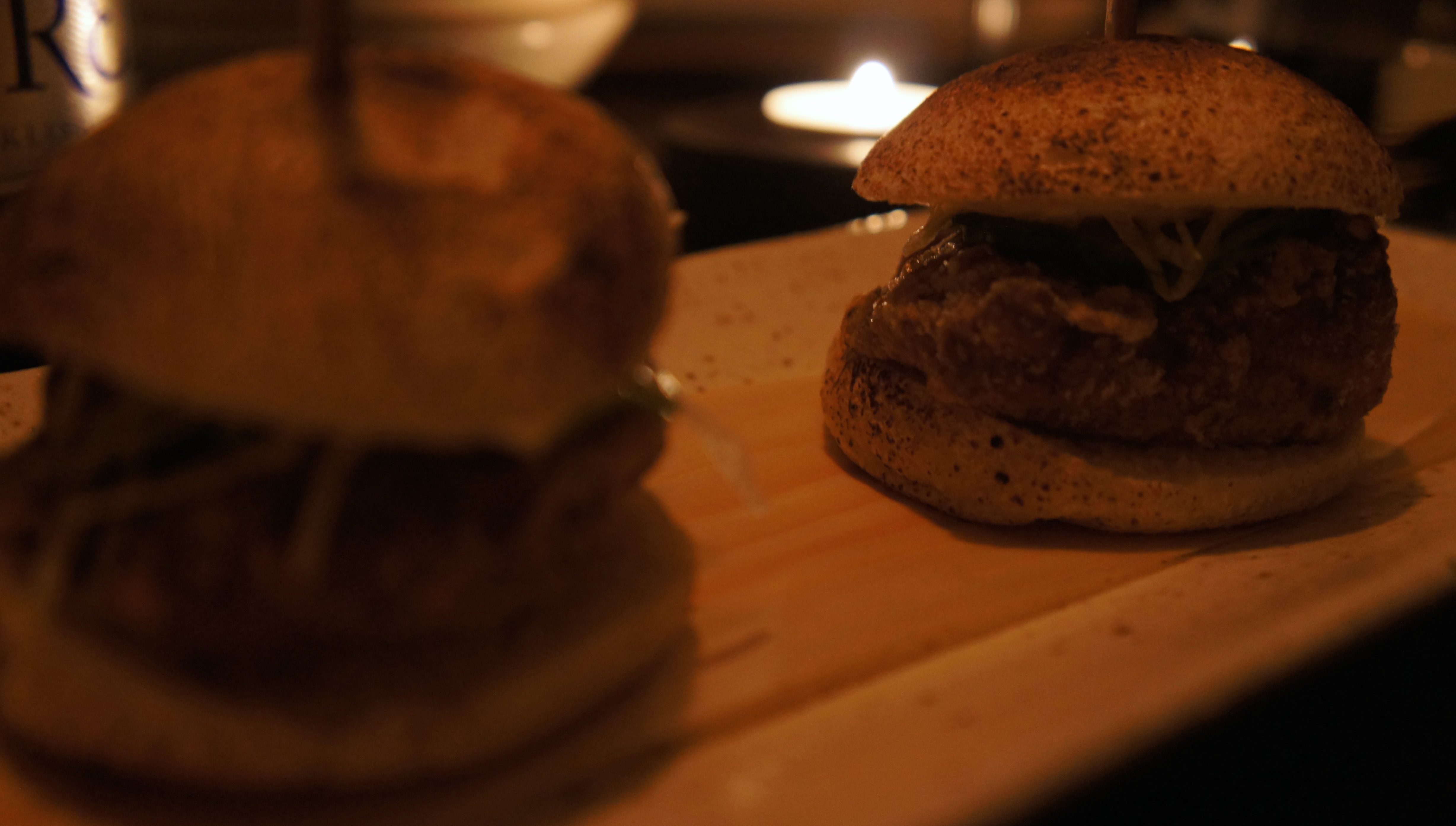 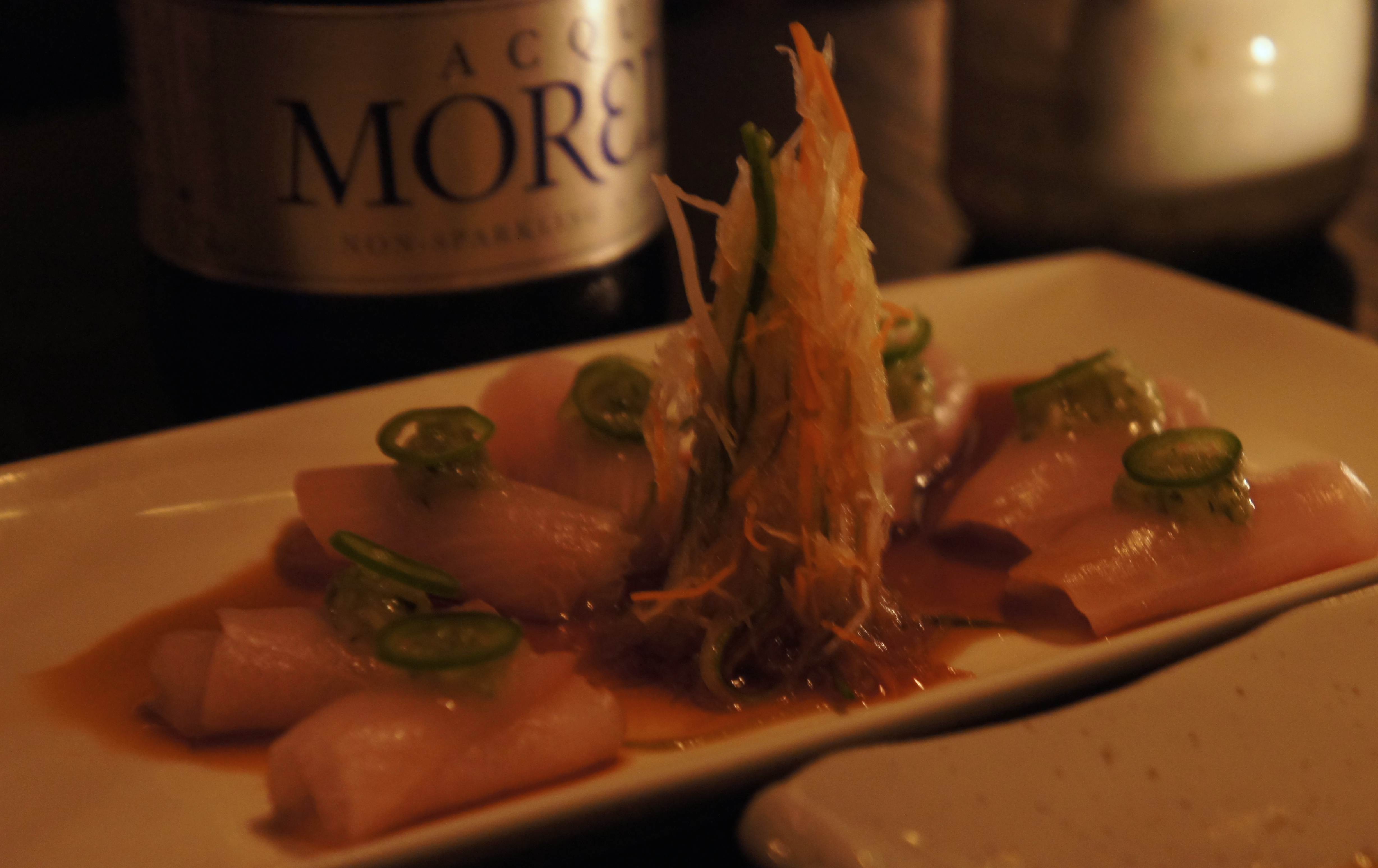 ^ Yellow tail sashimi with kizami wasabi salsa and yuzu-soy. My fellow diners told me, if I could handle that dish, I’d be pretty much golden with any other type of sashimi/sushi in the future. Sometimes I get more put off by strong fishy after tastes than the texture or anything else, but this was lovely, smooth and fresh, no complaints at all! 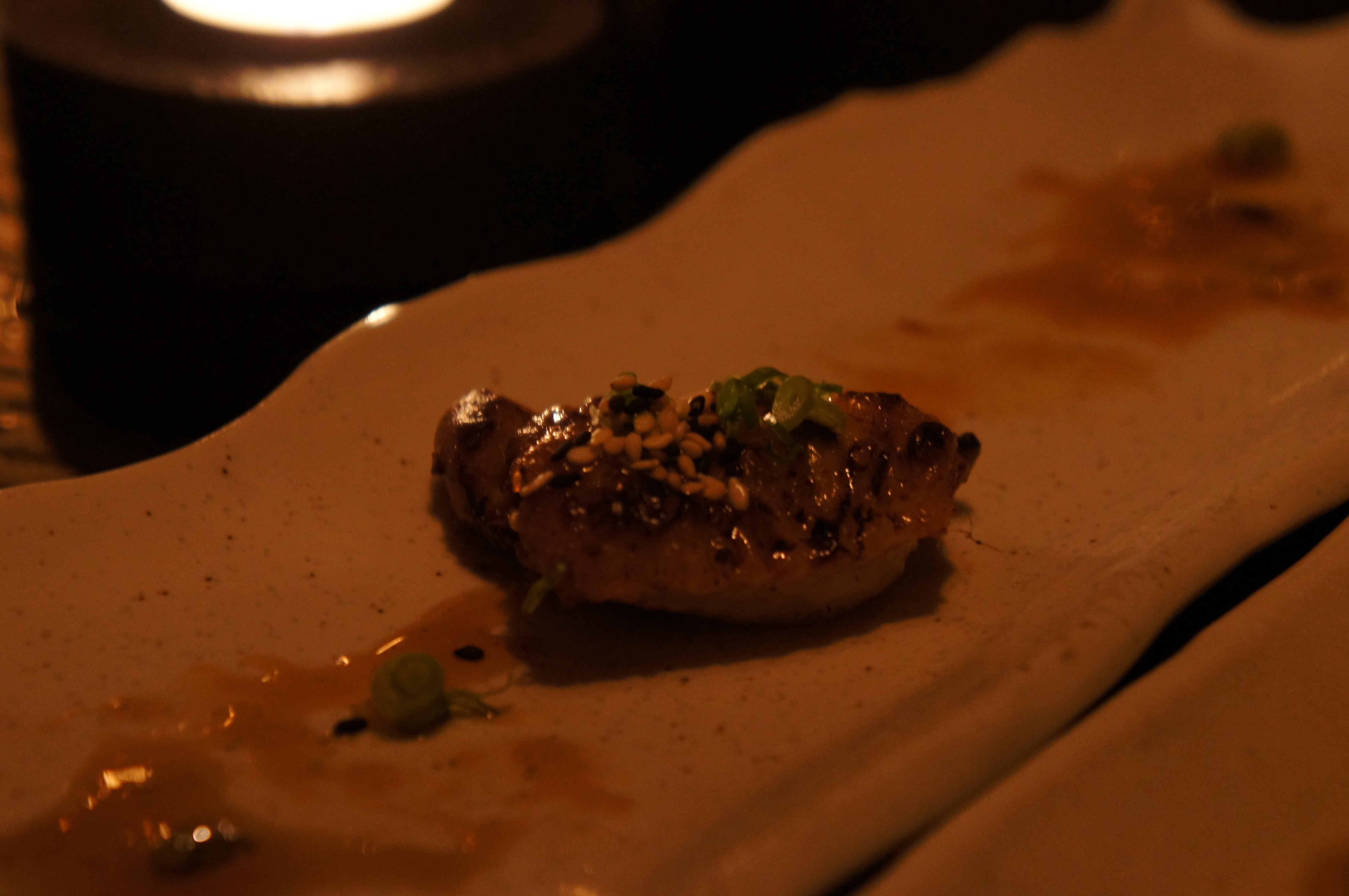 The boneless chicken: I literally had to scold the others into submission so that I could have a moment to take a snap of this little gem for you! Although I found a few bones in my piece, no one else did and to be honest, it didn’t much matter as the flavours of the confit did the merengue with my tastebuds! 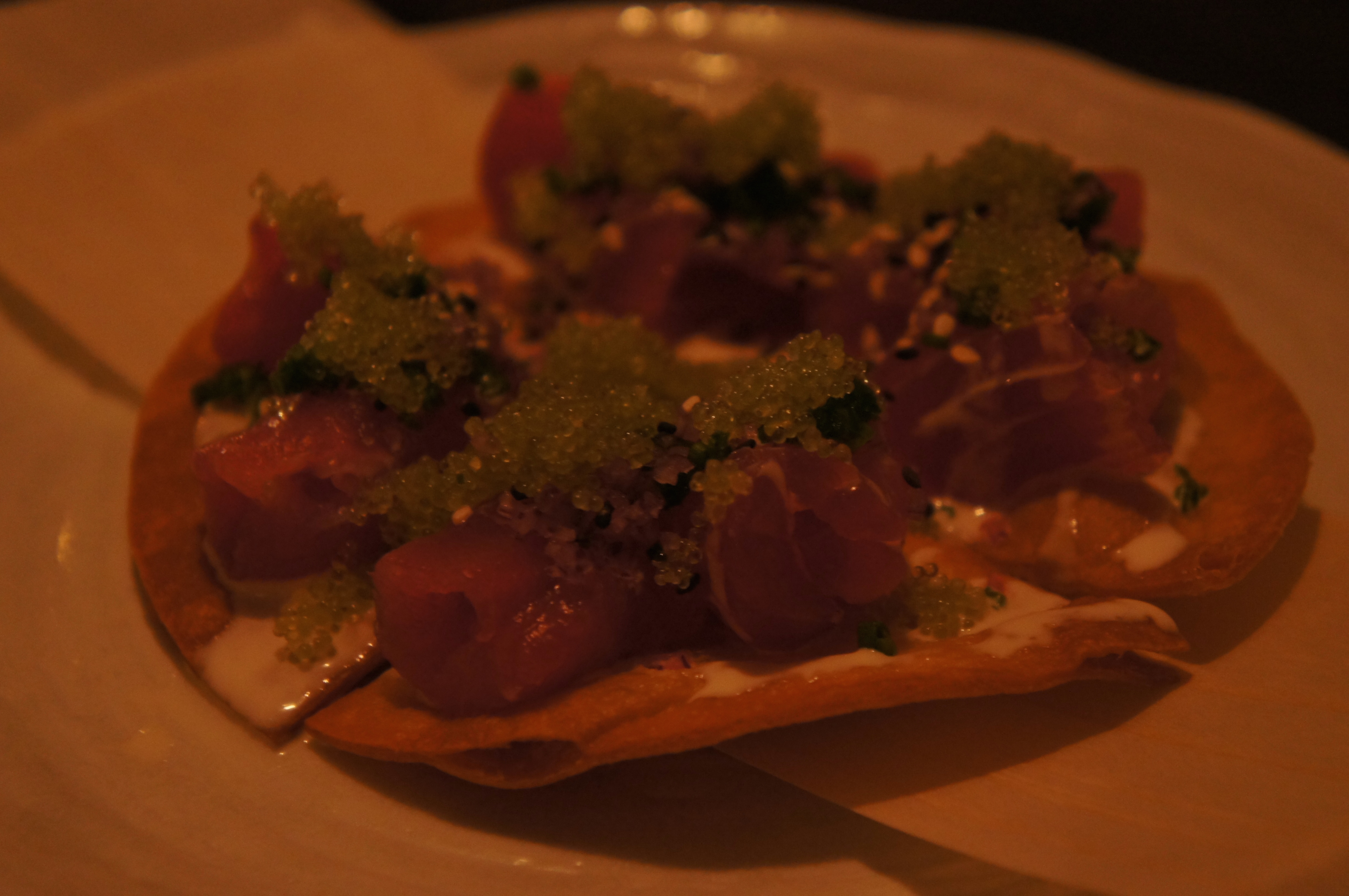 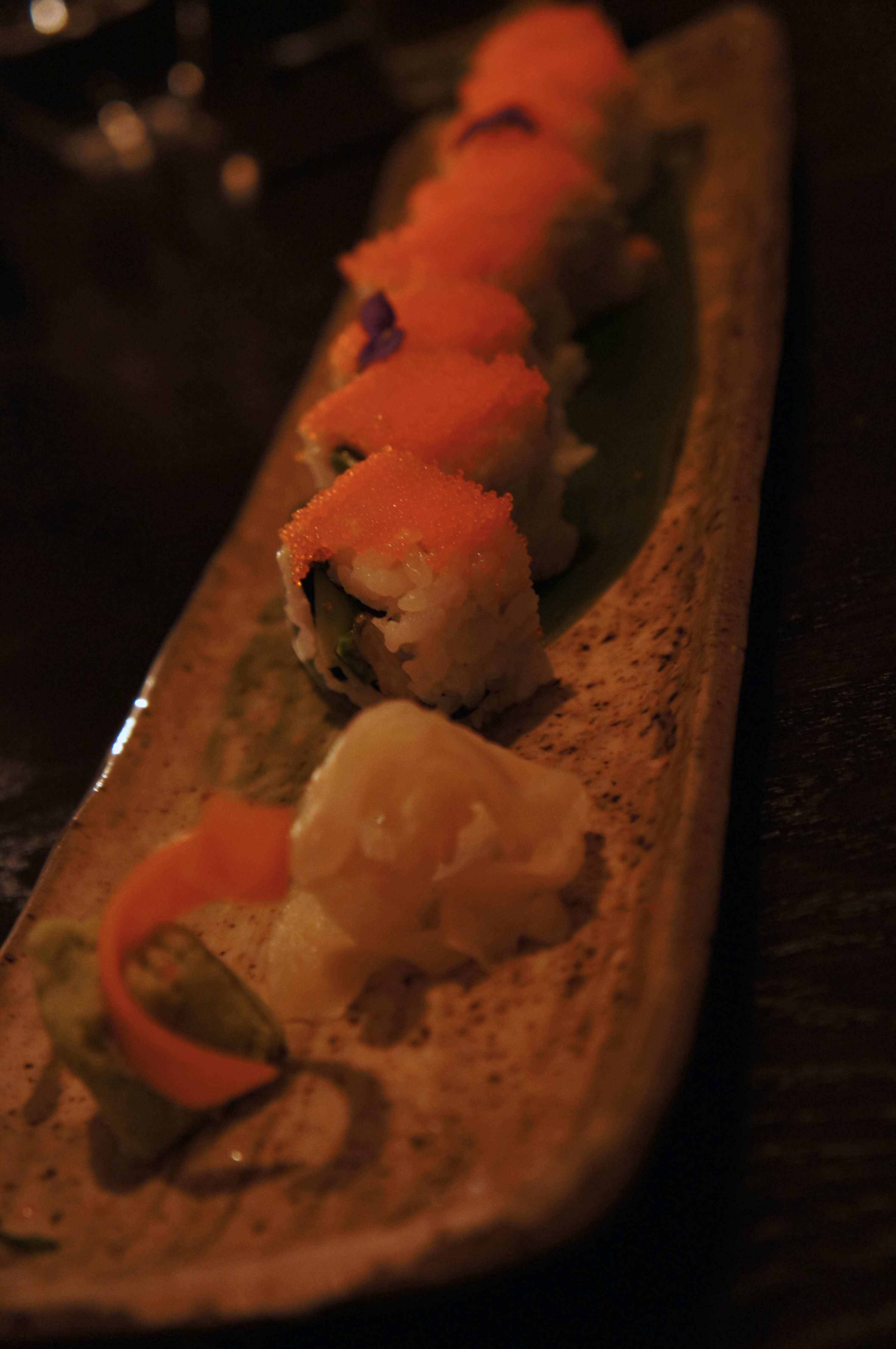 My absolute favourite of the evening, was the crab – get it, honestly, don’t over think it, you can thank me later – just divine! Lets have another look 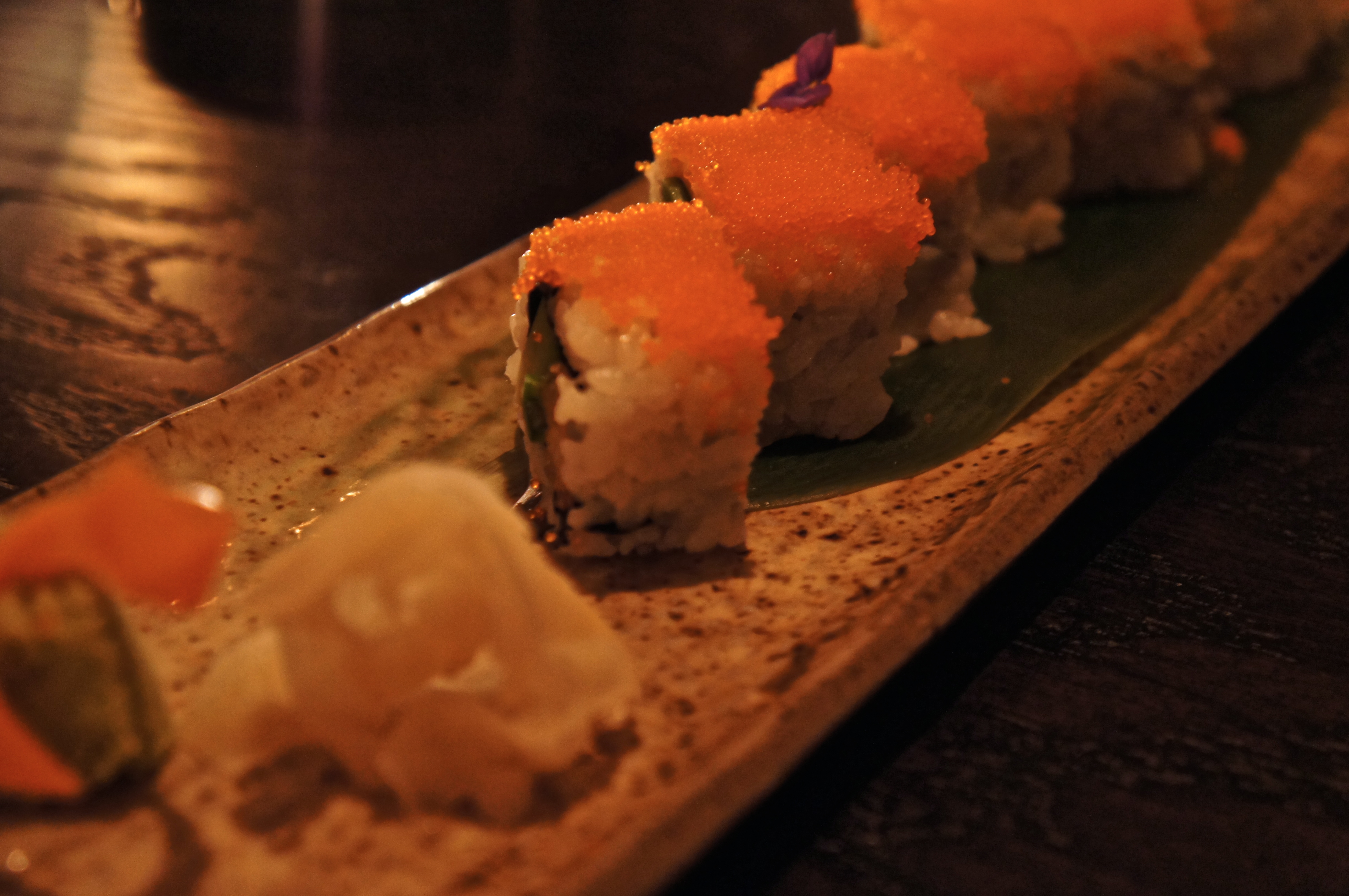 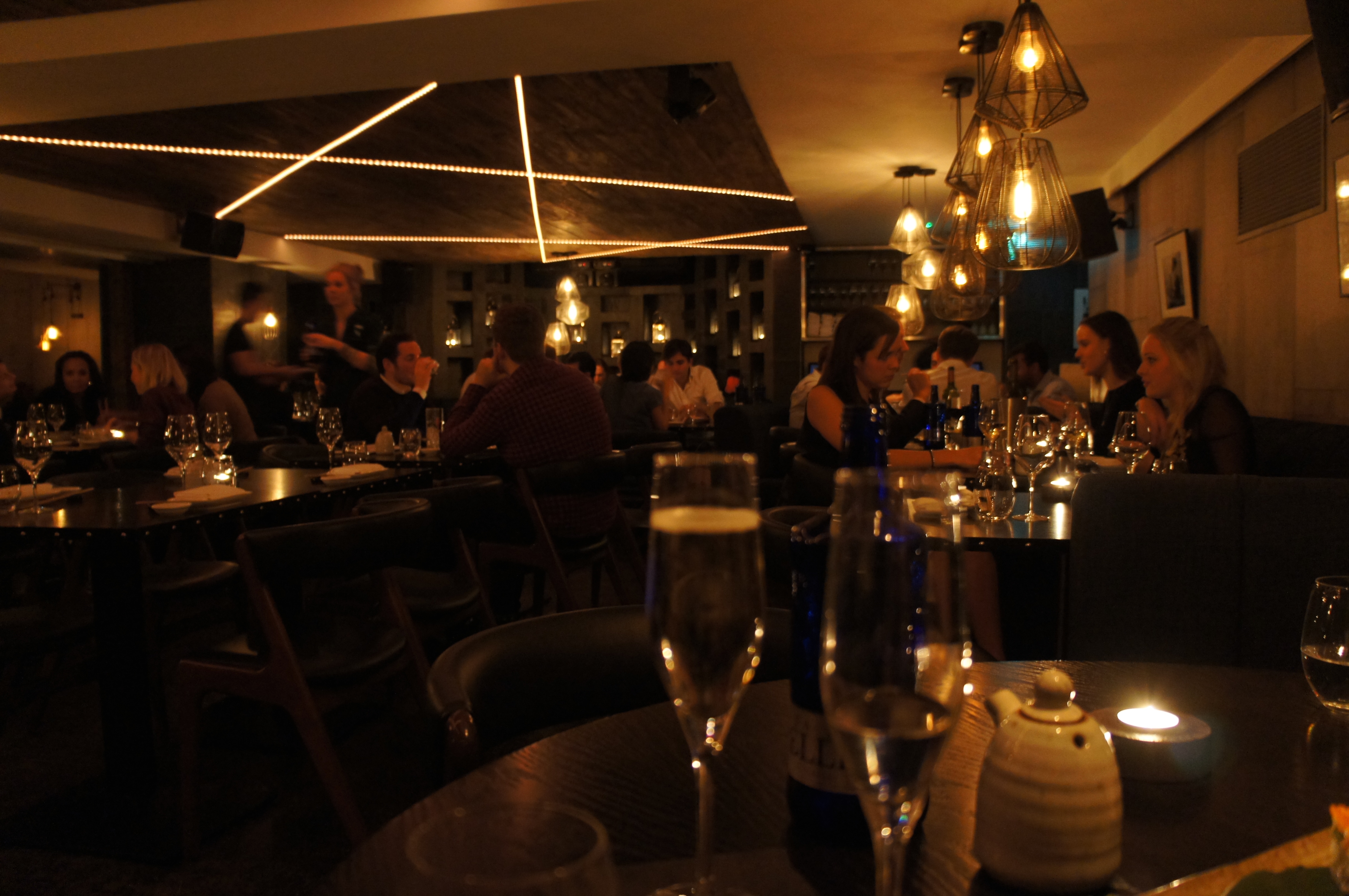 As we wrapped up our sparkling conversation and the last few morsels of food (beef fillet tataki with onion ponzu and garlic crisps – another firm table favourite) we departed before Ramusake turned into a heaving night club. We were bade goodnight by all the staff we passed, adding to my enjoyment of the place – it really felt like I was winding my way through a gathering of friends saying goodbye en route to the door, rather than leaving a trendy new restaurant!

Although, in case I’d forgotten where I was – the artwork soon reminded me…! 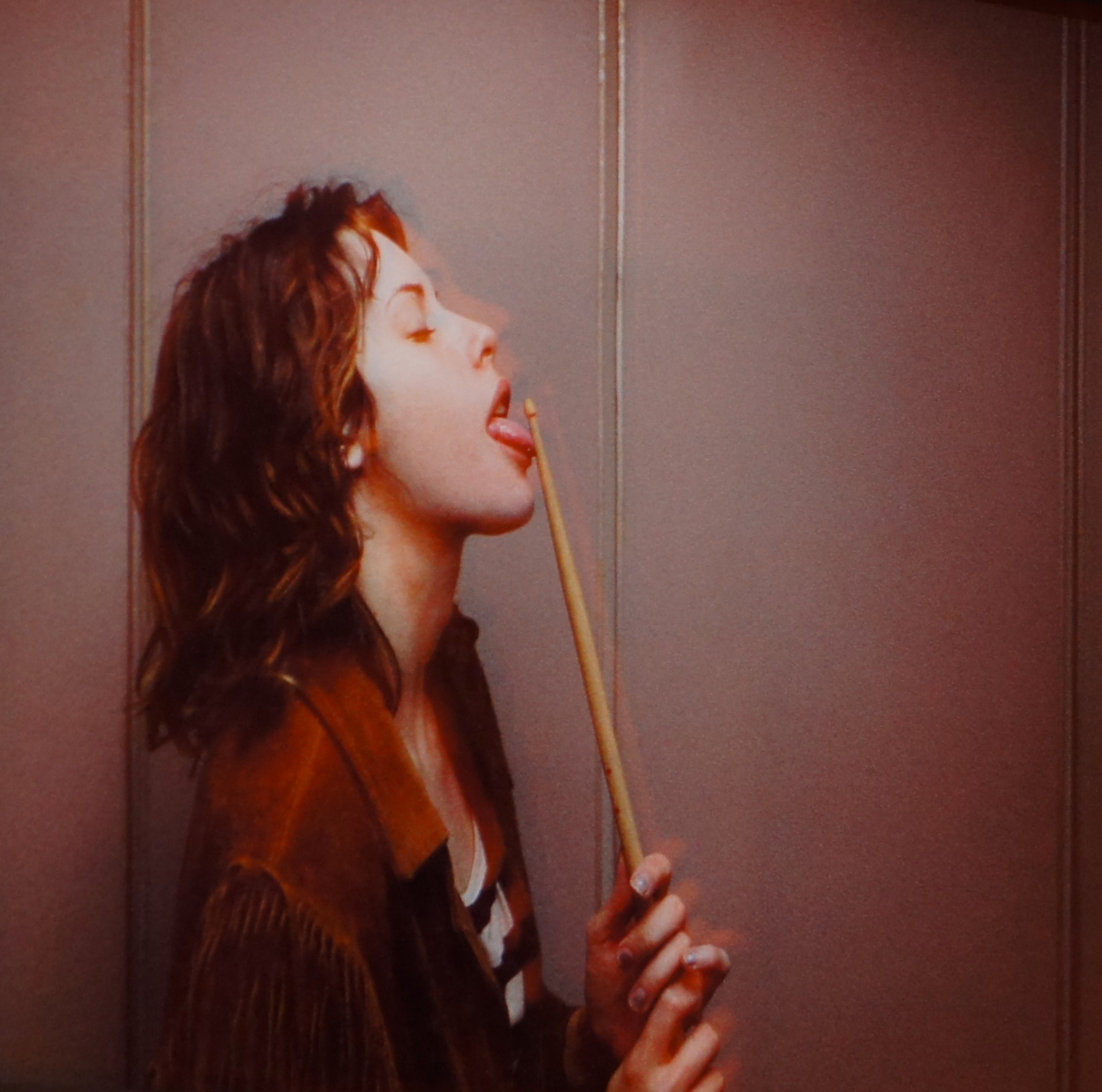 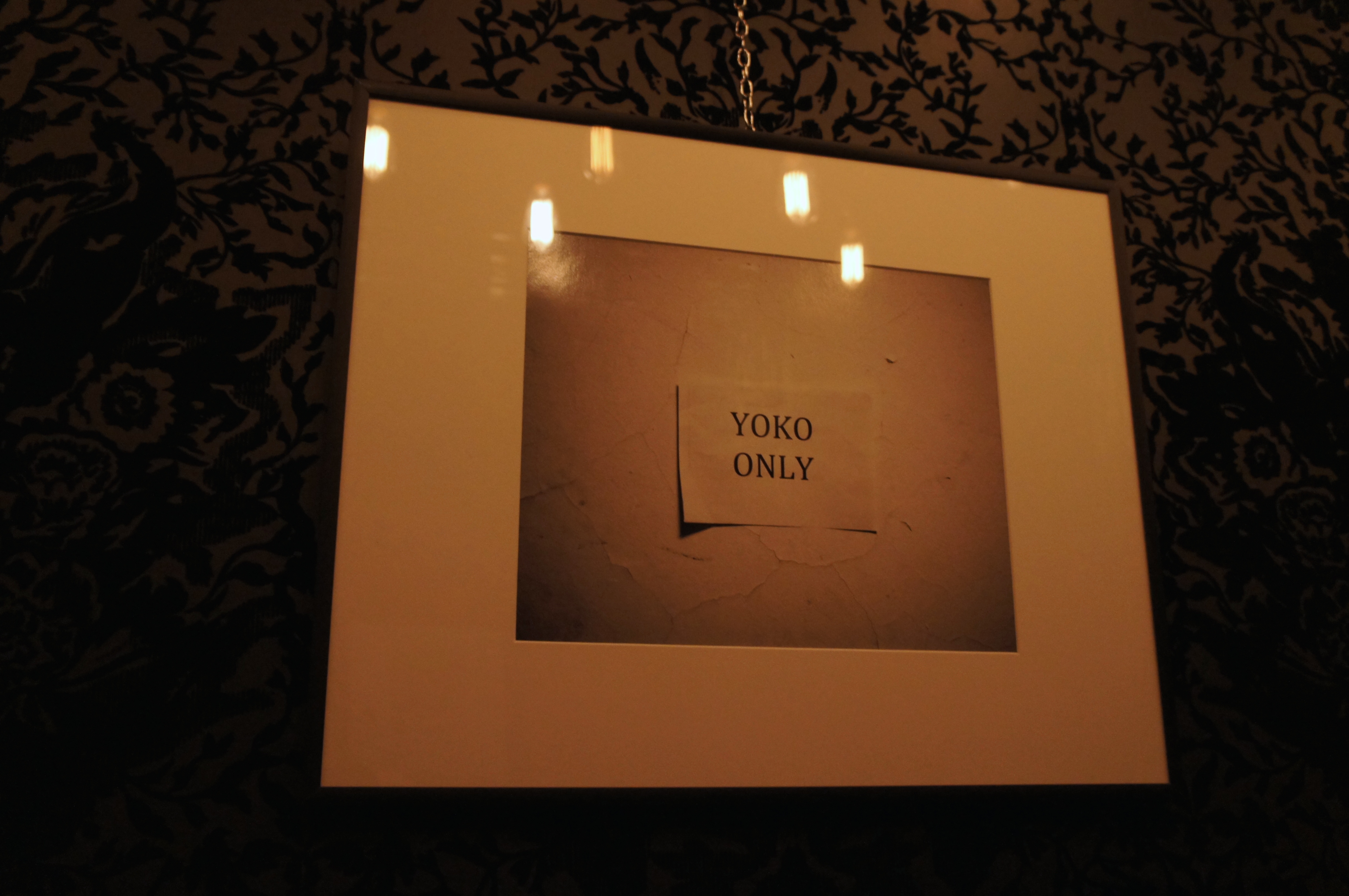